Marquette University has had a successful first run with their seasonal dome in the Menomonee Valley. The inflatable dome, which will come down next week, was installed in January at a cost of approximately $3.6 million over a portion of the university’s Valley Fields complex. When it returns next year the dome will sport new signage promoting Marquette. The city’s Zoning, Neighborhoods & Development Committee approved the design change on Tuesday, but not before one alderman could object to indoor sports.

Alderman Nik Kovac isn’t impressed by the dome. In his questioning of the project he stated “I am relieved for half the year this won’t be up there. I wasn’t thrilled to see a replica of the Hubert H. Humphrey Metrodome in my outdoor city.” Kovac, who hosts a weekly radio on Riverwest Radio about the Green Bay Packers, was referencing the Minnesota Vikings former stadium in downtown Minneapolis. That stadium, which stood from 1982 to 2014, had a white inflatable roof similar to the Marquette dome. The dome famously deflated four times, something the Marquette representatives indicated they were pleased had not happened to their dome.

Kovac, a fan of outdoor stadiums such as Lambeau Field, went on to note that he thought the outdoor environment gave an advantage to Marquette athletes during games, referencing a recent Marquette lacrosse game in inclement weather he attended. Marquette project manager Joel Smullen noted that a number of other universities have similar domes for their athletics, including the University of Minnesota.

While he isn’t a fan of domes, even the seasonal one that adorns the campus of his alma mater Harvard University (as I noted to him after the hearing), Kovac ultimately supported the Marquette design change. “I’m not going to object to this,” he said, “the signage makes it nominally better.” The committee unanimously approved the change.

The new signage, two 30-foot by 30-foot signs, will be installed on the north and east sides of the dome. They will be illuminated by LED lights mounted to light poles currently installed to illuminate the outdoor fields. According to documents submitted to the city the dome stands 72-feet tall and is 240-feet wide by 360-feet long.

The dome, which by a zoning variance for the site is allowed only for six months at a time, will return in late October/early November and be removed again in April 2018. Once deflated, the dome and its related equipment requires about 5,000 square-feet of storage space that the university leases from a third party.

The dome has been heavily used seven days a week by the university’s athletics teams, including golf, as well as club and intramural sports teams. The field the dome covers is FieldTurf’s Revolution 360 artificial turf. Marquette representatives told the zoning committee that the university currently is unable to allow outside organizations to use the facility because of the heavy university use. Alderwoman Milele A. Coggs noted that someone has recently approached her about constructing a dome in her district.

According to an October 2016 release by the university the dome “is being funded primarily by generous athletic donors and the Department of Intercollegiate Athletics.” CD Smith constructed the dome, while Sink Combs Dethlefs provided architectural services and GRAEF provided engineering support. The dome is expected to last 25 years. 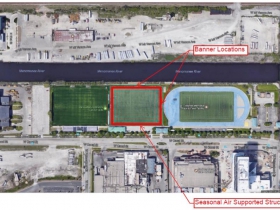 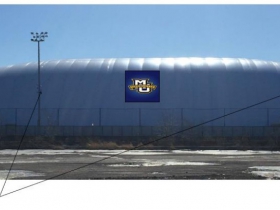 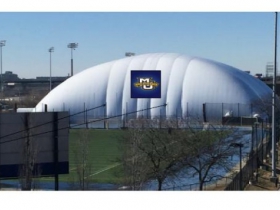 At the end of the hearing potential changes for the 16th Street Viaduct were discussed. Alderman Jim Bohl raised the issue, noting that it’s the primary route for students to get from the Valley Fields at 1818 W. Canal St. to campus. The alderman noted that vehicles cross the bridge at high speeds, while pedestrians are left with only a small, unprotected sidewalk to walk on. The Marquette representatives noted that they have had preliminary discussions with the city’s Department of Public Works on ways to improve the pedestrian experience on the bridge.

One thought on “Eyes on Milwaukee: Marquette Updating Inflatable Dome”