Experts jab local non-profits; they keep growing, but so does poverty.

By Jabril Faraj, Milwaukee Neighborhood News Service - May 2nd, 2017 11:31 am
Get a daily rundown of the top stories on Urban Milwaukee 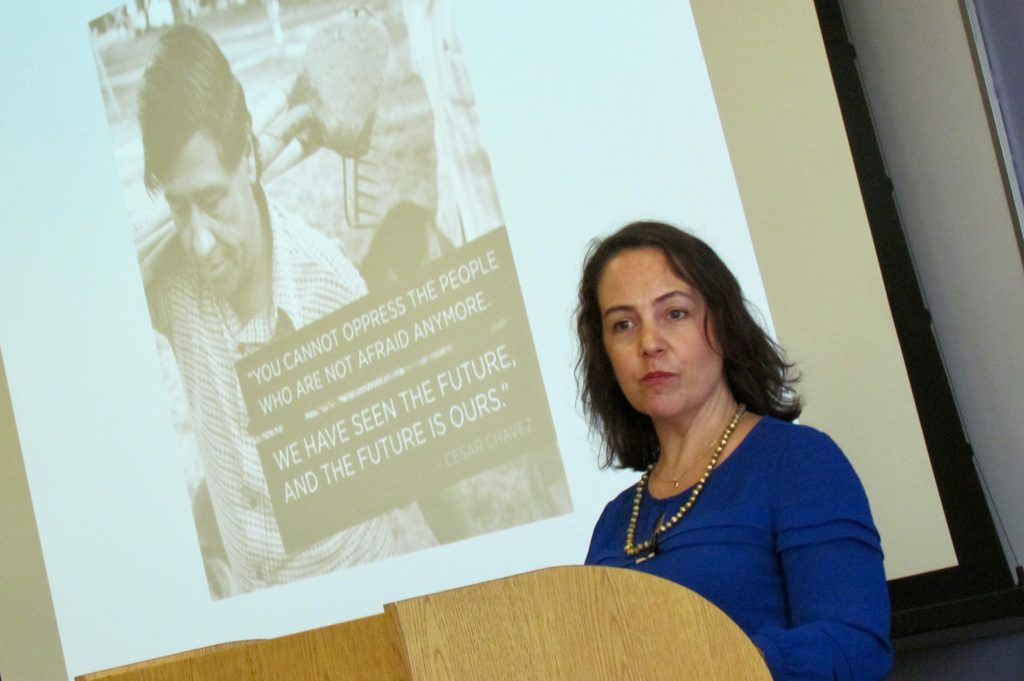 Milwaukee nonprofits must strengthen community relationships, act with organizational integrity and diversify donor networks to begin addressing the root causes of issues such as poverty and inequality that plague the city, according to local nonprofit leaders.

Black Health Coalition of Wisconsin Founder and President Patricia McManus said many philanthropic and nonprofit leaders don’t understand the impact of their decisions on people’s lives. “Empowerment is that people empower themselves … You give them the tools — whether it’s the education, whether it’s the resources … and that is not what we have in Milwaukee.”

“I think we need to be really clear about what we’re hearing that residents and our partners want at the neighborhood level,” said Beth Haskovec, executive director of Artists Working in Education (A.W.E.), a local nonprofit whose mission is to provide area youth with access to arts enrichment programs.

The comments by McManus and Haskovec came after a recent nonprofit forum both attended. Erica Kohl-Arenas, a professor, researcher and author of “The Self-Help Myth: How Philanthropy Fails to Alleviate Poverty,” presented on research she conducted that examines three initiatives in California’s Central Valley, dating back to the Cesar Chavez-led farmworker movement of the mid-1960s. The event was hosted by the UWM Helen Bader Institute for Nonprofit Management.

Kohl-Arenas identified what she called “a war of position” between the different interests — including funders, nonprofits and the farmworkers themselves — involved in these movements. She said stakeholders in social change movements engage in “[multiple] layers of decision-making and agenda-setting.” These negotiations necessitate building consensus and often end up compromising the goals of those most affected by structural inequalities. According to Kohl-Arenas, “Institutions made of industrial wealth are not going to continue to support a movement that challenges industrial wealth.”

A private presentation by Kohl-Arenas at Bader Philanthropies, held after the morning forum, included representatives from local foundations. Asked about Kohl-Arenas’s comments, Maria Lopez Vento, vice president of programs and partnerships at Bader, said in an email that the foundation “does not subscribe to or endorse the views of the presenter.” She explained that Bader hosted the event “because we support the Helen Bader Institute and its mission of educating and preparing the next generation of nonprofit leaders.” 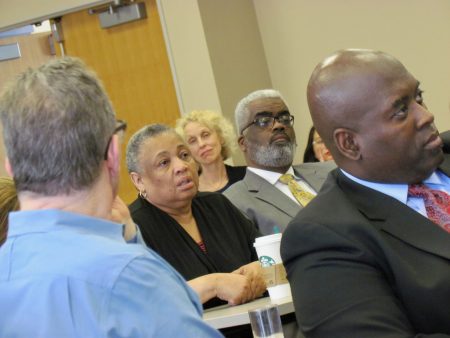 Patricia McManus (seated, left), founder of the Black Health Coalition of Wisconsin, asks a question during the event. Photo by Jabril Faraj.

According to a recent report from the Public Policy Forum (PPF), a local nonpartisan think tank, 2,431 registered nonprofits in the Milwaukee metro area received $1.85 billion in charitable contributions in 2011. Both the number of nonprofits and contributions received have almost doubled since 1989. A PPF survey from 2016 showed that overall nonprofit leaders in the area saw the sector’s outlook improving, though that perspective was not shared by smaller organizations and nonprofits that focus on workforce, economic or community development.

During that same period, Milwaukee’s poverty rate has increased, from 21.9 percent in 2000 to 29 percent in 2014, according to the U.S. Census. Poverty and other issues, such as incarceration, disproportionately affect the city’s African-American population. Milwaukee has seen spikes in violence over the last two years, which elected officials and community leaders have attributed to a failure to address the root causes of “staggering poverty” such as access to jobs and quality health care.

“Usually, what ends up happening is that space in the middle leaves out the harder structural changes and root causes that the more powerful players in this war of position don’t want to address,” Kohl-Arenas said, adding, “real wisdom comes when people engage in discussions, and analysis and research about their own lives, and build community-based strategies for change in partnership with stakeholders and organizations.”

For this to happen, relationships are key, according to Patrick Schrank, director of programs at Milwaukee Christian Center, who also attended the presentation. He said it is important for nonprofits to build relationships with foundation program officers who can help nonprofits further their mission, but that it’s also necessary to “center” the conversation on — and include the voices of — those being served.

“It’s really challenging to keep the infrastructure in place [and] keep the funding in place to do the work. And, that can, sometimes … dominate the conversation,” said Schrank.

Kohl-Arenas said, particularly since the presidential election, many foundations have begun to give money to initiatives — such as immigrant rights and the creation of organizing frameworks — that would have been taboo when she began her work. However, she said it’s important to understand their limits.

“Foundations will do some things,” she said. “I think there are other things they will never do, and we need to look elsewhere to do that work.”

McManus and Haskovec agreed, saying that nonprofits need to start building individual donor networks and looking elsewhere for funding so their ability to advocate for those they serve will not be restricted. McManus said she’s pleased to see new initiatives — such as Solidaire, a community of young wealthy donors — emerging that provide funds with fewer strings attached. Haskovec also said her organization is exploring other alternatives, such as merchandising photographs and art prints, but added that any forays into this arena must further the organization’s mission.

More importantly, Haskovec stressed the importance of organizations approaching their work “through a social justice lens,” being aware of how actions affect people and intentional in how they interact with the communities they serve.

“We are working very intentionally to build systems where we are hiring artists that live in the neighborhoods that we’re working in,” she said of A.W.E.

Others are building community-based solutions from the ground up. Andre Lee Ellis, founder of We Got This, said his organization does some grant writing but the majority of contributions come directly from community members and volunteers. He said the work he and others have been doing in Borchert Field since 2014 is about building ties between neighbors and creating community wealth.

“I want people to know that you can make your own clothes … you can grow your own food,” said Ellis.