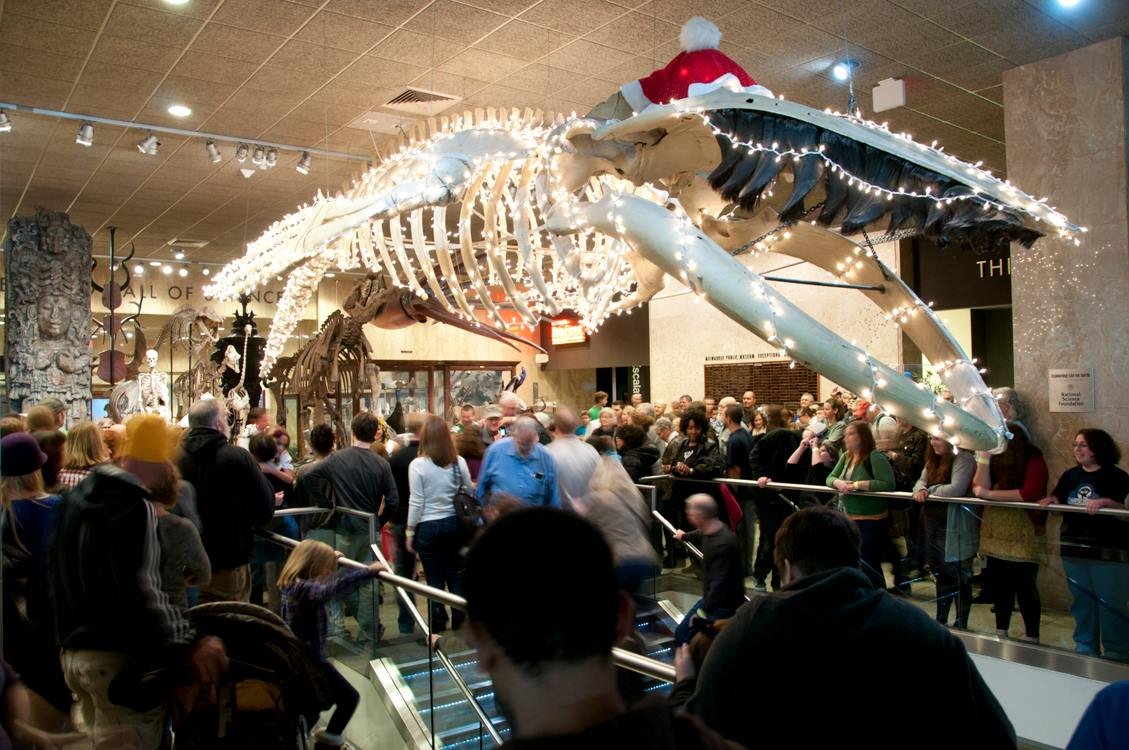 The Christmas Whale in the Milwaukee Public Museum lobby.

Often appearing at Turner Hall Ballroom, Present Music has been most interesting when choosing venues exploiting the connection between music and place. This Saturday for the first time, their program – Time, Nature, Culture, Sound – will be scattered throughout the Milwaukee Public Museum. The Public Museum pioneered the creation of immersive environments — ground breaking installations meant to place the observer within an exotic space. These were the first “Gear VR” views, without the headgear or the smart phone on your face.

What do you program in such a space? It must have been obvious how to begin. George Crumb‘s Vox Balaenae (Voice of the Whale)(1971) leads the program in the auditorium. A number of composers responded to the release of recorded underwater whale sounds in the 60s. Crumb’s chamber work for electric flute, celllo and amplified piano echos, without mimicking, the ethereal qualities of those recordings. The Present Music ensemble will play this and works by David Lang and Nina C. Young.

John Luther Adams, (the “other” John Adams), who wrote Inkusuit, which Present Music performed at the Lynden Sculpture Garden in 2013, began composing with music inspired by bird song. Strange Birds Passing (1983) for flute ensemble will echo in the vanishing ceilings of the Museum’s Wisconsin Woodland.

The Planetarium calls for spectral universal sounds. That environment is well suited to the music of Somei Satoi, an established Japanese composer. His work, The Heavenly Spheres are illuminated by Lights (1979), makes no strict distinction between the sounds of nature and the sounds of music. Satoi’s work will be paired with a premiere performance of A Slower Speed of Light (2017), composed by UW-Milwaukee music students C. Olivia Valenza and Nicholas Elert. The Planetarium sky will be programmed to enhance the music.

Instruments featured in Pacific Island and pre-Columbian exhibits will appear in soundscapes created as patrons walk around and through these exhibition halls. Malia Chow, specialist in Polynesian music, will lead the first setting. Julio Pabon, who performs with De La Buena, will direct the pre-Columbian ensemble. The ancient instruments on display were an early inspiration to Artistic Director Kevin Stalheim as he began envisioning the program. Many instruments will be available for hands-on viewing in the lobby before the concert begins.

Present Music pianist Cory Smythe has composed Ashodeloidea (2017), another premiere, to be ”played” by manipulated electronic sensor signals from a live aloe vera plant. The work’s description suggests that when the plant is stimulated, it may “produce musical results suggesting comfort and calm, or excitement and alarm.” Smythe will be playing other works in the auditorium as Marcus Rubio explores a relationship with this tropical plant to Smythe’s instructions. Rubio will also perform a work of his own, Sonata for Musical Saw and Electronics (2009). 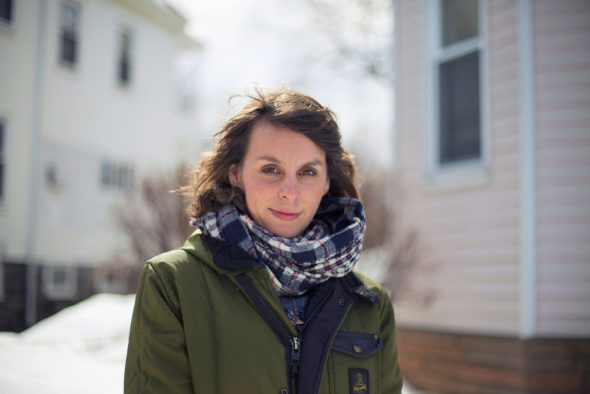 The Dinosaur diorama will feature Ashley Fure‘s Something to Hunt (2014). Fure has been very intentional with her composition, as her description suggests: “Think of a tiger first spotting its prey. The silence of it. The sudden singularity of purpose. …Much of my work revolves around questions of compulsion and drive. What motivates a sound, what pulls it forward? … So what do we search for? What do we hunt?”

Many of the other selections are motivated by narrative as well. The program notes will help explain that. But in this setting, the environments allow the music to speak for itself. PM Associate Director Meaghan Heinrich recognized the power of these settings, of “using the Museum exhibits to set to context for music,” as she notes. The immersive environments of a Wisconsin woodland, rain forest, pre-Columbian tomb or night sky enhance both the visual and aural experience.

Overall, this evening will be the most complex Present Music has offered. Just over 50 performers will be involved in the evening, when counting all those scattered throughout the exhibitions. The audience will be divided into four groups who will cycle through the exhibits.

Present Music and Milwaukee Public Museum staff are both enthusiastic about the synergy created by this event. They have already signaled their interest in working together again.

The concert begins in the lobby the of the Milwaukee Public Museum, 800 W. Wells St., at 7:00 p.m., Saturday, April 29. Music will be offered as the audience gathers in the first floor of the museum. To end the evening, the group CNJ will perform Latin Jazz. Tickets may be purchased online or at the box office (414-271-0711 – M-F, 10 a.m. to 2 p.m.) General admission tickets are $25, students half-price. A VIP fundraiser event with food, entertainment and celebration begins at 5:00 p.m.