Four plans to fix terminus at 46th and Lisbon presented. 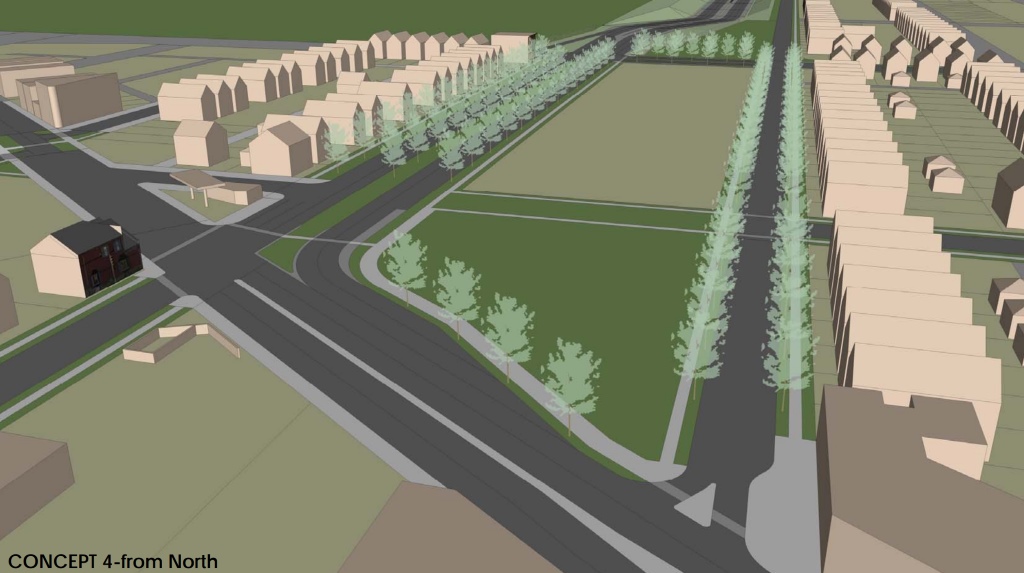 WIS 175 Concept 4 from the North. Rendering from the City of Milwaukee.

City officials revealed their preferred plans Tuesday for fixing a treacherous intersection that connects the remnant of a mid-20th century freeway into the city’s grid of streets.

The freeway is Wisconsin Hwy 175, which abruptly ends at Lisbon Avenue near Washington Park, between 47th and 46th street. Originally, the freeway was planned to extend further north and chew through more neighborhoods, but local residents fought hard to stop it after watching freeway projects level city blocks and sever the Washington Park and Washington Heights neighborhoods.

“This really comes together at a very critical juncture in the city,” said Rocky Marcoux, commissioner of the Department of City Development (DCD), at a public hearing yesterday.

The two concepts favored by the DCD Planning Division are among four that were originally proposed to residents and local stakeholders in Dec. 2016.

The plan the city prefers, called Concept One, would move the southbound on-ramp next to the northbound off-ramp, creating a traditional right angle intersection at Lisbon Avenue and a plot of land west of the freeway that can be used as community space.

The other favored plan, called Concept Four, is more expensive, but a better plan for addressing the concerns of the residents and for potentially getting rid of the freeway in the long term. It would remove the freeway entirely between Lisbon and W. Lloyd Street, and construct a boulevard in its place. The ramps would be constructed next to each other south of W. Lloyd Street, where the freeway would begin and end. Also, N. 46th Street would become a two-way boulevard. This plan would also create a public plot of land, which would be bigger than the one created by Concept One.

Residents who attended the meeting expressed concern about safety above all in regards to the new redesign, for pedestrians and bicyclists and drivers that live and travel through the area.

Officials and the majority of residents that participated in the survey favor Concept Four, which is the most expensive plan. 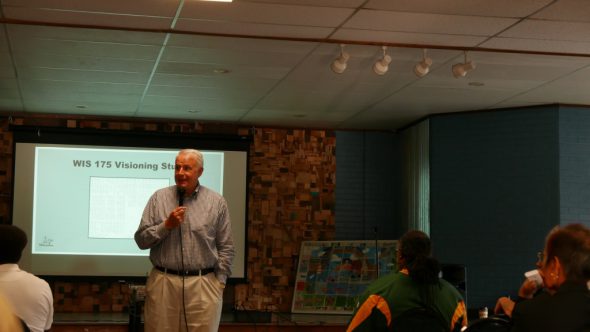 The project involves tearing down and rebuilding state-owned freeway land, and therefore will have to make it’s way into the state transportation budget. That’s where Rep. Evan Goyke (D-Milwaukee) comes in. He’s agreed to take a final plan to Madison and work to get it into the queue.

“The majority in the legislature, as well as the governor don’t seem to be able to see eye-to-eye on how you actually pay for these projects,” Barrett said. “They’re really, really good at promising people they’re going to do the projects, but then when it comes time to pay for them they forget that part of the equation.”

Many at the meeting said they would rather see the whole WIS 175 taken down, or taken down at least as far south as State Street or Vliet Street, as one resident proposed.

“The state would never go for that,” Marcoux said. “They control the dollars and they control the land.” He said accomplishing a smaller project first would help to shore up public support for a larger WIS 175 project.

Monica Wauck, from the DCD planning division, said the proposals before the residents are a way to “chew off a bite size” for now, so that the larger freeway can be tackled later. Kyle Gast, also with DCD said, “I think option four really is that first step to getting that started if that’s the path that we go.” 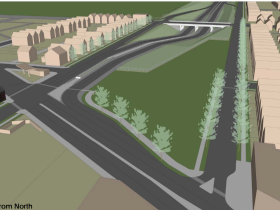 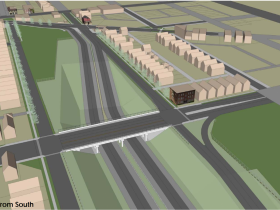 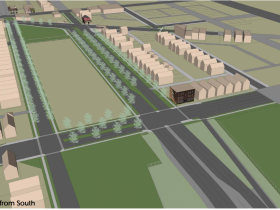 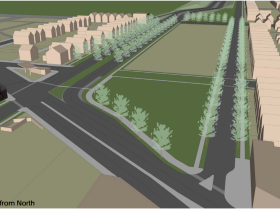 The city bought a piece of property that sits at the end of Highway 175  between the two freeway ramps at a cost of $270,000, and had help from the area business improvement district, BID 16, which chipped in $25,000 for the purchase. This patch of land has been troublesome in the past, with  several iterations that didn’t last. Its last use was as a bank, but it was frequently robbed due to its immediate proximity to the freeway.

Before the city purchased it, there was a buyer interested in putting a large storage facility in the spot. Ald. Russell Stamper worked to find money in the city’s capital funds to buy the land, or else there would have been no way to forestall the storage facility, Stamper said. Development of the land also would have thrown a wrench in any plan to fix the intersection.

The city could create a community space, install public art or do some type of landscaping treatment. Residents that took a survey were most receptive to a community space such as a garden or a little plaza, but the majority also said they would like to see a combination of all three.