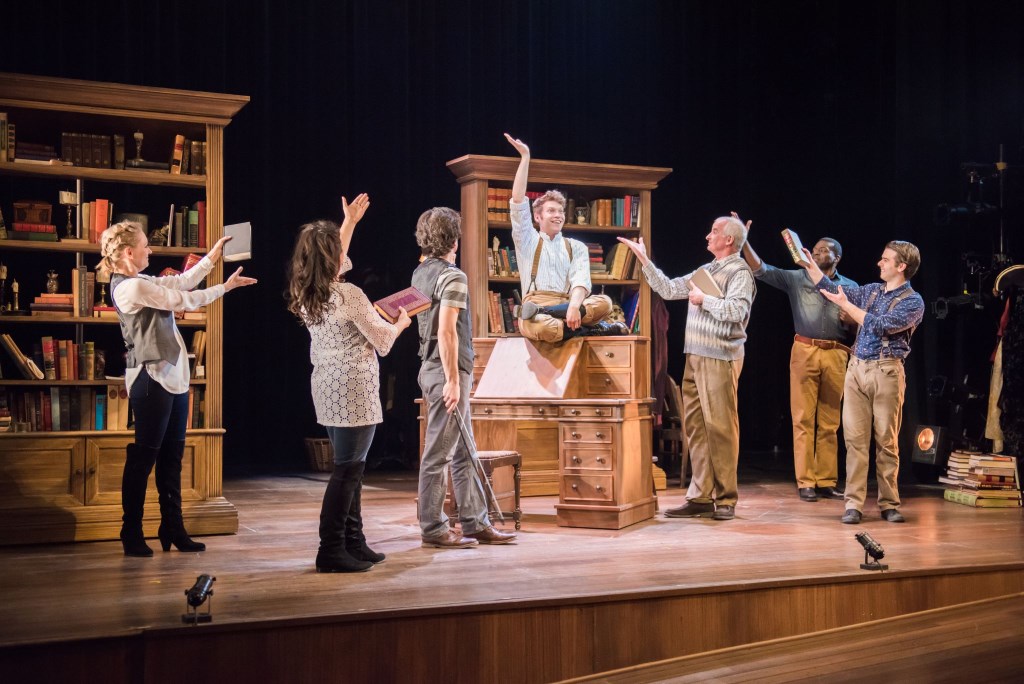 If your expectations are not limited to what Charles Dickens did with words on paper, but open to what theater can create out of ensemble inventiveness, you’ll find both forms of imagination – novel and theatrics – are engagingly knit in the Milwaukee Chamber Theatre’s Great Expectations, through April 30 on the Cabot stage of the Broadway Theater Center.

Even David Lean’s famous 1946 movie version dared not attempt the entire complicated intrigues in the novel involving Pip, the naïve rustic boy and blacksmith apprentice who rises to great social heights, self-deception and anguish in Victorian England. But this production fills the gaps in clever nonstop ways.

While film requires intense scenic locations and dozens of actors, director Molly Rhode needs only seven performers, visible stage lights and a few pieces of furniture (though we are also being fooled by scenic designer Lisa Schlenker, since the set piece is more complicated than that).

In this crammed library with freshly painted Victorian bookshelves and a desk reminiscent of Dickens’ own, the mountains of books become an orchestral percussion section and a wheeling world of candle-lit mansion and London byways. Madelyn Yee’s props interact with Jason Orlenko’s costume pieces in a dervish of activity. The actors are props as well – also living furniture, noise makers and page rustlers. This precise execution and punctuation do more than help the lone musician (and full member of the ensemble) Andrew Crowe, whose violin plucks, “olde” English airs and mournful bowing react to the tale even as he acts in it.

Playwright/adapter Gale Childs Daly has ripped up the novel and reassembled it with mathematical expertise and Dickensian interpolations. It’s like a fascinating literate solution to the Rubik’s Cube. The cast constantly changes hats and purpose while retaining identifiable characters when needed.

Daly, like her husband Jonathan Gillard Daly, who is a key part of this ensemble, is a theater pro who delights in what versatile actors can do with physical movement and vocal skill. This is a clever theater piece that serves up the best Dickens, but relies on theater skills more. It doesn’t intend to break new ground on how to do Dickens, since many of his novels (Nicholas Nickleby, A Christmas Carol) have been subjected to similar treatment.

But it is quite an accomplishment. Rhode has set a high bar for coordination and it’s clear that somewhere in the process all the actors became eager to leap over it. It would not have worked with lesser skills. There is not a weak link, though we have to first single out some remarkably strong ones. 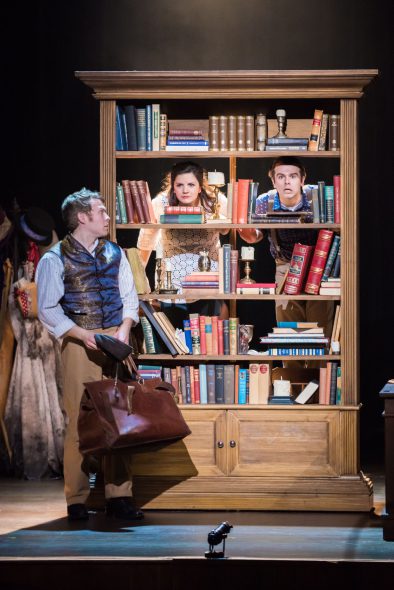 It starts with Pip, also a narrator in this version. Yet Josh Krause convinces us he’s Pip at age 7, frightened on the moor by convict Magwitch, and then a growing lovesick swain coping with that cruel melancholy wreck in wedding weeds, Miss Havisham, and her fickle aloof ward Estella.

It may be harder to move into the love-torn adult Pip, but Krause keeps innocence and noble conviction alive through all the changes in age and the torrents  of exposition. He has a bright open appeal in a role that demands both warp speed and quiet listening.

Deborah Staples demonstrates again why she is one of the Midwest’s most sought vocal talents as well as a stage chameleon. She changes body, voice and manner with the flick of a bonnet, a scarf or a wedding veil and stays intent within the action even when she’s not center stage.

Chiké Johnson brings formidable voice and characters ranging from the friendly blacksmith to the haughty suitor to the cunning street agent—a lead example of the versatility required of the whole company.

A tall stage veteran of decades of attention, Jonathan Gillard Daly is having a lanky lark embodying every purpose and quick change his playwright wife can throw out there. It’s not just that’s he’s scary as convict Magwitch and other Dickensian types, he is uproarious as a Pocket family baby.

Karen Estrada relies on a liquid voice to move from saintly Biddy to deadly Estella — and shady characters in between. It’s not just her voice but her body being hurled around the stage. Zach Thomas Woods is openly  delighted with the opportunity for comic prancing, but also serves as an ideal vocal and ensemble foil in the dramatic moments. The entire company takes giddy joy in parody of Hamlet, one of the production’s side excursions to keep the staging unexpected.

This nimbleness of quick sketch artistry and adroit interplay keeps the audience leaning forward throughout the longer first act. The methods become a bit repetitious in the shorter last act but we hang in there because the company has made us eager to see if all the tangled threads of the story come together. They do. 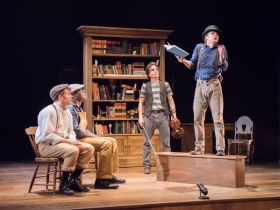 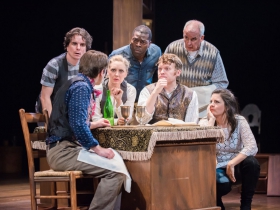 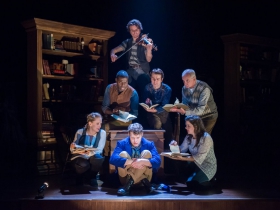 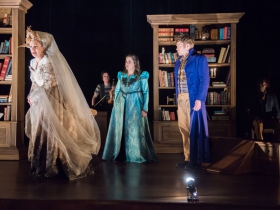 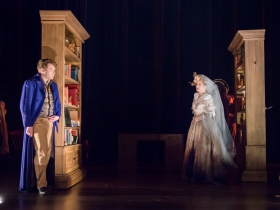 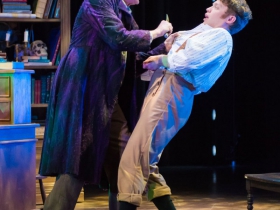