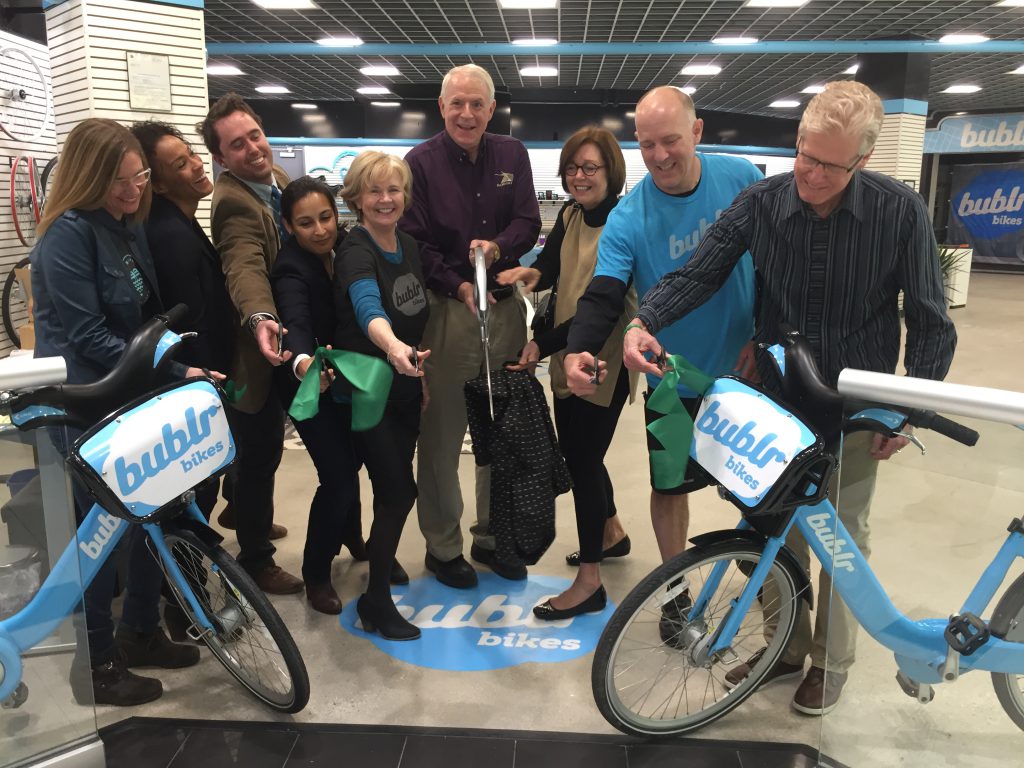 The rebirth of the Grand Avenue Mall is underway. Bublr Bikes, Milwaukee’s non-profit bike sharing provider, christened their new headquarters Friday morning in the first floor of the mall. Milwaukee Mayor Tom Barrett and Wauwatosa Mayor Kathy Ehley were on-hand to cut a ceremonial ribbon and welcome visitors into the space.

Since the mall’s opening in 1982, Bublr’s space has been used by a number of retailers including Gap, Sam Goody and most recently a jewelry store. Bublr has converted the two-room space into an open-concept, modern office with a workshop in the rear. The organization does bicycle assembly and repair in the space, parts for which can be seen lining the walls. Approximately 20 Bublr employees work in the space.

Open house guests were able to see the new offices and were treated to food and drink including bicycle-themed cookies. A curated playlist of bicycle-themed songs played over the office’s stereo system.

Bublr currently has 57 stations and 512 bikes. According to Bublr executive director Sally Sheperdson the system plans to expand into Shorewood and West Allis this year, as well as add stations in Milwaukee. The communities each received a federal grant in 2014 to support expansion of the system. Bublr has a goal of reaching 100 stations and 800 bicycles.

Wauwatosa Mayor Kathy Ehley was effusive in her praise of Bublr. The mayor noted she keeps a bike helmet in her office and has used the system to get to a number of meetings, including at a nearby Colectivo cafe. Bublr expanded into the inner-ring suburb last year using a combination of different federal and state grants.

In a nod to regional collaboration, Ehley said “the more we partner with the city of Milwaukee the stronger our region will be.” Cooperation between the two municipalities will be essential to developing the proposed East-West bus-rapid transit system. Bublr bicycles would provide a substantial number of last-mile connections for those not headed somewhere immediately adjacent to a stop.

Bublr board member Juli Kaufmann represented the board during the press conference and noted that the downtown mall is a great fit for Bublr. “It’s a place where diverse Milwaukee comes together.” Board members Barry Mainwood, Jeff Polenske, Radhika Maheshwari and Tonieh Welland were also on hand.

Mall general manager Courtney Morris was there to welcome Bublr to the space. In 2016, new mall owners The Aggero Group and Hempel Companies unveiled a new vision for the mall as a mixed-use space with offices above and a substantial local food component on the first floor. Bublr is the first permanent tenant in that vision. A 10,000 square-foot dialysis clinic was also recently announced. 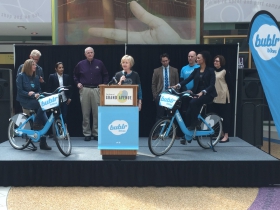 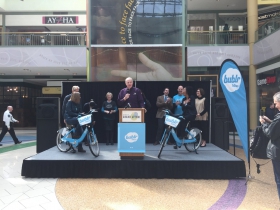 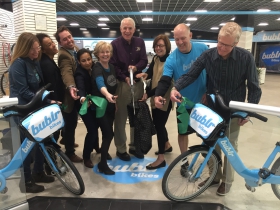 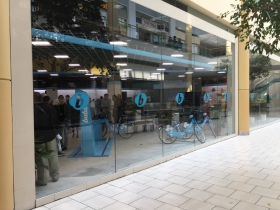 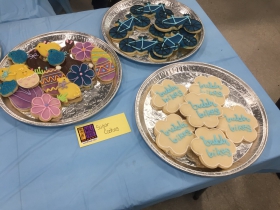 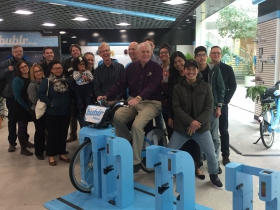