New poll also finds 75% of state residents are happy with their local schools.

By Tamarine Cornelius, Wisconsin Budget Project - Mar 25th, 2017 02:07 pm
Get a daily rundown of the top stories on Urban Milwaukee

An overwhelming majority of Wisconsin residents think schools are doing a good job and favor increasing state support to K-12 schools in the next budget, a new poll by Marquette University shows.

Eighty percent of poll respondents said they want the state to dedicate additional resources to schools in the next budget, with just 17% opposing such a measure. That represents a strikingly large majority of Wisconsin residents who want to see legislators make K-12 schools a priority as the budget moves forward. 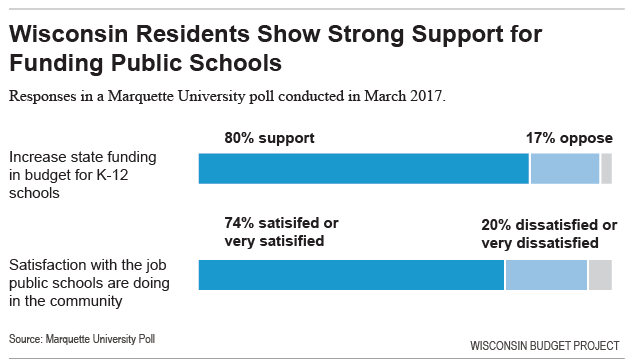 Governor Scott Walker has taken an initial step in increasing resources for schools in the next budget, by proposing an increase of $649 million in state support over the next two years.  (Read our summary of Governor Walker’s proposed budget for K-12 education.)  But some legislators have said they are leaning against providing K-12 schools with a sizeable boost in state support along the lines of what Governor Walker has recommended. In particular, State Senate Majority Leader Scott Fitzgerald has balked at the Governor’s proposal, according to news reports – although Fitzgerald has said he favors some, smaller, increase in school spending.

Wisconsin residents also display a great deal of satisfaction with the job that public schools are doing in their communities, according to the poll. Nearly three-quarters of respondents (74%) said they were “satisfied” or “very satisfied” with the job that public schools were doing in their communities, compared to just 20% who said they were “dissatisfied” or “very dissatisfied.”

Even though a strong majority of Wisconsin residents think public schools are doing a good job, some lawmakers have pushed changes to the state’s education system that make it harder for public schools to give students the excellent education they deserve. This in-depth Milwaukee Journal Sentinel article explores how the expansion of the school voucher program forces public schools to make budget cuts or raise property taxes to pay for publicly-funded tuition subsidies at private schools:

Now that private schools outside of densely populated Milwaukee and Racine can tap into voucher funding, new tensions are bubbling up between religious conservatives eager to offer more students a religious-based education and district advocates who fear losing resources to private schools now competing for the same pot of public dollars.

“There’s only so much money,” said [Sue] Kaphingst, the Chilton superintendent. “You’re taking from one for the other.”

Wisconsin residents understand the value that public schools bring to families and communities. State legislators should heed their constituents, and make sure public schools get the resources they need to help educate Wisconsin’s future workers.