Loneliness Of The Long-Distance Pilot 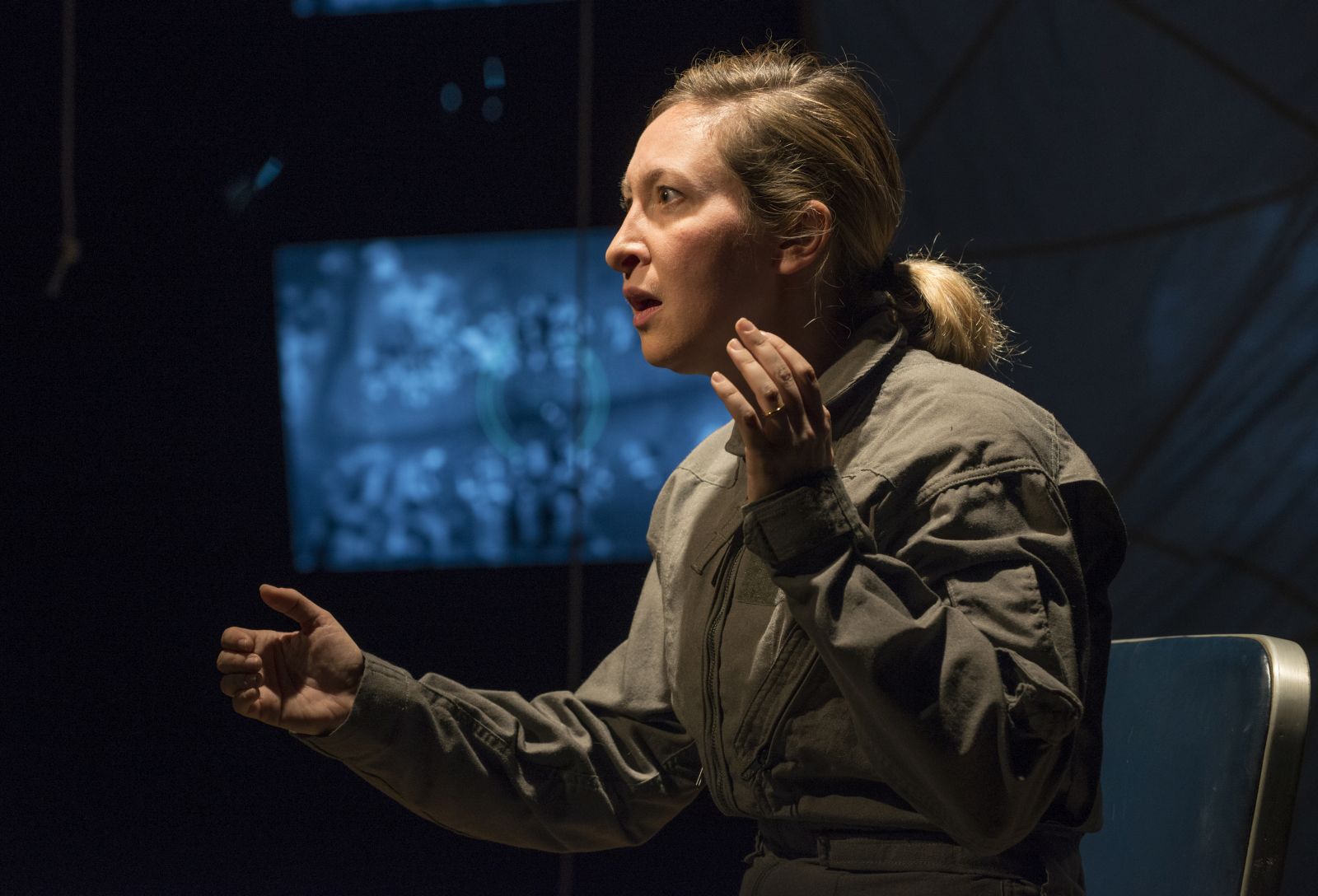 On first reflex, “Grounded” seems a study of the disintegration of the modern American warrior. But it is just as much about the inescapable remote eyes of cameras and screens prying on all of us in society.

The hook is that The Pilot starts out as a confident woman alone on stage, relishing her invincibility when raining down destruction from the sky and then going out drinking with the boys. She falls in love, gets pregnant and grounded, and then moved to the drone video screen to continue her piloting duties.

If all that sounds grim and too serious, Grounded, through April 2 is actually punctuated with laughs and recognizable human situations — a mesmerizing but intimate experience that renews the theatergoer’s faith in the creativity of the human narrative.

It also fits a pattern. Some of the best work at the Milwaukee Rep occurs on its experimental Stiemke stage. The play selection and designers seem freer to cut loose with fresh vision, adjusting the presentation to the play. As has been customary of late, the set-up is more traditionally “eyes front” but the Stiemke can be converted into a three-sided  arena.

George Brant’s 90 minute one-person play – though the video and sound world created by Hillary Leben and Megan B. Henninger is almost a second character – was notably done in 2015 at New York’s Public Theater after a production in Scotland in 2013. It remains unsettling, partly because drone warfare continues to weigh on our psyches.

The Pilot goes from happy sky warrior to fairly contented wife and mother and then into physically safe tracker, killing enemies in the Middle East from a base trailer near Las Vegas where only the flickering gray screen has hypnotic life.

Brant’s plays have been most admired in American regional theater and his subjects are hard to pigeonhole. He is topical and penetrating. The words are a rich playground – and minefield — for the actor. Some recognizable theatrical devices – the early planting of colors, idioms and phrases that come back to open our eyes – have to be handled delicately to keep the messages feeling like natural dialogue, even though Brant has a secure knowledge of playwriting.

New to the Rep, she provides an immediacy of character that surprises the audience into attention. She has an ability at throwaway humor without neglecting the mental connections the dialogue needs. This portrait seems simple, but it has many layers — not just a pilot enamored of a butch swagger and locker-room language (which there is in abundance), but the self-possessed supposedly unflappable tomboy next door, displaying a candor about sex, marriage and motherhood that will soon be mixed with hallucinations.

Fisher goes unflinchingly at the language, the bloodlust in every warrior, the price when enforced isolation runs headlong into haunted conscience. But she also is unflinching at dealing with the audience — conveying   amusement, normalcy and then crescendos of pain and anger.

This is, thankfully, not some tale of a woman’s place in the air force or an antiwar screed. It is an artistic meditation on how video warfare and its godlike sense of security and omnipotence can turn experienced combat veterans like The Pilot both more normal and abnormal. It’s something military minds have only too slowly become aware of. Being close to the war zone action creates one kind of trauma. Remote interminable watching, waiting, imagining and striking is quite another.

This is rich field for Brant that director Laura Braza has been careful to balance excellently with trust in the solo actor.

It may seem surprising to call this a low-tech production since designer Scott Davis places at center stage ballooning parachute silk that doubles as a movie screen while planting a revealing mirror wall on one side and video screens on the other, all interlocked with swooping and silently exploding air force action.

But as busy as that sounds, and despite the hefty coordination that Braza and the tech staff accomplish, the production has not succumbed to the imbalance so prevalent with modern pyrotechnics. The play is grounded by its focus on The Pilot’s humanity. 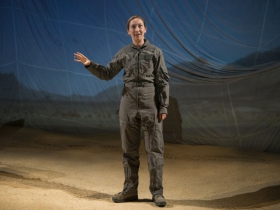 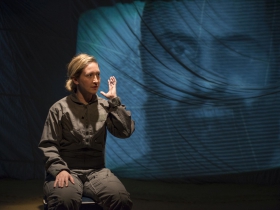 One thought on “Theater: Loneliness Of The Long-Distance Pilot”