Banks Out; Starbucks In at Groceries Is the era of branch banks in grocery stores over? TCF Bank closed offices in five Milwaukee-area Pick ‘N Save and two area Piggly Wiggly stores between February 13th and February 17th.

According to Amie Hoffner, VP and Director, Corporate Communications of the Wayzata, Minnesota headquartered bank, “All closing branches have other TCF Bank branches 1-4 miles away. Now that the seven branches [are] closed, TCF Bank has 21 ATMs and 16 branch locations in Wisconsin from Milwaukee to Racine to Kenosha and hundreds more branches extending into Chicago.”

The closing comes at a time when Cincinnati-based Kroger Co. plans to renovate its Pick ‘N Save and Metro Market stores in the region, which should bring more change to local groceries.

Kroger Co. will spend $50 million in 2017  while “starting to remodel stores in Milwaukee” that it bought in its late 2015 acquisition of Roundy’s, CEO Rodney McMullen told the Journal Sentinel in December.

However, the company has been tight lipped about what it has in mind for the Milwaukee remodels, which follow those done in 2016 in Madison and the Fox Valley.

Urban Milwaukee reached out to Roundy’s and other involved parties after hearing detailed reports of the planned changes from employees and customers.

“We are in the early stages of the planning process for the remodel of our Metro Market Van Buren store. There is nothing I can comment on publicly at this point,” says James J. Hyland, VP Corporate Communications and Public Affairs, Roundy’s Supermarkets, Inc., in response to our inquiry.

Yet it appears the firm’s plans are far in advance of what Hyland suggests. Some employees at the Metro Market, 1123 N. Van Buren St., say they have been shown plans indicating significant changes in the store and its layout.

They include a Starbucks cafe (with bar) in the location now occupied by the liquor department. At the Pick ‘N Save at 1100 E. Garfield Ave., the TCF Bank that had operated in the grocery for 18 years closed February 13th, “to be replaced by a Starbucks,” one employee told a customer. The store and bank opened at that location in 1998.

Starbucks did not respond to a request for comment from Urban Milwaukee.

The Metro Market concept was pioneered by Roundy’s at the Van Buren location in 2004, and has since spread to other locations as it has been refined. The brand was designed to counter inroads in the upscale grocery market made by local companies like Sendik’s, and to accommodate the trend for to-go and prepared foods for its younger, urban clientele.

The chain attempted to draw customers with gimmicks like date nights, and self-serve by-the-glass wines. These have long since been discontinued.

Most recently Metro Market opened a store in Shorewood, which is equipped with a Starbucks cafe inside. There are dozens, if not hundreds of Starbucks outlets in Kroger stores nationwide.

At the Van Buren Metro Market the Starbucks footprint would displace the existing liquor department, which is currently set off from the rest of the store with a separate entrance.

The liquor department would locate further inside the store. This would force changes in the store layout, and displace about two aisles of groceries, thereby requiring loaves of bread, slabs of bacon and pints of pickled herring to find new homes.

It is anticipated that the remodelling will also displace Guaranty Bank, which has a branch at the Van Buren store. The bank has not commented on this speculation, but the days of banks in grocery stores seem to have gone the way of date night and pour-it-yourself wine.

There are no open permits at either location that would tend to indicate any large-scale remodelling underway at this time. Nor have the plans surfaced at the City Development Center. Urban Milwaukee will continue to track developments as they occur. 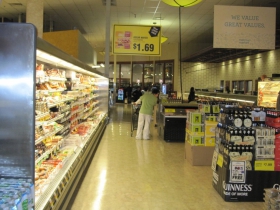 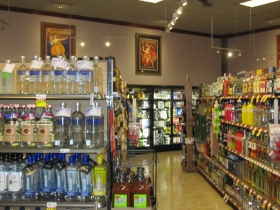