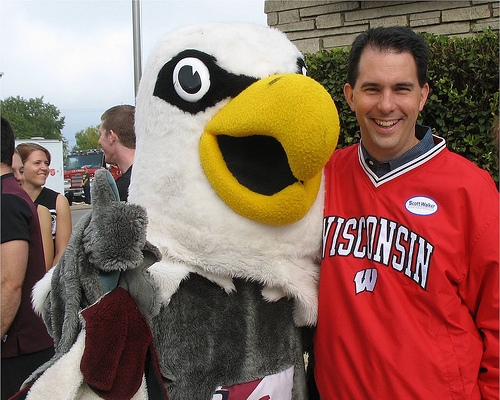 The system is broken and isn’t treating borrowers fairly. Consider, for example, that you cannot refinance a federal student loan with the federal government that provided you with that loan.

We need reform, and we need our elected leaders to step up and lead. But for the Wisconsinites who worked hard to get their higher education and took on the personal responsibility to pay for it, their governor is dodging the issue. Instead of offering solutions, he told them in his 2017 state of the state speech that they should call a bank.

With this statement Gov. Walker is either being incredibly naive or purposely disingenuous on the student loan debt crisis. If banks could have solved a problem that would have gotten them 43 million customers, don’t you think they already would have?

The simple fact is you ought to be able to refinance your student loan, just like you can with a mortgage or a car loan. And the state and federal government can, and should, help make that happen.

And Gov. Walker ought to take responsibility for helping fix a student loan debt crisis his policies have contributed to worsening. On his watch, Wisconsin ranks among the top five states in the nation for percentage of college graduates with student loan debt, with 70 percent of the class of 2015 graduating with nearly $30,000 in debt along with their degree.

We got here in part because he and the Republican led legislature have cut funding for higher education by record amounts, underfunded financial aid for eligible students and hiked tuition by double digits. The result is that students are bearing an increasing share of the cost of higher education, and they are borrowing more to get the education they need.

And it is not just young college graduates bearing this burden. Fifteen percent of student debt is held by people over the age of fifty, over 155,000 Americans over the age of 60 had their social security benefits garnished to pay student loan debts.

It is important for borrowers and for our entire state economy that we act. Original research by One Wisconsin Institute found that student loan debt has a significant and negative effect on critical drivers of the economy like new car and home sales, as borrowers are significantly more likely to buy a used versus new car and rent versus own their home. Other research has found student debt diminishes the ability of borrowers to save for retirement or for a child’s education and impedes entrepreneurship.

Student loan borrowers aren’t asking for a bailout. But they should be able to expect a little common sense. For example, in the last two legislative sessions, over 50 Wisconsin Democratic state legislators have sponsored the Higher Ed, Lower Debt Act, a plan to create a state authority to help borrowers refinance their student loans, just like you can with a mortgage. The measure also extends a state tax break to payments on student loans and provides additional consumer information about higher education loans.

Scot Ross is the executive director of One Wisconsin Now, a progressive statewide advocacy organization and a national leader for student loan reform.