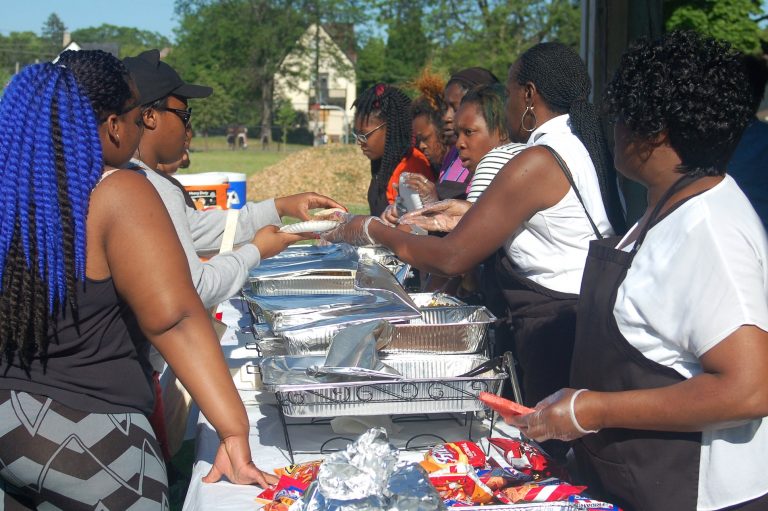 Volunteers serve a free meal during a community event at Moody Park in June.(Photo by Edgar Mendez.

In October 2016, James Brown, 82, a minister and 40-year resident of Amani waited for more than 12 hours to testify against All Star Foods, a corner store less than a block from his home, at a Common Council license hearing. The store, located at 27th and Burleigh streets, allegedly sold tobacco and alcohol to minors, maintained unsanitary conditions and looked the other way when a young girl was trafficked out of the building’s basement.

According to Brown, 12 individuals from the neighborhood showed up at the 9 a.m. hearing to speak against the store’s license renewal; by the time he testified, at about 10 p.m., there was only one other resident left. Ultimately, the license was revoked and the store was closed.

The store was a nuisance, according to Brown, who lives on the 3100 block of N. 26th Street. He said it was important for him to speak out against an establishment that was a negative influence. “I’ve been here 48 years, and I don’t plan on moving,” he said. “Our neighborhood could be just like the neighborhoods in Brown Deer. But, see, people bring down neighborhoods — neighborhoods don’t run themselves down.” 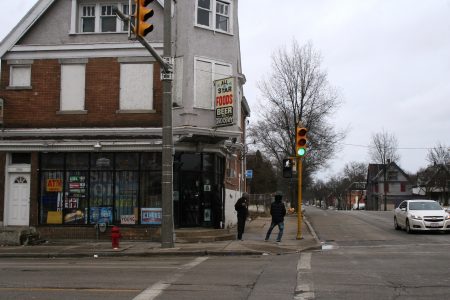 All Star Foods, at the intersection of 27th and Burleigh streets, has been closed since October. Photo by Jabril Faraj.

The opposite can be true, as well, according to Amani residents, neighborhood agencies and law enforcement officials, who have pointed to effective resident engagement and empowerment as the reason for the declining number of reported crimes in the area. Since 2005, reported Class A offenses — which include assaults, breaking and entering, vehicle thefts and homicides — in the four census tracts that make up Amani have dropped by more than 32 percent, compared to a decrease of almost 23 percent citywide over that same period.

“We’ve been able to create an interest that allows for people to want to know how they can help,” said Dennis Walton, the former Building Neighborhood Capacity Program (BNCP) site captain in Amani and a longtime resident. “I think [it’s] really important that a community has to be inspired to help itself, as well as bring outside resources in to be a part of that change.”

Since 2012, crime in Amani has decreased at an even greater rate compared to the rest of the city. Between January 2012 and December 2016, reports of criminal damage to property, theft, robbery and burglary all decreased more than 30 percent. Assaults and arsons have also decreased significantly.

COA Youth & Family Centers Executive Director Tom Schneider, whose Goldin Center is in Amani, attributed some of those gains to the ability of residents to help build neighborhood assets. He mentioned the new Moody Park, a family clinic — the result of a COA partnership with Children’s Hospital — and an early childhood education center as examples of residents’ ability to advocate for resources that have helped improve their quality of life.

Milwaukee Police Department Sgt. Timothy Gauerke said the data suggest that the community and police are effectively working together. According to Gauerke, confidence in the police and a growing sense of social cohesion can lead residents to intervene in many situations before a crime happens.

“When the police and the community aren’t working together, crime often is higher. When crime’s higher, you feel less comfortable in your neighborhood, you lock yourself in your house and you don’t take back your public spaces,” he said.

Part of this change, according to Barbara Smith, president of Amani United, a neighborhood association created as a result of the BNCP grant, is the trust that residents and police have been able to build because of listening sessions organized by the Zeidler Center for Public Discussion.

Collaboration has been key across the board, from the ability of organizations such as COA and the Dominican Center for Women to secure grant funding for neighborhood initiatives to working with police to close All Star Foods. Walton, who has served as a liaison between community members and neighborhood agencies, said continuing to build relationships is essential to Amani’s ongoing success. He added that he believes those working in the neighborhood need to continue to ask, “What is the personality of a healthy community?”

Amani — which is in the 53206 ZIP code, an area where more than 47 percent of residents live in poverty and household incomes are startlingly low — still has its share of challenges, but those working to improve the neighborhood say those efforts need to continue to center around residents.

Walton and Smith said investments in affordable housing and jobs would help community members. And, Brown encouraged fellow residents to get more involved in shaping city policy to ensure those investments are made.

“The residents are the power, they are the resource,” Walton said. “They have the skills; they have the knowledge; they have the ability. And, the elected leadership has to be in alignment with that wealth that lies within communities.”