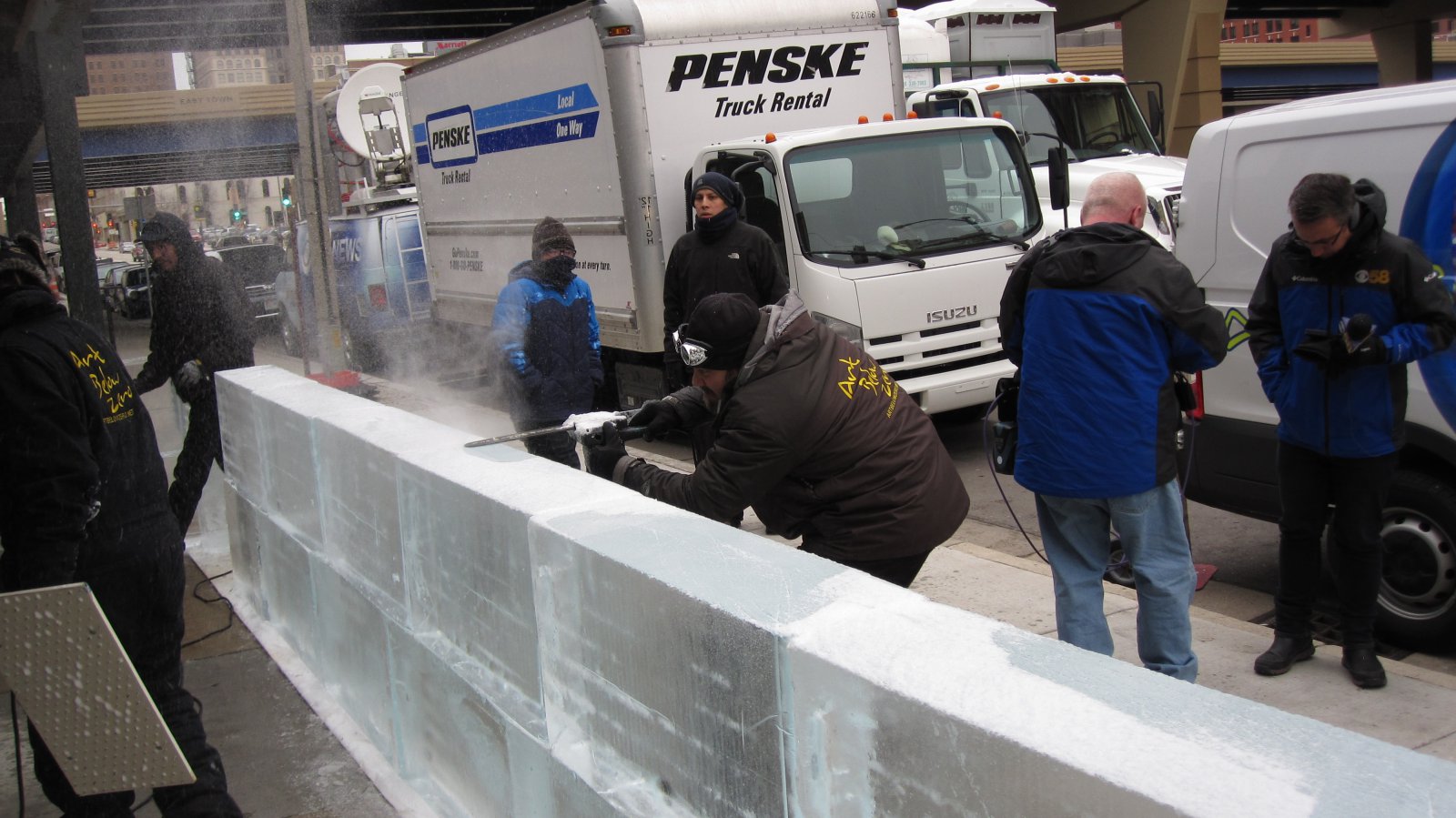 Last fall, in one of his balmier fancies, Patrick Nedobeck of the St. Paul Fish Company decided he would somehow contrive a way to open his beloved outdoor tiki bar in the winter.

The little slab of concrete on the east side of the Milwaukee Public Market is Nedobeck’s domain in the summertime. (See Urban Milwaukee Bar Exam: Fish Market’s Outdoor Bar). The outdoor service helps relieve the strain on the busy seafood store and restaurant opened in 2005 by his sister Beth Collins and her husband Tim Collins. Business has doubled at the public market since 2010; it is among the top 10 tourist attractions in Milwaukee, drawing 1.5 million customers in 2016.  The fish company is one of its larger operations.

“The intersection of Broadway and St Paul Avenue is arguably the busiest in the Third Ward, with a swarm of pedestrian traffic, especially during the warm weather months,” Collins said. But how to energize it during the coldest weeks of the winter?

Nedobeck had an answer: Build a wall of ice surrounding the stainless steel outdoor bar, outfit it with space heaters, light it up at night, and invite the public to have a frosty one. Or a hot one. Just get them outside.

“Wisconsinites tend to be more resilient to the cold than people realize,” Collins reasoned, and the duo set about to make their dream come true.

“At first, we were going to build it ourselves,” Collins said, “but then we came to our senses,” and hired Art Below Zero, a Franksville company that specializes in ice construction. After all, a company that carved an ice carousel for a winter carnival in Quebec could probably handle a simple wall in Milwaukee’s Historic Third Ward.

Collins would limit his handling of slippery things to fish, and let the pros deal with the ice.

It was arranged that the bar would be ready for action on Gallery Night, Friday, January 20th when the area would be busier than usual, and the average high would be 29 degrees — good ice weather.

But Mother Nature had other ideas, as Nedobeck could see as he studied the 10-day weather predictions, so he decided to postpone the work a week. Good thing, since on Saturday, January 21st, the thermometer soared to 56 degrees, tying a record for the high temperature on that day.

On Friday, January 27th, the chill was back in the air, which only served to intensify the fire in Nedobeck’s belly. “We’re going to have good weather for the whole week or more!” he said, meaning, of course, what non-resilient people would call lousy weather.

The ice had arrived on pallets the evening before and was stored in a non-refrigerated truck. By Friday noon, the crew from Art Below Zero had already laid the bottom three courses of ice, creating the foundation for their fantasy.

Each block weighs 300 pounds, and is fitted carefully. A worker uses a chain saw to create straight joints for the walls of ice. The tops of the blocks are scraped with a big cheese grater, leaving a snowy coating in place to serve as mortar for the next course of blocks. Other gear includes drills, saws, chisels and ice picks, that old kitchen standby from the pre-refrigerator days. Some of the project’s decorative elements will be created using the services of state-of-the-art computer numeric control machines of the sort used to fabricate custom fittings for NASA in the Space Age days. Yes, this work is as well coordinated as a rocket launch.

“That’s 3,600 pounds of ice here already,” said Jeanne Zuleta, who owns Art Below Zero with her husband Max Zuleta. Both are internationally recognized in their field. Max, a native of Venezuela who is ranked one of the top in the ice-sculpting world, has been carving ice since 1987.

Jeanne was surveying the work under way as her team moved the unwieldy blocks with balletic precision. Max Zuleta fired up the chainsaw for a fitting, spraying the air with a fine, frosty mist that settled on the tongue and in the eyes far better than would sawdust. They had made it up to three courses by noon.

“That ice is more pure than Evian,” said Jeanne Zuleta, referring to the frozen bounty that was extracted in its liquid state from the well outside the company’s Racine County headquarters in Franksville, right in the middle of cabbage country. Franksville is the home of Kraut Music Fest, which has a tagline of “Live Music and Massive Amounts of Sauerkraut.”

The well water is then treated by reverse osmosis before being poured into metal forms to be frozen into blocks measuring 40″ x 20″ x 10″, which, by the way, is the ice-carving standard. The resulting product is virtually defect-free and glistening. If only diamonds were as pure (and large). A simple 300-lb. block retails for about $70 in the open market. Or, you could make your own out of Evian for about $300 for the raw materials alone.

As the wall continued to build, the action was captured on a stop-action camera for future reference. (It should be up and broadcasting on the Art Below Zero site by Tuesday.) Television news cameras recorded the action.

Nedobeck and Collins, the brothers-in-law who concocted this scheme, took a break from fishmongering to look at their construction project as it rose on the northwest corner of N. Broadway and E. St. Paul Ave. Each expressed relief that they did not try to pursue this project on their own, but instead handed it over to the professionals, who would not be as liable to break things.

“Wait until this bar gets lit up at night,” Nedobeck said, looking forward to sundown. “You’ll be able to see it from blocks away.”

As the wall around him rose, Nedobeck set to work arranging his favorite habitat, the outdoor bar, readying it for its opening Friday evening at 5 p.m., when drinks were to flow outside for the first time since November, and shall again for, he hopes, a few weeks. The workers, with their chisels, ice picks and chainsaws, continued their precision crafting, operating very much like a well-drilled team as Nedobeck organized his shelves with the accoutrements of al fresco tavern keeping.

Then, work halted for a moment as a terrible crashing sound rent the air with its sound. What was that?

“Oh, that was me,” Nedobeck said. “I just broke a glass. I guess the bar is already back in business as usual!” 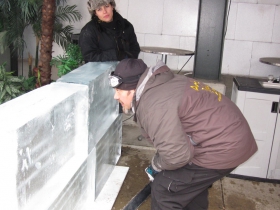 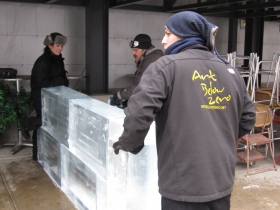 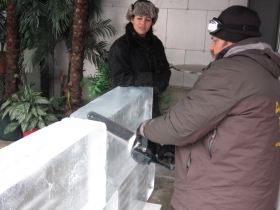 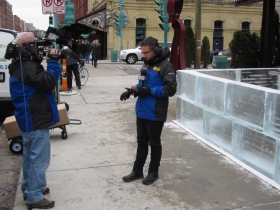 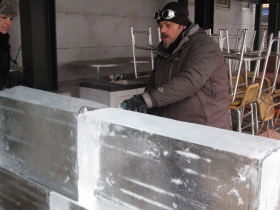 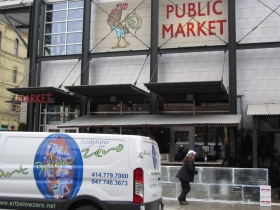