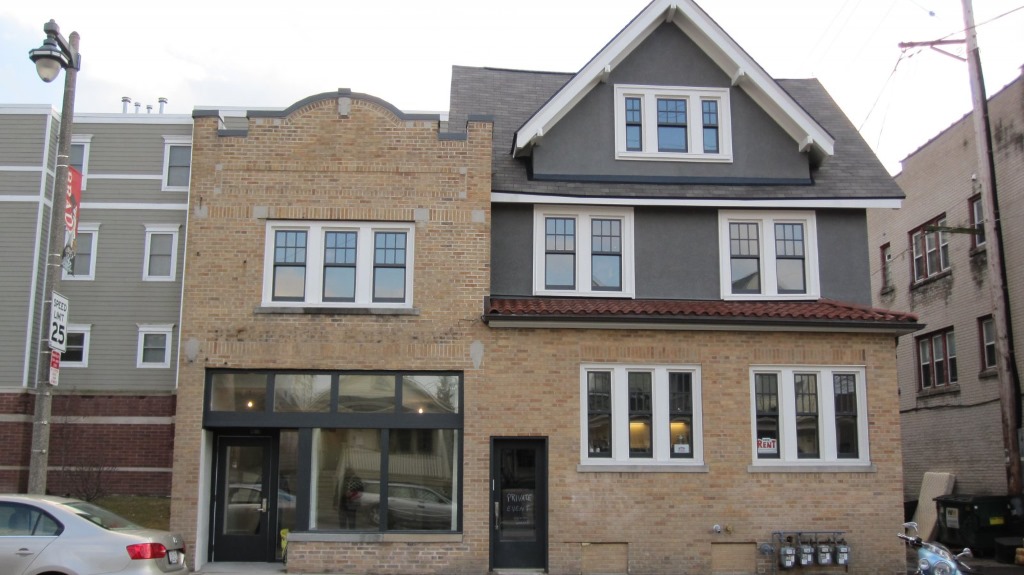 A “For Rent” placard in the window of the former Pecoraro Food Market, 827-829 E. Brady St., is the first sign of commercial activity in the 1916 building in decades.

Even though they have three apartments and one store to fill, husband and wife team Russell C. Drewry and Cassandra Zumstein closed their land office for the day to host a private event Saturday, January 22nd in celebration of receiving their Certificate of Occupancy on December 22nd.

Instead of inviting likely future tenants, the pair hosted a get together for their contractors and dozens of Brady Street neighbors with a themed party paying tribute to Brady Street’s colorful Sicilian heritage.

Tables groaned under the weight of bounteous spreads of antipasto. Dozens of bottles of fine Italian wines were offered to the guests. The organizers did not neglect Italian beers, although the attendees did. 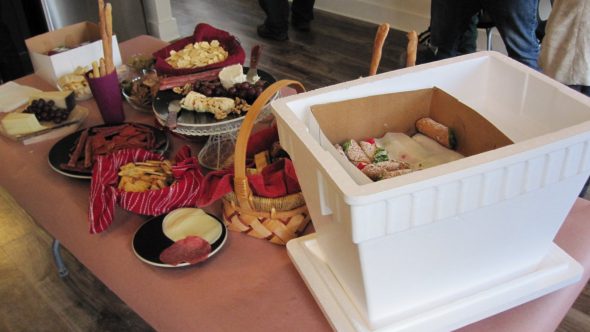 The centerpiece of the buffet was a plate of pepperoni sausages and a cooler stacked with cannoli. This culinary observation would be of little significance to a stranger in the neighborhood, but to Brady Street lifers, it was fraught with import, since it conjures up images of Frank “Pepperoni Cannoli” Pecoraro, who hawked these two items from a similar portable cooler in the bar districts of the East Side until his death at 76 in 2012.

By that time, this place, his former store, a contributing structure to the Brady Street Historic District, had fallen into disrepair and was owned by the City of Milwaukee via a tax foreclosure deed. The Pecoraro residence across the street, which housed his widow and a grown son, was owned by the bank.

The building came to Drewry’s attention during his service on the Brady Street Area Association board in 2014. After a tour of the structure, Drewry, an architect, saw potential in the building, and he and his wife formed an LLC with partner John Miceli with the intent of purchasing and redeveloping the structure. They called their firm Pepperoni Cannoli LLC., and arranged to purchase the property in October 2015 for $54,100, or approximately the value of the 2,215 square foot lot. (Brady Street land is running about $25 per square foot nowadays.)

Building Was a Mess

By the time the Pepperoni Cannoli LLC management took title to the building, it was in rough shape. It had been placarded by the city with a notice that it would be unlawful to inhabit the structure for any purpose. A second advisory directed the Fire Department to not attempt entry in the event of a conflagration. Drewry found three feet of water in the basement. The roof was porous, indeed, and rot was not unknown in the interior. Still, work began to carve out apartments of 984 square feet, 487 square feet and 765 square feet, along with a 600-square-foot retail store with a separate entrance.

The project would run about $330,000 he figured. A few factors helped render it financially feasible. Among them were the reasonable purchase price, Drewry’s architecture license, Zumstein’s design skills and the crucial Historic Tax Credits available for the project.

Also key to the success, Drewry said, was his choice of Carlos Balderas as his remodeling and restoration contractor. Balderas is a big guy, with a gruff voice and an engaging personality, which he demonstrated at the party. Some of his crew arrived by Harley-Davidson motorcycle, a first such outing of the year for them.

A year ago the crew had their hands full stabilizing and reconstructing the building, which had to be done to fire code and historic preservation guidelines, where compliance can be difficult, time-consuming and expensive. 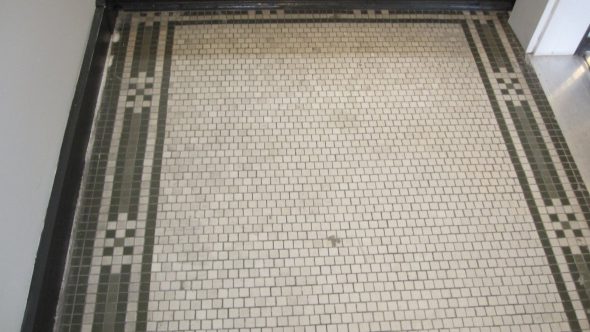 A few architectural elements in the building remained salvageable, including a black-and-white tile landing in the hall, and the staircase leading to the apartments. But the rest of it was down to the studs.

The attic provided a likely space for expansion for the second floor apartment, the largest in the building. “Fine,” the fire inspector said, “provided you outfit the entire building with an automatic sprinkler system.” Drewry saw dollar signs flying out the window. The sprinkler system even includes the wooden porch in the rear of the building.

There was another surprise, Zumstein said, as she showed a guest around. The rear deck was not required for fire protection, or ingress and egress, but would be a convenience for the tenants, she reasoned. The deck is not visible from any vantage point on Brady Street.

Drewry figured it would be nice to fabricate a steel spiral staircase to lead to the upper deck. But the historic examiners at the National Park Service vetoed that proposal, saying that such a structure would not be consistent with the historic building, even if it were invisible to all except the tenants and the sanitation workers. Another expensive surprise.

Undaunted, Drewry dusted off his drafting table and set to work. Unlike a fire suppression system which takes an engineer to design, a conforming wooden staircase could be designed just by an architect, and Drewry came up with a clever wooden simulacrum of a spiral staircase which suited the inspector fine.

Drewry credits his wife for the interior design of the units. She selected period-appropriate ceiling fixtures and outfitted each kitchen and bath with simple, black-and-white granite countertops. The appliances are high-end Whirlpool refrigerators and washers and dryers. The surprisingly attractive and well-built cabinets in wood are from Ikea, Drewry said. The toilets are Kohler-made, and all is done in a most understated and monochromatic fashion, and quite becoming. The floors are wood, and the windows are all new. Rents for the apartments are $800, $1,200 and $2,000, Zumstein said.

A tenant is being sought for the retail space. A city deed restriction prevents it from being leased to a concern whose largest source of revenue would be liquor sales. The West end of Brady Street, traditionally the sleepier half of the nine-block span between the lake and the river, is expected to see a renaissance as hundreds of new apartments in addition to these three will come on line within the next few months.

The west end of the street is also being impacted by the considerable construction just to the south on N. Water St. This once desolate stretch is now nearly fully developed, leading to a continuum between Downtown and the East Side where one had not existed for decades.

Does it Have a Name?

Zumstein said she hasn’t come up with a name for her building. “I’ve just been calling it ‘The Building’ for years now,” she laughed. Perhaps our readers can suggest some names. 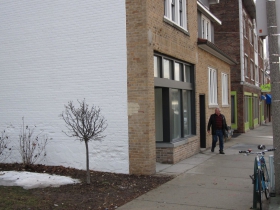 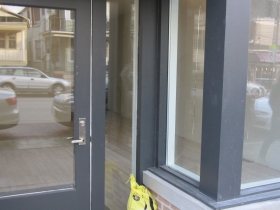 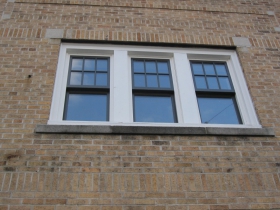 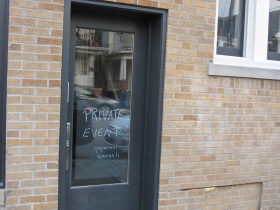 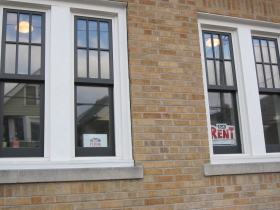 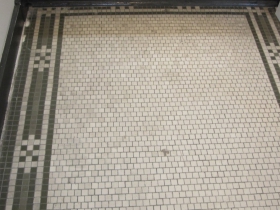