How Will Trumponomics Impact State?

If he targets trade with China, that’s a major trading partner for Wisconsin.

Donald Trump owes his election to former Obama supporters distressed by the economic decline of their communities.

Trump was able to channel this concern, particularly in rural and smaller urban areas, into a promise to reverse globalization. Mainstream economics has long accepted the proposition that trade benefits both parties. But even if society as a whole benefits, the gains are not evenly distributed; trade makes winners and losers. Those whose jobs were lost to cheaper imports will not be impressed by arguments that the society as a whole is better off.

Branko Milanovic, formerly chief economist for the World Bank, analyzed the change in global income over 20 years as compared to people’s income at the start of the period. He found that most of the gains in income were enjoyed by two groups of people: (1)those who moved into the middle class in emerging third world countries, such as China, Vietnam, India, and Indonesia and (2)the super-rich. By contrast middle class people in the US, Europe, and other rich countries saw little gain. The resulting graph (taken from Quartz) sometimes called the “elephant chart” because of its shape, is shown below. 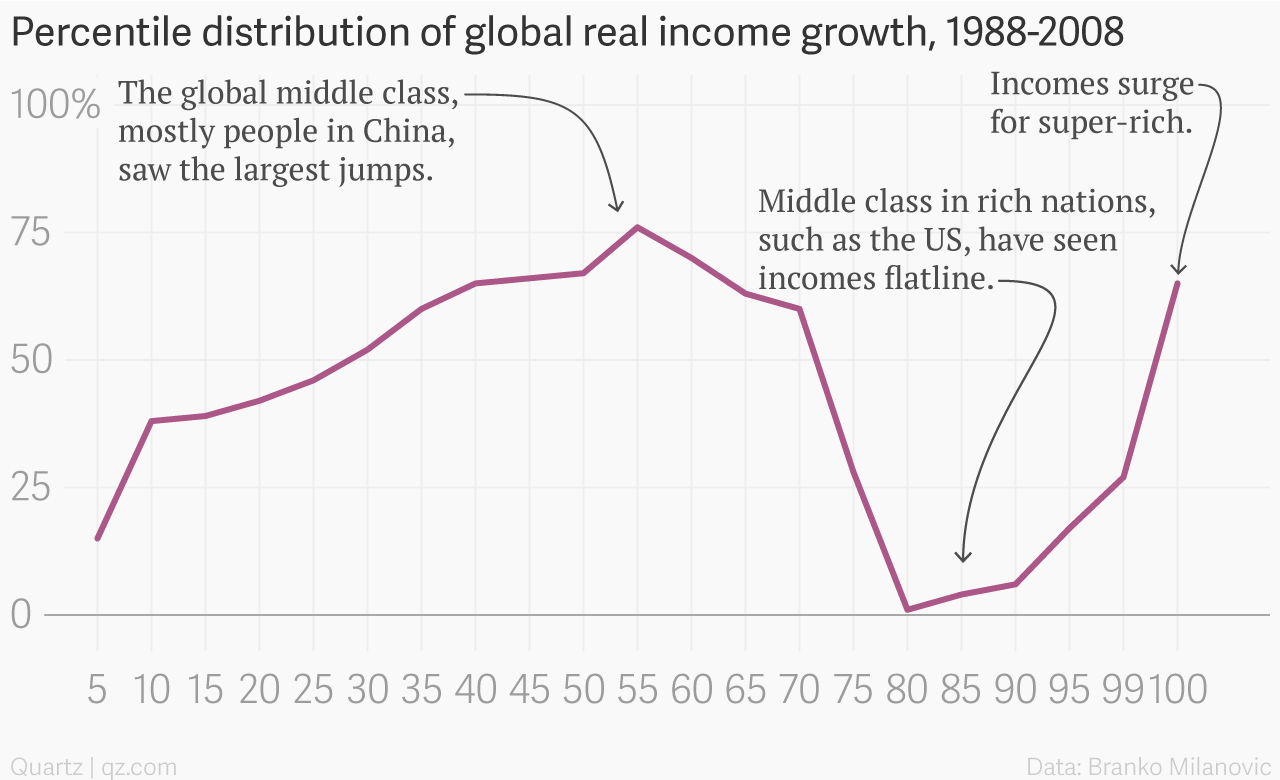 The political implications of globalization, and particularly Chinese imports to the US, were explored by economists David Autor, David Dorn, Gordon Hanson, and Kaveh Majlesi. They examined increased polarization in congressional elections. In an article published in September 2016, they concluded:

Analyzing outcomes from the 2002 and 2010 congressional elections, we detect an ideological realignment that is centered in trade-exposed local labor markets and that commences prior to the divisive 2016 U.S. presidential election.

In a post-election supplement, they conclude:

A counterfactual study of closely contested states suggests that Michigan, Wisconsin, Pennsylvania and North Carolina would have elected the Democrat instead of the Republican candidate if, ceteris paribus, the growth in Chinese import penetration had been 50 percent lower than the actual growth during the period of analysis. The Democrat candidate would also have obtained a majority in the electoral college in this counterfactual scenario.

If “Chinese import gains between 2002 and 2014 were 25 percent smaller Donald Trump would have lost Wisconsin by 1.7 percent instead of winning it by 0.8 percent.”

Other economists argue that automation has had a much larger role than China in destroying jobs. They point out that, contrary to Trump’s claims, US industrial output has increased even as employment has declined over many years.

One reason many smaller towns are in trouble is that they were originally established to serve the needs of farmers. But technology has allowed farms to employ far fewer people while increasing their output. Farms have grown bigger and more mechanized, becoming multi-million dollar businesses. Towns, built to serve the surrounding farming community, find they no longer have the customer base they need, resulting in the loss of businesses, their school, and ultimately many of their young people.

Ironically, Trump’s nominee for Labor Secretary, the fast-food CEO Andy Puzder, made the argument for why businesses prefer machines to people: machines are “always polite, they always upsell, they never take a vacation, they never show up late, there’s never a slip-and-fall, or an age, sex, or race discrimination case.”

It is likely technology will continue to destroy jobs. For example, think of the push to develop self-driving vehicles. One labor market growth area recently has been for truck drivers. If self-driving trucks become viable, what happens to this market?

Although Trump owes his election to the losers in the evolving economy, he is staffing his administration with the winners, the super-rich. While some very rich people recognize that they are the beneficiary of luck and show compassion for those less fortunate, Trump’s picks are not among them, according to an article by Ray Diulio. Here is his description of the culture of the emerging Trump administration:

Regarding economics, if you haven’t read Ayn Rand lately, I suggest that you do as her books pretty well capture the mindset. This new administration hates weak, unproductive, socialist people and policies, and it admires strong, can-do, profit makers. It wants to, and probably will, shift the environment from one that makes profit makers villains with limited power to one that makes them heroes with significant power.

Diulio should know the type. The founder of the Bridgewater money management firm, he is a multi-billionaire himself.

The Trump supporters were remarkably loyal to Trump, and willing to overlook the many risks that came with his election. Following Trump’s victory, there was a spate of articles profiling Trump voters panicked that they would lose their health insurance through Obamacare. They seemed to be hoping that, in this case, Trump didn’t mean what he said.

That’s not the only area where the Trump victory represents a potential threat to the welfare of his supporters. Although he promised to protect Social Security and Medicare, that has not stopped him from appointing people who have a long record of advocating cuts to these programs. And the Medicaid expansion that came with Obamacare is another example of a program whose ending would disproportionately affect areas that supported Trump.

Trump’s ability to read audiences and say what they want to hear makes it hard to predict what policies his administration will follow on most issues. However, to back out of the promised crack-down on Chinese imports would be especially costly because it would be a betrayal of his supporters.

Thus, it seems safe to assume there will be a turn to protectionism. One plan under consideration by the Trump team is an across-the-board 10 percent tariff on imports. Presumably many of our trading partners would apply similar tariffs on imports from America. As a result, America would likely import less, but also export less.

Another approach tries to be more selective. Particular imports from China might be targeted—for examples, browse the shelves of Walmart. The Chinese in turn are likely to put tariffs on selective American products—such as airplanes from Boeing—where China is a rich market for the U.S.

The US Census Bureau issues annual reports on exports and imports for each state. For Wisconsin the two are in rough balance, as shown below. 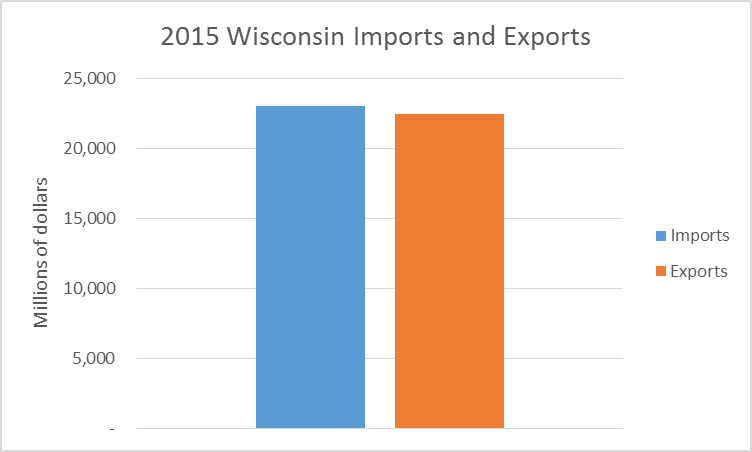 The Census Bureau also lists the 25 top trading partners. As shown below, the top three for both imports and exports are China, Canada, and Mexico (the numbers on the bars show the rank), although China exports a lot more than it buys and Canada imports well more than it sells. 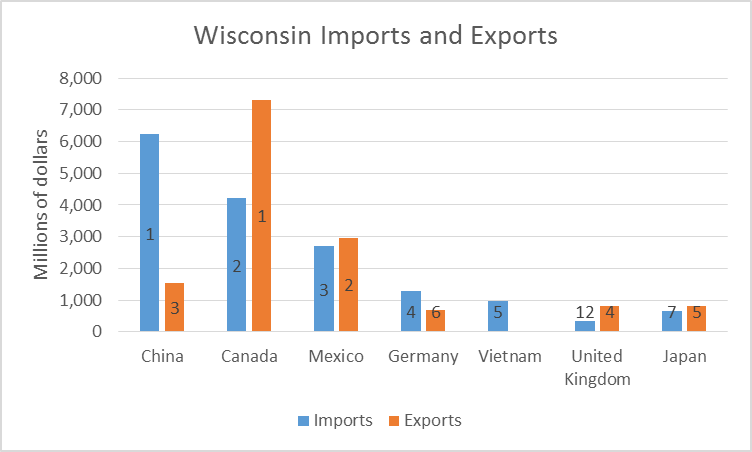 The bureau also lists the top 25 products exported and imported. Here, the lists are quite different. Wisconsin’s exports are heavy on mechanical equipment (although the top export is adrenal cortical hormones). By contrast, many of the imports are things likely to show up in Wal-Mart. About a quarter of the value of the top 25 imports are clothing, fabrics, and footwear.

Wisconsinites could be paying more for these items while its manufacturers lose business in China. Could that hurt manufacturing employment here?

But it’s not that simple. A number of the items on both lists are parts likely to be incorporated into other products. Thus a tariff could make a variety of American and Chinese products less competitive.

Increased world trade has disrupted many communities as supply chains are continually redesigned. Trying to undo globalization could be equally disruptive, redesigning supply chains once again. Some firms—and their employees—will benefit; others will lose out. Trying to target protectionism so that only workers in some states benefit (say, Rust Belt economies of Michigan, Wisconsin, Pennsylvania and Ohio) could be very difficult to do. And even if it could, it opens the door to complaints from other states.

Politically, in my view, Trump has to follow through on his commitment to reverse globalization. The result, however, seems unlikely to benefit those who put their faith in him. More broadly, the administration that is emerging is one that shows remarkable disdain for the people who put them in power.

12 thoughts on “Data Wonk: How Will Trumponomics Impact State?”