Sea of red 17 blocks long as thousands bicycle North Ave. from Tosa to the Beerline.

By Dave Schlabowske, Bike Federation of Wisconsin - Dec 10th, 2016 02:46 pm
Get a daily rundown of the top stories on Urban Milwaukee 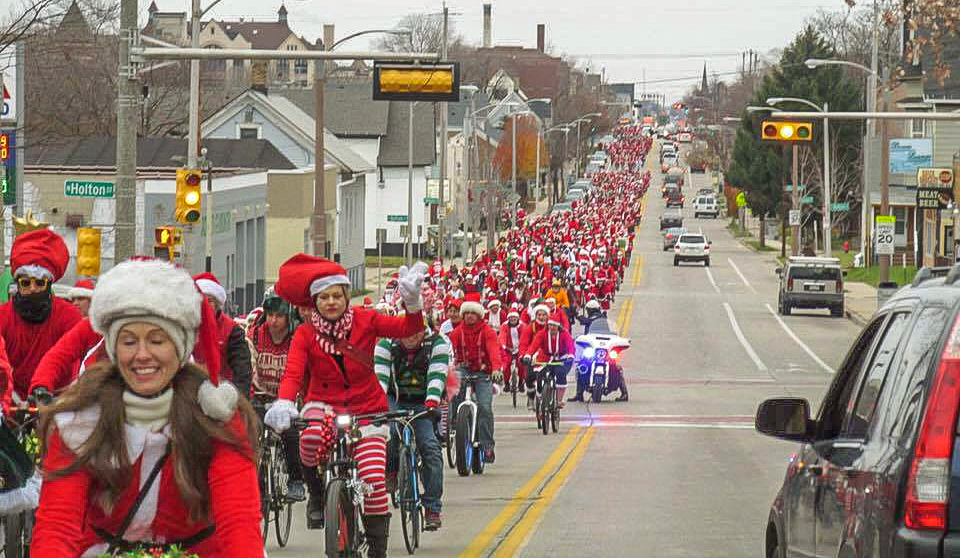 How many were there? We don’t have an exact count, but that is a whole lot of Santas! This photo, taken looking west from Booth Street, shows the sea of Santas stretching at least 12 blocks west to Dr. Martin Luther King Drive.

By all accounts, this year’s Santa Cycle Rampage ride in Milwaukee was the biggest and best ever. We had about 450 people register for the Bike Fed’s ride from Cranky Al’s Bakery to Lakefront Brewery, but because so many people ride but don’t register, estimates range from 1,000 to 2,500 merry men, women and children pedaling joy around the greater Milwaukee area. At one point, Milwaukee Police leading the ride told me the sea of red on North Avenue stretched from Sherman Boulevard to 60th Street, 17 city blocks! 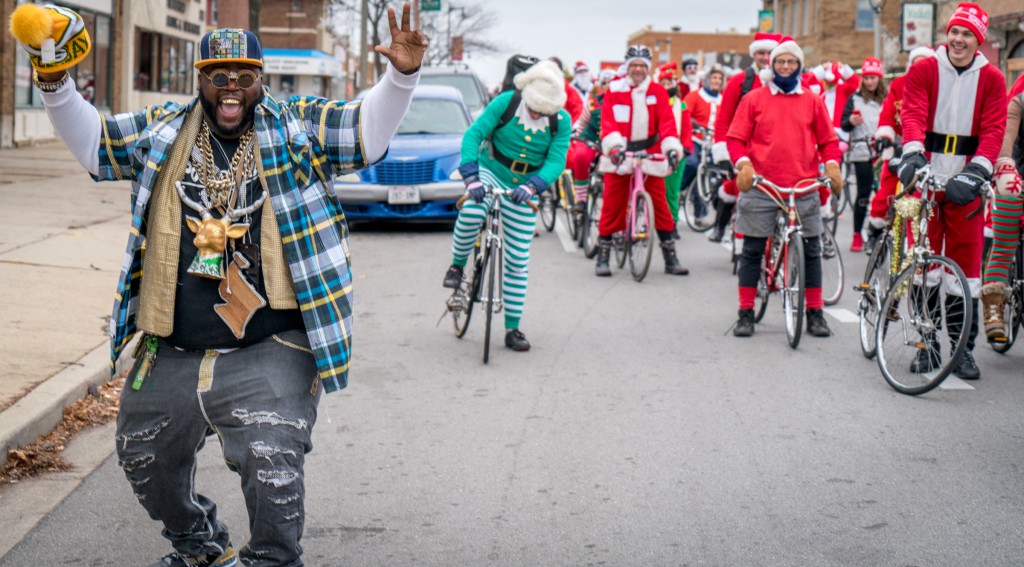 Stephen “Kingjuice” Jackson cheers on the Santa Rampage outside Sho-N-Out Barbershop at 55th and North Ave. I live nearby, and I’d like to give a shout out to King Juice for putting some joy in my heart every time I ride by and see his smiling face and Juicewear.

Perhaps more important than numbers is the impact the sight of so many holiday merry makers has on everyone who witnessed the ride. People in cars pulled over and rolled down their windows to cheer and take videos. People walking down the street stopped in their tracks with huge grins and waved. After the initial shock of seeing so many Santas on bicycles wore off, children gleefully grabbed candy canes handed out by riders.

When we were stopped at Sherman Blvd., Nancy Yarborough came out of her office to cheer and share a video of her reaction to the Rampage on Facebook Live. A Santa on the ride knew Nancy, so we were able to get a copy of her video. Nancy runs Fresh Start Learning, a non-profit that works with people who have been the victims of human trafficking, domestic violence and homelessness, seriously important work. We could not be happier to have brought a little holiday cheer to her day. Thanks to the Santa Cycle Rampage, Nancy and I plan to get together this week to meet and give each other a hug. 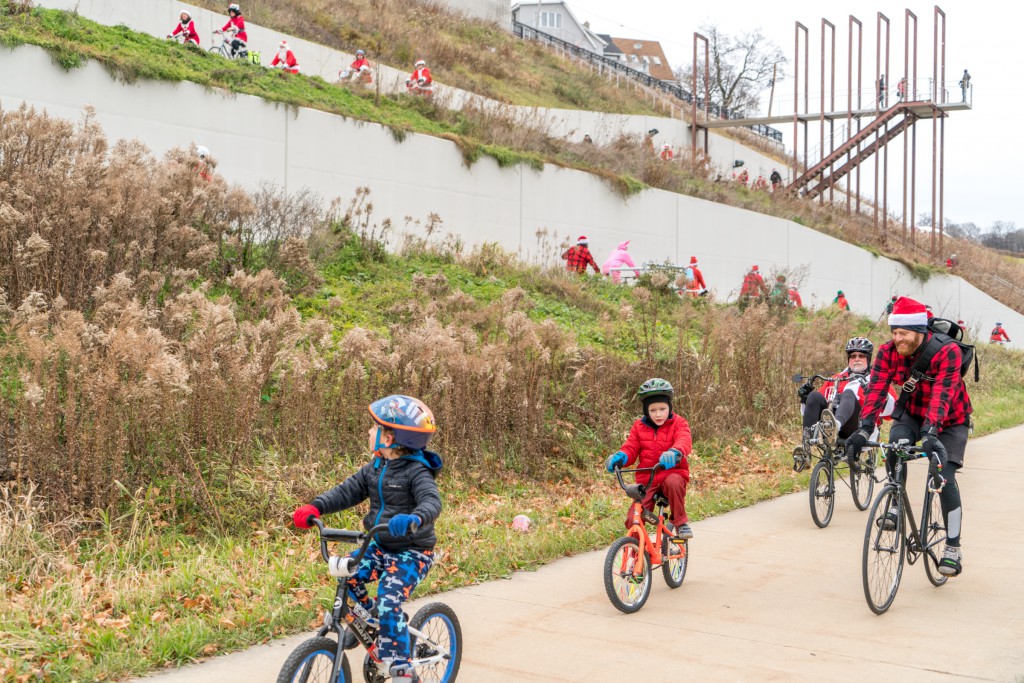 The Beerline Trail, Booth Street Stairs and Marsupial Bridge were not inexpensive investments, but those improved bicycling and walking connections literally helped knit together the neighborhood and spur hundreds of millions of dollars of reinvestment, turning a blighted river corridor into an economic success story.

Riding bikes, having fun and raising money for the Bike Fed are all good reasons to join the Santa Cycle Rampage, but at its core, the ultimate goal of the ride is to share a feeling of joy that we get riding bicycles. We hope this encourages more people to ride, and those who don’t to smile every time they see someone else riding a bicycle. We honestly believe that bicycles are one of the simplest solutions to many of the complicated problems we face today.

So it is purposeful that our ride begins in East Tosa, a Wauwatosa neighborhood that leveraged a bicycle and pedestrian redesign of North Avenue to create an incredibly vibrant and economically successful neighborhood. It is also no accident that the ride continues east on North Avenue, through some of the poorest Milwaukee neighborhoods that many people are afraid to drive through. Finally, it is by design that the ride ends in the Beerline District, where the City of Milwaukee leveraged improved connections for bicycling and walking along Commerce Street to create a vibrant and economically healthy neighborhood. 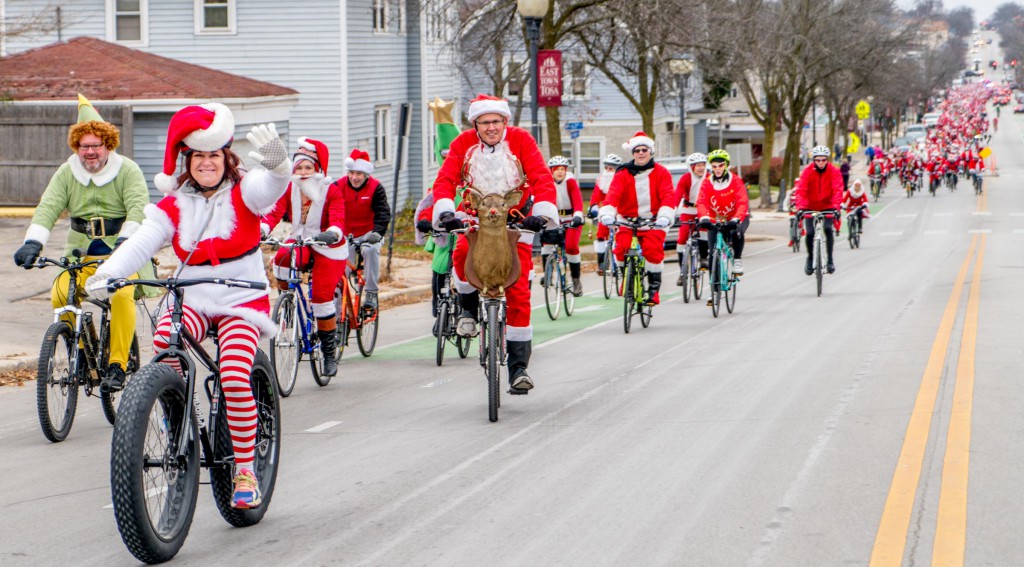 The Rampage is all about the smiles and waives.

We understand it took more than just green bike lanes to make East Tosa the destination business district it has become, but they were an essential part of the redevelopment from the beginning stages of planning. We also understand there were other forces that helped create the success in Milwaukee’s Beerline District, but the trail and the Marsupial Bridge were catalytic investments that have resulted in a hundredfold return on investment.

Of course, the ride is also a FUNdraiser for the Wisconsin Bike Fed to help us advocate for better bicycling facilities across the state, and help us continue to teach thousands of kids and adults how to ride safely and legally. So thank you to everyone who joined us for the most successful Santa Cycle Rampage in the 16 years or so we’ve been doing this.

Special thanks to our sponsors for hosting so many official Santa Gathering Places around the greater Milwaukee area. This year our ride even included a FREE post-Rampage, old-school, hip-hop concert at Red Dot featuring Digital Underground! Many of these businesses benefit by hosting us, but not all do. Some just support our mission, so thank you. Last but not least, we want to thank the Wauwatosa and City of Milwaukee Police departments for coming out on a chilly December morning to lead our ride, block traffic and keep us safe.

If you haven’t been on a Santa Cycle Rampage or witnessed our ride, check out the photos below from this year to encourage you to join us next year. We also have a fun video from last year’s Rampage done by Richard Beauchamp and our friends at Mainly Editing to give you an idea of what to expect. Thanks also to Eddie Blazonczyk, Sr. (July 12, 1941 – May 21, 2012) and The Versatones for the perfect background music. Blazoncyk, from south of the Cheddar Curtain, was a Grammy award-winning musician and is deservedly in the Polka Hall of Fame. 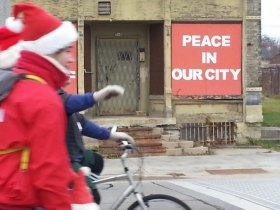 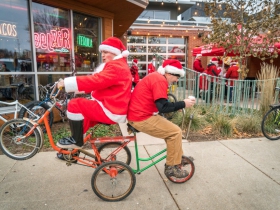 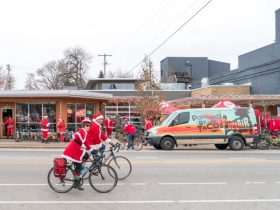 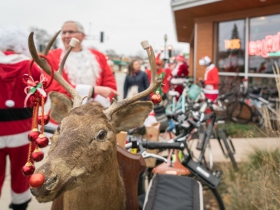 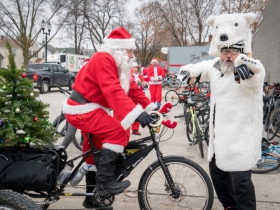 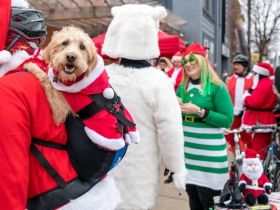