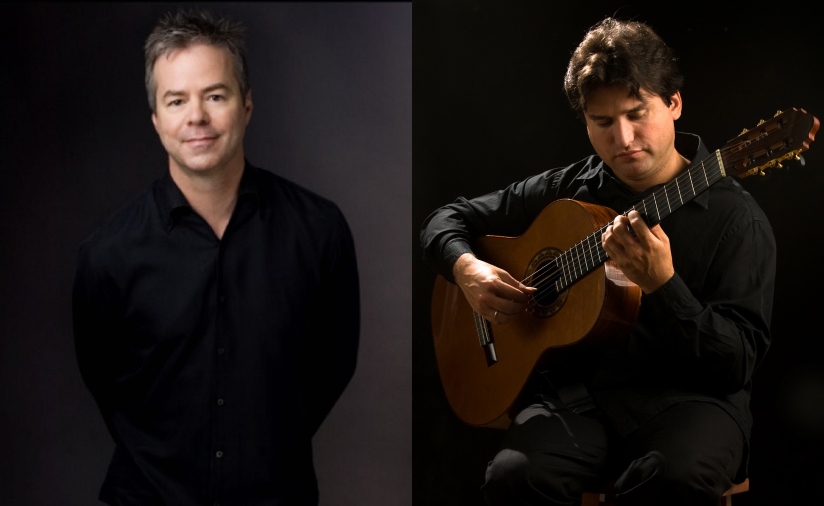 Frankly Music performs the second concert of the season Monday evening featuring classical guitarist Rene Izquierdo. Artistic Director Frank Almond expressed his excitement about the concert: “Rene is one of the great guitarist in the world. We are lucky to have him in Milwaukee. Rene and I have been talking about playing a chamber music concert together for at least eight years.”

Almond’s other guests will be familiar to many, as they Milwaukee Symphony Orchestra players who also perform on other programs around town. Violist Nicole Sutterfield serves as Associate Principal violist in the MSO and has been extensively involved in music education. Violinist Margot Schwartz plays with the Prometheus Trio, the duo Bowing Rogue and with Present Music. Cellist Peter Thomas has performed with the Arcus Quartet as well as in cello duos. He also plays electronic cello for a creative rock band, I am not a Pilot.

The guitar was a frequent and popular chamber instrument in the Baroque era. Even though all string instruments have improved over the last centuries, those changes have not afforded the guitar the dynamic volume achieved by the violin family of instruments. Izquierdo observes that the classical guitar does have a wider pitch range today and notes its differences with more traditional strings. “When you are using a bow, you have a sustained vibration all the time.” The contrast between a plucked and bowed sound offers a unique aural experience.

Almond and Izquierdo will play a violin and guitar duo by Nicòlo Paganini. Although he achieved fame as a virtuoso violinist, Paganini also played classical guitar. Many of his compositions for violin and guitar assumed a less accomplished colleague accompanied his violin on guitar. But for Sonata Concertant for Violin and Guitar, op. 61 (1803). Izquierdo observes, both instruments have equivalent parts – exchanging roles – as a way to highlight both instruments.

20th century Italian composer Castelnuovo Tedesco was encouraged to write for guitar by Andre Segovia. He wrote nearly 100 works incorporating the guitar including the Quintet for guitar and strings, Op. 143 (1961), commissioned by Segovia for a late appearance in the United States. By this time, Tedesco lived in Hollywood writing film scores. Izquierdo will perform the piece and finds the variety of moods in it reflect the Hollywood experience. “In the variety of themes and textures we have a lot of characters that are movie like – Spanish with a flavor of the Italian Toscanni.”

Astor Piazzolla redefined tango rhythms for mid-twentieth century performance. His History of Tango (Historie du Tango), from 1986, conveys the history and evolution of the tango in four episodes: A high-spirited tango danced in 1900’s bordellos, a romantic melancholy tango played by small orchestras to audiences content to listen in 1930’s cafes, a merger of bossa nova and tango styles with a more pronounced beat in 1960’s night clubs and a “modern-day” style intertwined with music of Bartok, Stravinsky and other composers.

As with many Piazzolla works, History of Tango was readily adapted to different instrumentation. Originally for flute and guitar, Monday’s concert will play a transcription for violin and guitar. Izquierdo argues, that compared to the flute, “the violin sounds a lot more tango. It works really well.”

Izquirdo will also play a selection of short solo pieces. He brings a precise, intimate quality to his instrument. A Classical Guitar Magazine review declares that “His natural and instinctive interpretations are second to none: his virtuoso technique allows him absolute command of the instrument giving him the independence of subtle phrasing, dazzling speed, beautiful tonal control… everything.”

An Associate Professor of Music at the UW-Milwaukee Peck School for the Arts, Izquirdo has encouraged a culture that is rare at this university. An annual guitar performance series of six to eight concerts a year brings the world’s best guitarists to Milwaukee. The master classes are a critical dimension in student education. Izquido observes, “This is a very important element. The students and I learn how to do something different.” The program has also identified a Milwaukee community of guitar enthusiasts. The Milwaukee Classical Guitar Society helps to bring good crowds to series concerts. The neutral, clear acoustic of the Fine Arts Recital hall has proven an excellent venue for guitar performance.

Although some details have not been finalized, concerts this spring feature Italian Desiderio Aniello (February 2), Englishman Michael Partington (February 17), Uraguan Alvaro Pierro (March 31), American Adam Holzman (April 14) and American Eliot Frank (April 21). Izquirdo identifies Alvaro Pierro as the highlight of the season. “He is one of the best guitarists of all time.” Revisit this link for performance details.

Izquirdo himself travels the world giving about 90 concerts a year as well. He recognizes his playing as a recruitment tool, which has led to a large, successful guitar program in Milwaukee. The program offers a multi-style approach in which students choose a primary and secondary style among classical, jazz, flamenco, and finger-style guitar – a unique mix.

Frankly Music performs its fall concerts at St. Paul’s Episcopal Church, 914 E. Knapp Street in downtown Milwaukee. The concert begins at 7:00 p.m. Tickets ($35/ $15 for students) may be purchased at the door or online.

The third of the season’s four concerts, Monday evening, January 23, 2017 features Winds and Strings at Wisconsin Lutheran College. The concert will include music by Haydn, Ferroud, Berger, Bernstein as well as Mozart‘s monumental Divertimento in B flat for two horns and strings.