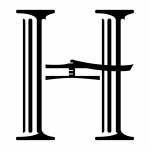 Frozen Custard Capital of the World

Why is Milwaukee the leading city for this uniquely rich treat? Excerpt from new book. 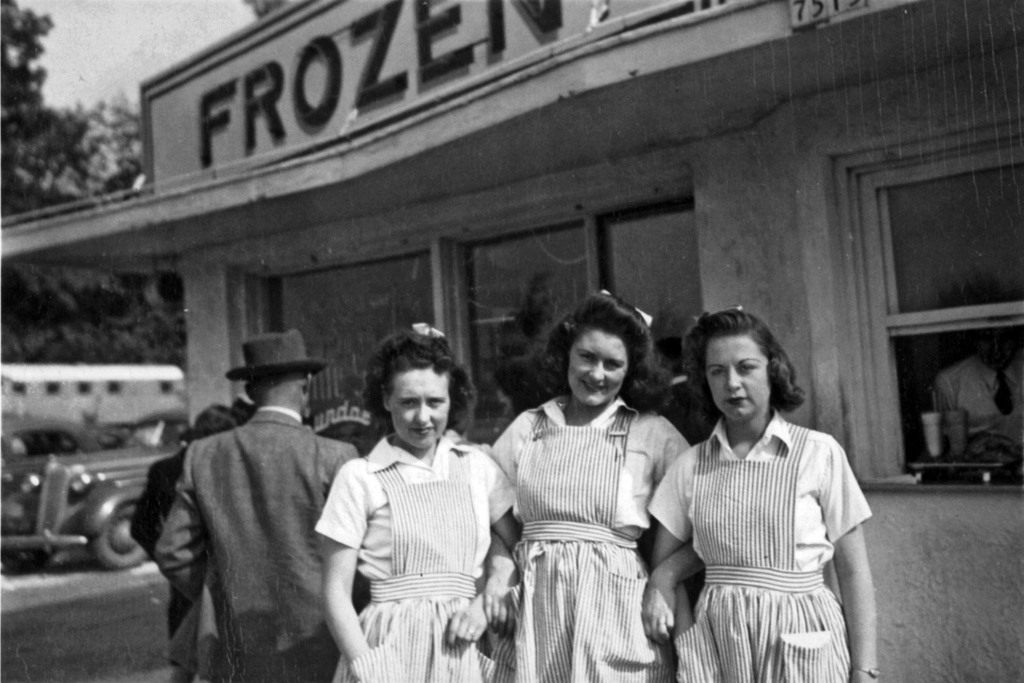 Milwaukee is known as Brew City thanks to its once prominent beer brewing tradition, but the city has another claim to fame: frozen custard capital of the world. Here, names like Leon, Gilles, Kopp and Culver are as well known as Miller, Best, Blatz, Pabst and Schlitz. And often they conjure deeper memories and stronger opinions than their beer-brewing counterparts. And while beer-drinking culture is reserved for adults, Milwaukeeans of all ages indulge in the passion for custard.

Frozen custard makes people happy—at least, that’s what America’s amusement park proprietors who met for an informal convention in New York opined in 1932, according to a United Press International article. The attendees included frozen custard among four things that “best to contribute to the world’s happiness.” (The other three were bumper cars, carousels and roller coasters.). Whether or not your average New Yorker at that time would have agreed is unclear. But in Milwaukee, past and present, custard is serious happiness. Frozen custard looks much like ice cream to the uninitiated, but it is denser and creamier thanks to the inclusion of egg yolks. When you eat it, the superiority of frozen custard is immediately clear. Even those who grew up eating other frozen desserts—there were plenty of A&Ws and Dairy Queens serving ice cream and soft-serve in the area—can readily agree that custard just tastes better, even if they’re unsure as to why. But that’s where the agreement ends. 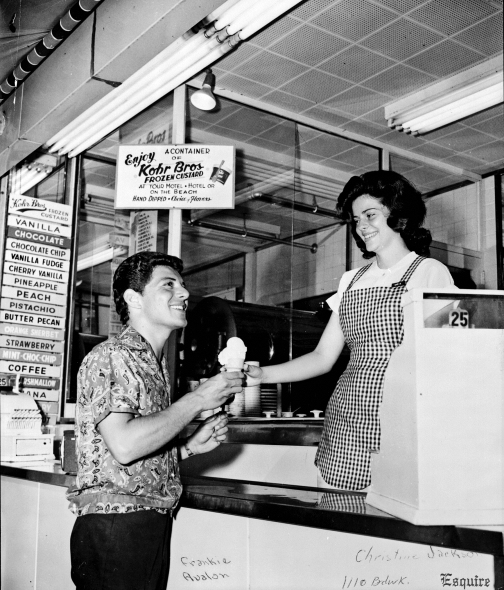 Nearly everyone has his or her favorite frozen custard stand and will defend its superiority with vigor. That said, we’re all happy to explore different custard stands, if only to reinforce our existing preference. The only other food that engenders such passions among locals is the Friday night fish fry.

The question of whose custard was superior was aired in August 1981, when a blind taste test was conducted at the Hyatt Regency–Milwaukee hotel. Differing news accounts pegged attendance between 500 and 2,000 folks who turned out for the black-tie affair, dubbed Custard’s Best Stand. Vanilla samples from thirteen stands were scored on appearance, texture, flavor, aroma, sweetness and body. The panel of 25 judges was chosen from a pool of 375 applicants and based on a written test of custard knowledge. It took the judges two hours to complete their sweet, if filling, task, which included custard from Gilles, Kitt’s, the Fudge Pump, Kopp’s, Pig’n Whistle, Al’s, Le Duc’s, Northpoint, Pop’s, Petroff ’s and three Town Pride stands. In the end, Kopp’s copped the title, with Kitt’s taking second and Town Pride’s Teutonia Avenue stand finishing third.

Such an inclusive taste-off hasn’t been attempted since mostly because custard purists eschew packing it in ice for travel, which changes the consistency. But there are plenty of instances of informal custard outings for which groups travel to a number of different stands in one day, including Marquette University’s student government custard crawl held in fall 2015 as part of its back-to-school activities. Stories of wedding parties stopping off at a custard stand between nuptials and reception are not uncommon, sometimes because the couple’s romance began under the neon lights of that particular drive-in. When native Milwaukeeans living elsewhere return home for a visit, a trip to the custard stand is a must, and sometimes, it is the first stop after exiting the airport. For some, that first custard fix is even more immediate thanks to the Northpoint Custard stand located in General Mitchell International Airport’s main concourse.

Though fresh frozen custard began in earnest at Coney Island in Brooklyn, New York, it is Milwaukee that can surely claim the title of frozen custard capital of the world. Why? Numerous ideas have been floated over the years as contributors to the “perfect storm” for frozen custard’s adoption here, among them Wisconsin’s dairy tradition, access to fresh cream and the proximity of the University of Wisconsin–Madison’s Dairy School, believed to be the first of its kind in the Western Hemisphere when it began offering dairy foods courses in 1890.  “A lot of it has to do with [the fact that] we’re the dairy state,” says Joe Bartolotta, Milwaukee restaurateur and owner of several custard enterprises. “We have access to higher butter fat milk that may be harder to get in other markets. The butter fat content is much higher in custard than it is in ice cream. I think that may be part of it.” 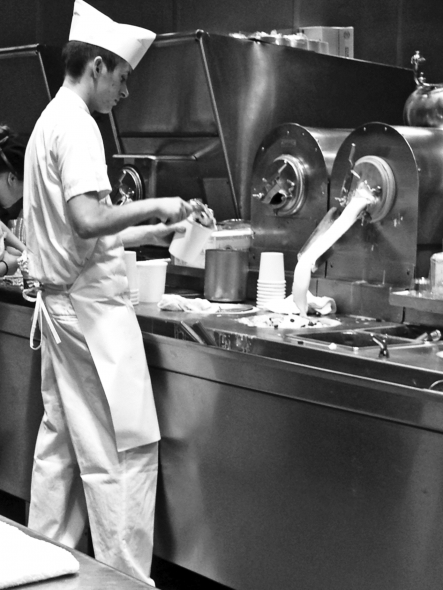 Scooping up frozen custard on a busy night at Kopp’s Frozen Custard’s stand in Greenfield. Reprinted from Milwaukee Frozen Custard by Kathleen McCann and Robert Tanzilo (The History Press, 2016).

Because the high-quality dairy mix used in custard machines is an integral part of its appeal, the fact that one of America’s foremost suppliers, Galloway and Company, is based in Fond du Lac is likely a major contributor to custard’s popularity, though mix could be shipped in iced rail cars in even its earliest days.

“No one can say for sure,” says the company’s Ted Galloway, “but let’s face it, Wisconsin was heavily Slavic, Germanic, Polish—people who were hard working and so they consumed calories and they consumed good, nutritious, full-flavored food. Custard is certainly a good, nutritious, full-flavored food. Now some people would debate about fat, but people are rediscovering that dairy fat is not really that bad.”

Some folks have even ventured that access to high-quality ice at nearby inland lakes was a contributing factor for early adoption. Yet ice isn’t unique to Wisconsin.

Another important component of fresh frozen custard manufacture is the machines that refrigerate and spin the mix. Stoelting, based in Kiel, is to this day a major supplier of machines for making custard and other dairy desserts and for years ran its own education programs that attracted international attendees, according to its website.

Leon Schneider, of the eponymous Leon’s Frozen Custard, also worked as a custard machine salesman and, later, manufacturer and repairman. Schneider’s son Ron, who now runs Leon’s, attributes the city’s passion for custard to something else, something that can never be replicated: the synergistic results of numerous stand owners who had strong work ethics, a laser-pointed attention to quality that raised the bar to an incredibly high standard and the generosity to share their passion. He explains: Between Joe Clark [who opened the first custard stand in the Milwaukee], who wanted to do a good job; Paul Gilles [Gilles founder], who also wanted to do a good job. My father, Leon Schneider, taught many people about the custard business: Elsa Kopp [founder of Kopp’s], for one, Al Lach [who started Al’s Drive-In], the Town Pride stores, the owner of Trudy’s. He would welcome the competition. He felt that the more people who did a good job with the product, the more the product would become known. This would help us. A bad store down the block does us no good, because if at the first place the customer stops to try frozen custard, he eats lousy product, when he’s driving by here, he’s not going to stop. They say, “What’s the big deal? It wasn’t any good.” We had more frozen custard stands in this area, geographically, than anywhere else. [But] why I firmly believe this area became the custard capital, if you will, is because there was good product; there was more of it than anywhere else.

Karl Kopp, who owns two of the most popular stands in the area, thinks Schneider might be correct. “Maybe it’s the fact that we have a lot of good ones,” he muses. “They didn’t dilute it. They kept it. I think that’s what kept it going here. Guys were pure and didn’t bastardize it.”

3 thoughts on “Frozen Custard Capital of the World”