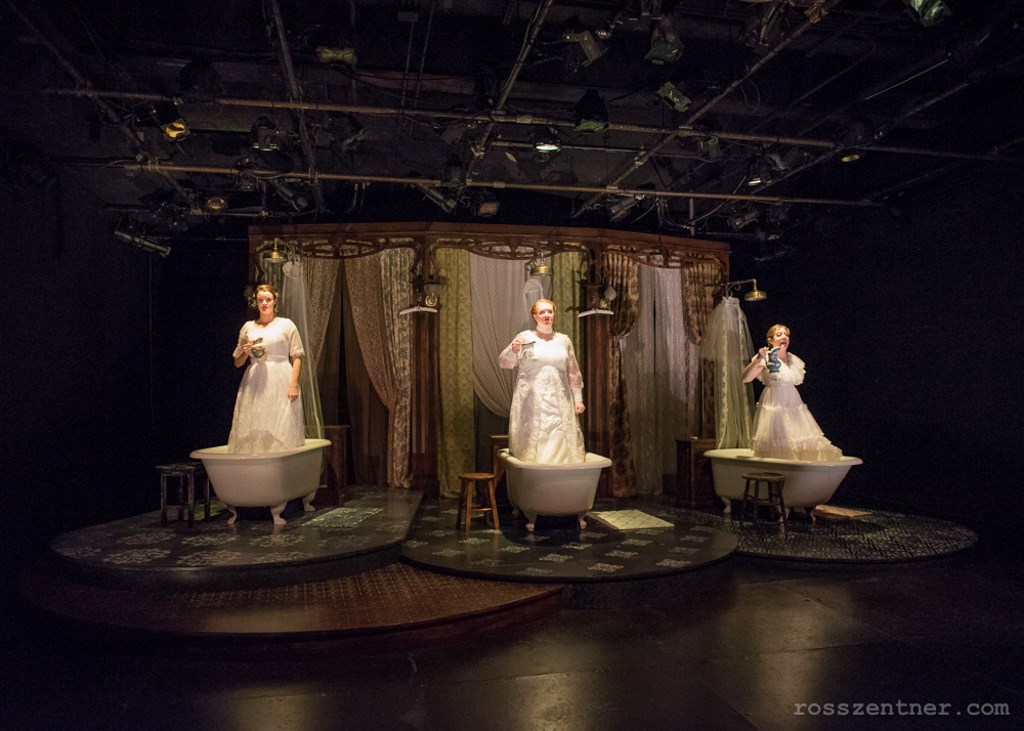 It’s a bit off-putting when a theater company devoted to good roles for women advertises The Drowning Girls as a Halloween offering through Nov. 16.

Despite it macabre premise and forced touches of black comedy, this Renaissance Theaterworks production isn’t out to scare us, but to dramatically contemplate three lives that a century had reduced to crime statistics.

They are the three newlyweds drowned in bathtubs by a serial killer who changed his names and marriage licenses but not his methods. He wooed, married, took their money, painted them as subject to fainting spells and then killed them. In visually striking ways, the story imagines their internal lives and also explains why it took turn-of-the-century Scotland Yard so long to catch on to the pattern.

It is the state of women then as much as the state of women now that draws Canadian playwright Beth Graham and her two collaborators, Charlie Tomlinson and Daniela Vlaskalic, for this play. It was written some 16 years ago, reworked and has attracted companies as close as Chicago to its possibilities. While Psycho kept viewers from showering for years, this play holds no similar terrors for bathing, so delicately are the actors forced to step in and out of the tub.

Some audience responses come from our realization of the difference time makes in perception —  women were already regarded as doomed spinsters in their twenties, women were prone to the marriage appeal of a stranger, women were dealing with male doctors who wrote off everything as female troubles, women were devoted to that vision of romantic love so popular in the literature of the era – and our era, too, for that matter.

The brides are three different physical types with the same dream and the same fate. Elyse Edelman plays the sparrow, chirping with delight at her catch. Susie Duecker is the adventurous one willfully disobeying her family to run away. Marcee Doherty Elst is the matron skeptical about his claims that she is feeling ill, but not enough to dissuade her from bathing around him.

This is a theater piece at the Studio Theater of the Broadway Theatre Center that relies on technical elements in its search for an afterlife.  Around and in the three tubs the women are dancing in their nightshifts or wedding gowns and handling cups of tea, their memories flooding as the showers go on. This world has been arrestingly created by scenic designer Sarah E. Ross — and that is only the surface of the craft. The significant timing issues for props, lights, costumes and water use must be drenching the talents of stage manager Amy Witherby. That is, when director Mallory Metoxen’s demands aren’t draining her.

Metoxen reaches (sometimes intelligently but often too obviously) for the external values, for group choreography and stage patterns. More time should have been spent on acting elements. It sometimes seems the visual devices are more to kill time than to provide a payoff as the women muddy the outside of their tubs or add unified codas to what we have already seen. We get the message long before the play seems to think we do.

The production mixes aspects of the absurd, a presentational style of acting (where characters step out of character to narrate), a Greek chorus echo chamber – but also moments that demand the sort of naturalistic acting that should produce an emotion within us.

It is here the production is weak. It’s not all that important that the British accents of the three come and go (each plays many roles). There can be no criticism of the charm of surface characterization and movement. But each woman has a chance in dialogue for us to get inside her bride’s head and we are left looking in rather coldly. Edelman comes close at times but deserves a pat more for effort than execution.

Over 80 minutes, The Drowning Girls brings these corpses to the surface and lets us observe the story, pushing the humanity of the victims and stirring hatred for the unseen villain whose knock at the door again and again spells doom (history knows him as George Joseph Smith, the name under which he was hanged). But it is more an excursion into technical adroitness than into the horrors of the human heart. 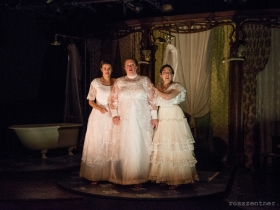 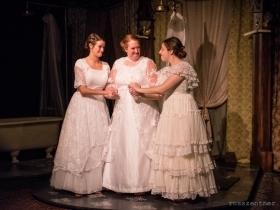 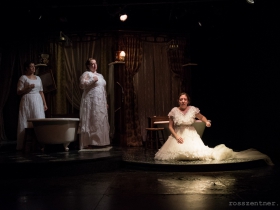 One thought on “Theater: ‘Drowning Girls’ Is Dry-Eyed Drama”