Rhetoric aside, what does the data show?

Recent decisions by United Healthcare and other insurers to leave the federal healthcare market have raised alarms, giving hope to opponents of the act like Schneider and Donald Trump. What can we predict about events in 2017 and beyond, as to whether the ACA is in trouble? 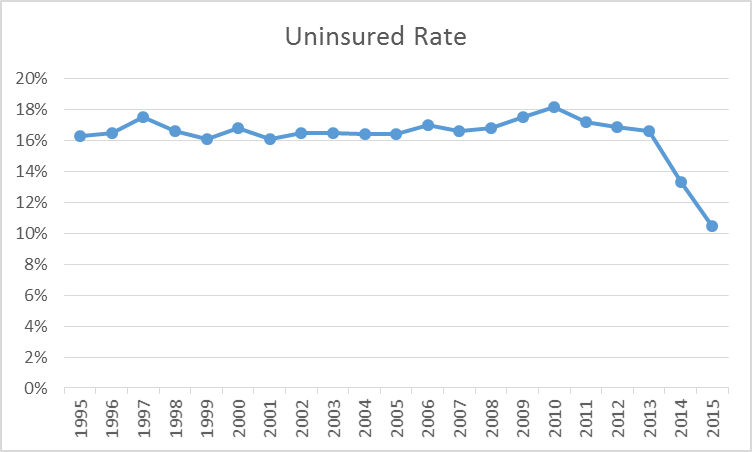 The drop in the rate of uninsured varied widely from one state to another. One important factor was whether the state expanded Medicaid to cover everyone making less than 138 percent of the poverty level. As the chart below shows, on average, states expanding Medicaid (shown in blue) had bigger reductions than those choosing not to expand. 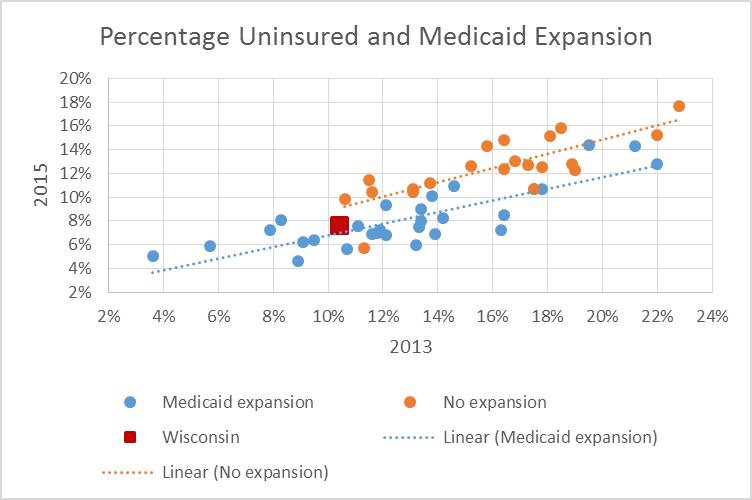 Wisconsin (shown as a red square) is something of a special case, having rejected expansion money while opening Medicaid to anyone making less than 100 percent of the poverty level (mainly adults without children). To make room for them, parents making more than the poverty level were expected to buy subsidized insurance through the federal exchange. Based on its 2013 rate, Wisconsin’s 2015 rate of uninsured falls between states not expanding Medicaid and those expanding it.

Did the ACA cause a rise in health costs, as Schneider seems to charge? For many years medical costs have been rising at a much greater rate than the general cost of living. Even the most enthusiastic advocates of the ACA did not expect it to cause a cost decline; rather, the hope was the growth would start to decline. Based on a number of different measures, that seems to have happened. For example, the Henry J. Kaiser Foundation found the average premium in 2016 was substantially less than the estimate for 2016 that the Congressional Budget Office used in 2009, before the law took effect. (Note that economists are uncertain as to how much of this decline is due to the ACA as opposed to other factors.) 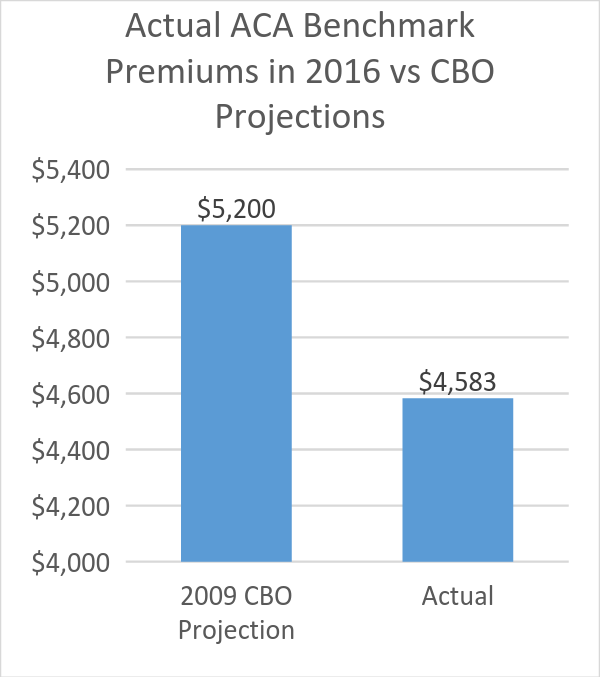 How much will average premiums of the exchanges rise in 2017 compared to 2016? Without disclosing his sources, Schneider claims Wisconsin’s average rates will rise anywhere from 16 percent to 30 percent.

The only systematic analysis that I have discovered comes from the Kaiser Foundation. It is based on proposed rates in the 17 largest cities in 16 states and the District of Columbia. None of those cities is in Wisconsin.

Kaiser finds the average proposed increase for the second lowest cost plan is 9 percent. This is higher than 2016’s average 5 percent proposed increase. The proposed changes varied from a decrease of 14 percent to an increase of 27 percent. Note that these are the prices requested by the insurance companies, which still have to pass state regulators. Last year regulators knocked down average increase requests of 5 percent to an average of 2 percent for the 17 markets in the sample.

It appears that many insurance companies underestimated the cost of policies offered on the exchanges, accounting for both the withdrawal of several companies and higher price increases for next year. One of the causes of this under-estimate is that the companies misjudged how sick the population would be. At the extreme, this raises the specter of “adverse selection”: as prices rise only sick people buy insurance, causing further price rises, leading to a meltdown of the market.

To assess this risk, the government has developed risk scores based on the age, sex, and diagnoses assigned to each enrollee in individual and small group market plans. These scores were developed to compensate insurers whose population was less healthy than average. In a recent report the Kaiser Foundation examined the effect of two state decisions on the average risk scores of the population in that state’s exchange.

The two state decisions were: 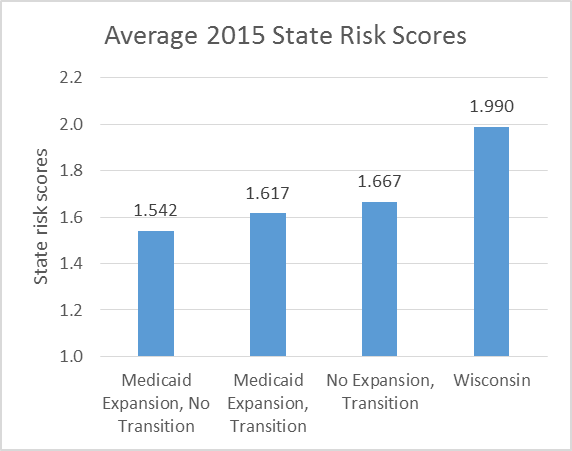 As the graph above shows, on average states which expanded Medicaid had lower risk scores than those which didn’t expand Medicaid. This result is not surprising, since poor people tend to be less healthy. Perhaps poor health interfered with holding a job. Conversely, a lack of resources meant that their health problems weren’t addressed.

Another study compared the cost of exchange plans in counties in states that expanded Medicaid with adjacent counties in states that did not.  Included were Wisconsin counties bordering Michigan and Illinois. It found that “Marketplace premiums are about 7 percent lower in expansion states, controlling for differences across states in demographic characteristics, pre-ACA uninsured rates, health care costs, and state policy decisions other than Medicaid expansion…”

While Wisconsin’s abnormally high risk score can be attributed to its decisions to not expand Medicaid, this doesn’t fully explain the difference. Partly it may reflect our older population; older people have more health problems. Also, prior to the ACA Wisconsin had one of the lower rates of uninsured, possibly implying that those not covered had particularly challenging health issues.

Overall, the ACA has been a success in bringing down the number of people without health insurance. As with any new, complex program it has glitches. Looking to the future, one question is whether the political will exists to fix the glitches or the markets will be left to work around them.

Even if the political will doesn’t appear, it seems unlikely the ACA will suffer a meltdown. But plans on the exchanges may offer more limited provider networks as insurance companies compete on price. It also seems likely that those people willing to pay more for less restrictive networks tend to be less healthy. As a result, these plans are likely to evolve to look more like Medicaid and less like Medicare, with more limited coverage.

As companies such as United Healthcare leave the marketplace, other organizations with experience living with the much more austere payments offered by Medicaid may take their place. An example is the recent announcement by Children’s Community Health Plan that that it would be offering policies on the exchange. Children’s already offers Medicaid plans.

One problem likely to be addressed is the high costs faced by people whose incomes are just above 300 percent of the poverty level—thus disqualified from the subsidies. This is the issue that both Bill Clinton and Minnesota Governor Mark Dayton recently addressed. As Clinton points out, one possible solution would be to revive the concept of the “public option” by allowing people to buy into Medicare. These are people who vote and thus likely to get the attention of even Tea Party members of Congress.

Extending the number of states that offer Medicaid to everyone making less than 138 percent of poverty is likely to be a longer slog. The potential beneficiaries are known for not being politically active, so they are easy for politicians to ignore.

To the extent that Republicans have been willing to suggest alternatives to the ACA, they have turned out to be non-solutions. An example is the proposal to allow people to buy health insurance across state lines. The result would lead to insurance companies establishing their base in the state with the weakest regulations and selling insurance nationwide, much as credit card companies are based in South Dakota or incorporations take place in Delaware. It is ironic that those claiming to support states’ rights would desire a solution that would gut state regulation, leaving only federal requirements on health insurance policies.

In a less polarized political environment, adjustments to major legislation like the ACA would be routine. The unwillingness of people like Schneider and Trump to offer either adjustment to the ACA or a viable alternative is both a symptom and a cause of the polarization that makes solving problems so hard.