‘The Royale’, loosely based on life of Jack Johnson, punches home the perils of black success. 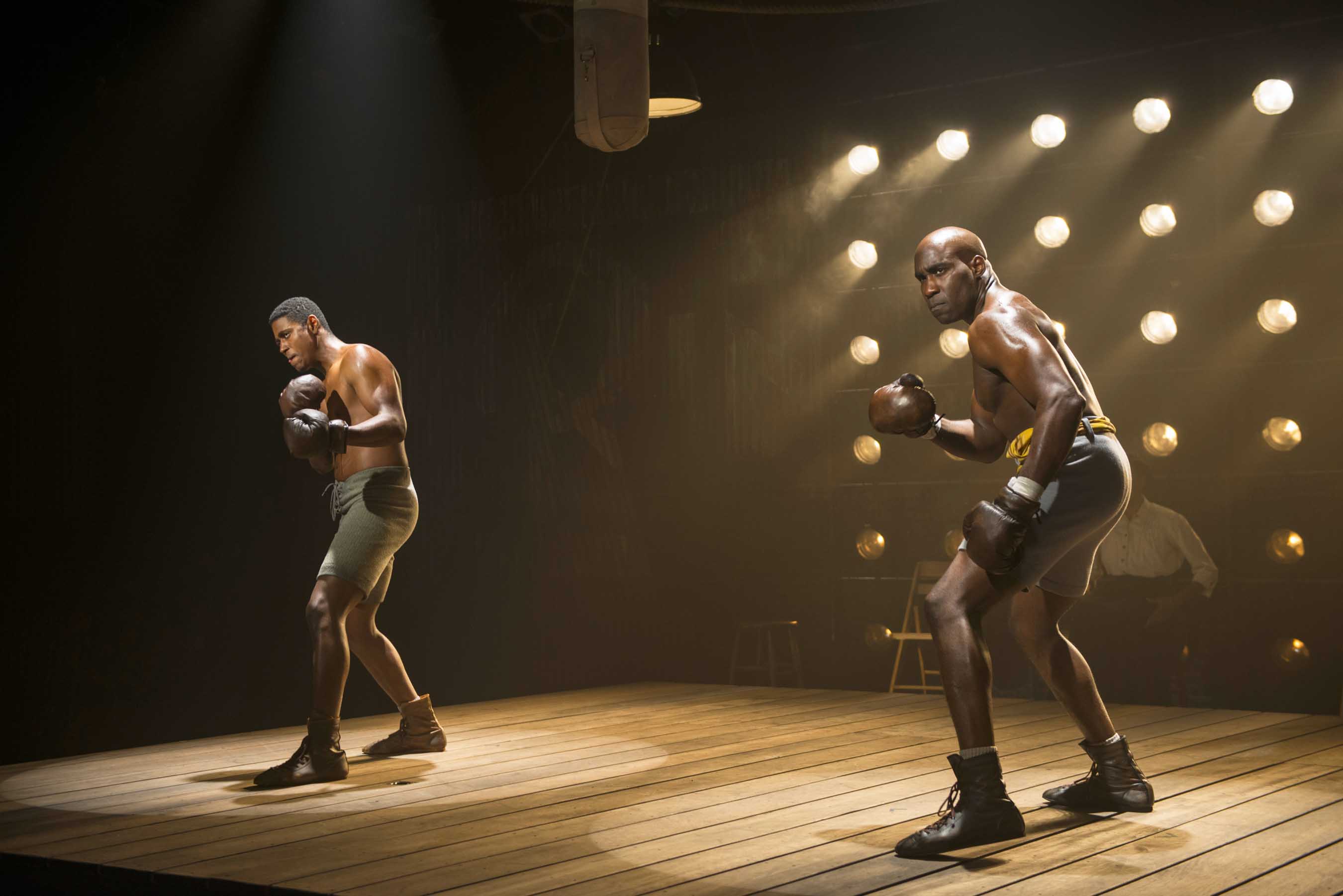 Imagine what it would feel like for the first black heavyweight champion of the world if he knew every blow he landed on the current white god of the sport could cause another race riot. Another lynching. Another black man shot on the street. Another uproar as African Americans pounded at the doors of white privilege.

Finding a way to imagine such internal pressures, without being maudlin or openly political, is the driving force of playwright Marco Ramirez’s The Royale. The result, with surprises in how Ramirez and director Kevin Ramsey make the issue hit home for families even more than society, should send new patrons flocking to the Milwaukee Rep’s Stiemke Studio Theater through Nov. 6.

Centered around the muscular presence and stage command of David St. Louis as Jay (The Sport) Jackson, this is a 75-minute play of such emotional persuasion that it doesn’t feel like it’s hitting us over the head with some kind of message. If there is a message, it transcends color, exploring the motivations and the makeup of champions.

The playwright comes from some of television’s most commanding new forms of melodrama, so the dialogue is serviceably blunt and deftly comic. Here he has found an honest human connectivity to suggest the price paid by every leader who challenges past expectations, in this case in an era of redneck domination that may, for some, bear uncomfortable familiarity with our own.

(That sense of great taste is trivialized for almost a minute when Pachelbel’s Canon – in the cello version made famous on YouTube by Yo-Yo Ma —  is heard while the lights are out for a prop change, reminding what a cliché of theater, TV and movies this music has become.)

Elsewhere director Ramsey demonstrates how theater can body-slam us through our psyche. The staging is deceptively fresh and directly hypnotic – a bare wooden stage and a punching bag to represent the arena, the taping of hands as an interior emotional progression. The boxing matches that open and close the play jab the mind and jolt our bodies through the punctuation of feet, hands, chants and flashing lights.

The audience is more engaged than by an actual fight and mostly drawn to look past the familiar gym conflicts of the plot. St. Louis’ Jackson sounds in his self-confidence more like Muhammad Ali than the original model, but it is fitting stance for the play’s purpose. The actor plays coiled and relaxed, his speech somewhat muffled when coiled and winningly amused when relaxed.

This is loosely inspired by Jack Johnson, by 1910 the first black heavyweight champ whose victories did spawn race riots. But this “Sport” is a different persona than was fictionalized along historical lines in a more famous theater piece of 1967, later a movie, The Great White Hope. That play not only made stars out of its leads (James Earl Jones and Jane Alexander as his white love interest), but started at D.C.’s  Arena stage before heading to Broadway, helping put regional theater on a map it has since never left.

The Royale is not history but a poetic imagination of the fighter’s insides as a racial pioneer, how such selfish audacity inevitably threatens his own life and the lives of many others. So why persist? The pressure to quit in this philosophical sense would be almost unbearable. The strength to persevere may have roots going back to childhood.

St. Louis originated the role in 2013, though the play has apparently grown much tighter and focused in rhythmic creativity and through-line. The Rep has surrounded St. Louis with strong actors because this play rises or falls on exact physical motion, of characters circling each other like boxers in the ring, of rapid dialogue interludes that fly in and out, of holding stage with penetrating looks. 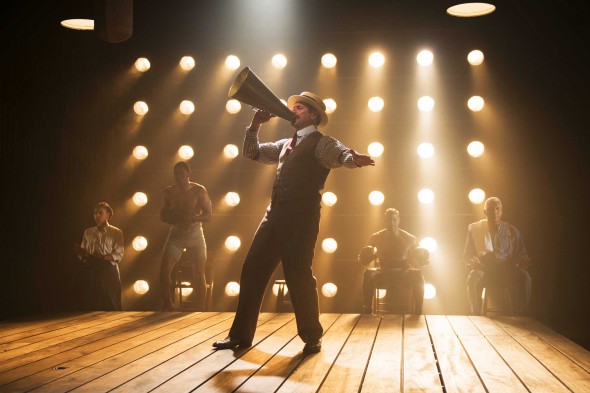 Milwaukee Repertory Theater presents The Royale in the Stiemke Studio from September 30 to November 6, 2016. John Gregorio and cast. Photo by Michael Brosilow.

John Gregorio plays Max, the hard-nosed manager who morphs in this play into audience and ring announcer, bringing an accuracy and improvisatory skill that Ramsey has skillfully staged.

Cedric Turner, who still has to clean up some lines, possesses warmth as the older wiser cornerman. Sade’ E. Moore as Jackson’s prophetic sister makes herself an even match with her brother through body control and acting concentration.

The crowd pleaser and indeed the vehicle of audience self-identification is Xavier Scott Evans as Fish, the knockout victim turned boxing partner and tragic jester, in the play’s most obvious bit of symbolism.

It may partly be the Rep’s own fault that opening night was not packed as expected – particularly for a show that should be the Rep’s sneak hit of the season for its visceral feel and payoff. Customarily this is also a space where designers  — lights, sound, scenic — get to stretch their wings. The open room can be rearranged as needed. Yet only in February will the Stiemke stage another notable offering — Grounded, the one woman play put on last season by New York’s Public Theater, set in the terrain of the modern military.

The Rep has mostly thrived in this underused studio, while other capable theater companies are struggling to find workable stages. 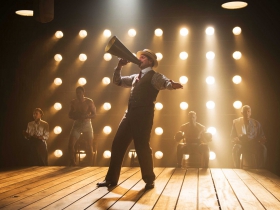 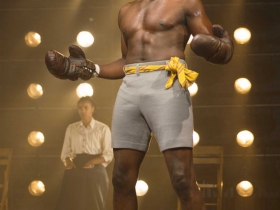 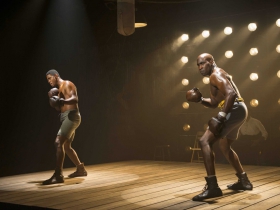 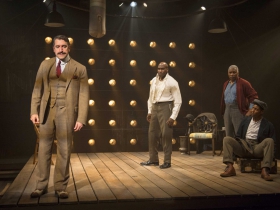 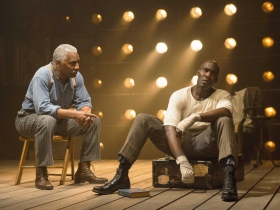 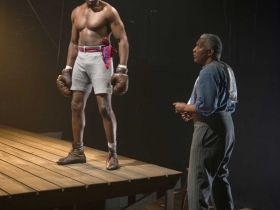