Lovely Sunday, What a Farce 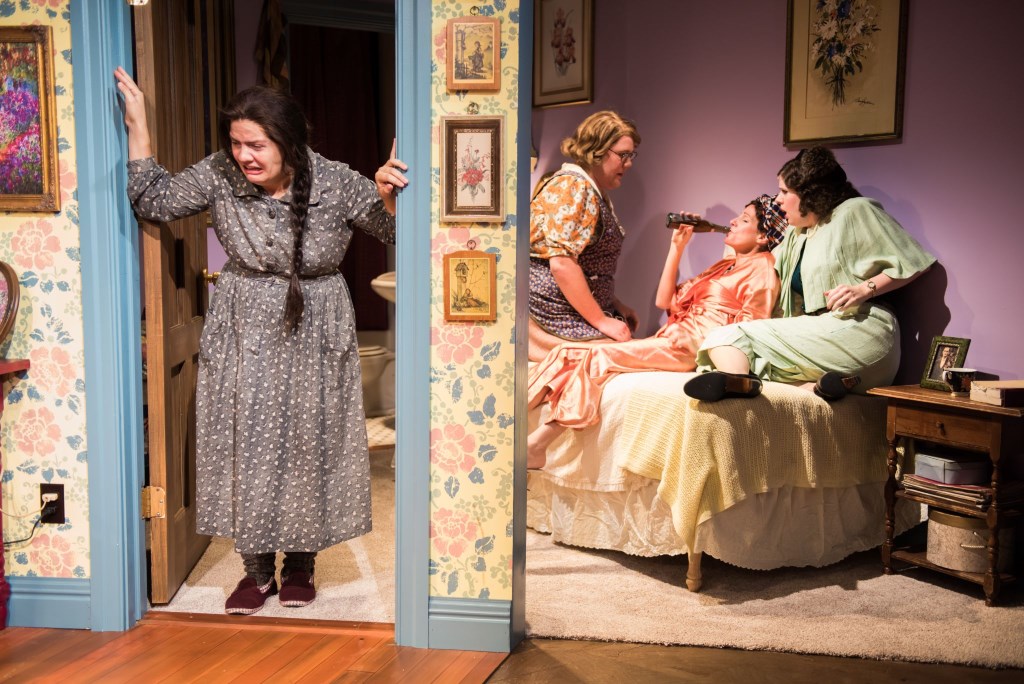 “A Lovely Sunday for Creve Coeur” dates to the troubled, experimental last half of Tennessee Williams’ writing career. But his artistry, ear for dialog and memories remained even as the visions shifted.

This two-act continuous play was worked and reworked in the late 1970s, but Williams did not stoop to copy “The Glass Menagerie,” “A Streetcar Named Desire,” “Cat on a Hot Tin Roof” and other earlier masterworks. He explored themes in novel stylistic ways, sometimes jumping more abruptly into character interactions than the standard three-act play allowed. Past successes gave him the confidence to rely on the deft touch of director and actors to find the silly humanity under the social stereotypes and flesh out, as only theater can, why we laugh and care for troubled and lost souls.

“Lovely Sunday,” at the Milwaukee Chamber Theatre through October 16, could pay off in an exacting sensitive production. The actors are notable or emerging talents of the local theater community. But it is director Leda Hoffman insisting on a near-farce style that goes wrong in reaching too stridently for the laughs over the humanity. I loved an earlier production she directed at the Rep —  but “The Amish Project” involved one eminent secure actor and not the demanding to and fro of four women in a crowded efficiency apartment in 1937.

Kelly Doherty has a big and brassy comedic style that could fit much of the bullnecked determination of Bodey, deaf to any idea other than giving her roommate a romantic picnic with Bodey’s twin brother at Creve Coeur park.

A major wasp in Bodey’s ointment is Molly Rhode’s Helena, whose socialite pretenses and disdain for Bodey’s commonness  mask her own financial designs on the roommate.

Karen Estrada has been uglied up to play the fumbling, German-mumbling, infinitely sad intruder from upstairs named Gluck (think of Miss Gooch in “Auntie Mame”).

The center of all their maneuvers, for reasons that pass understanding until the quartet gets nearer Williams’ purpose in the second act, is Dottie. She is the aptly named, romantically dreaming delusional schoolteacher who believes she has found true love but is heading over a cliff. Kay Allmand plays her at angular full blast, with big gestures and showy delivery, as if in a road company version of  “Summer and Smoke.” Only in the second act do we identify with Dottie’s appeal as the cast draws closer to what the play intended to prepare us for.

Williams could have done more to anchor the characters and plot, strangely borrowing elements from “Streetcar” and his good friend William Inge’s “Picnic.” But the production camps the characters up in voice and manner, pumping past belief the behavior of women bickering. Because of this it is the one-note concentration of Estrada that is the most memorable. It is unusual when the comic foil – the main purpose of her part — draws more sympathy than the bigger roles.

All the actors have opportunity for nearly vaudevillian confusion, but those should be the result of genuine emotion run amuck. Lines that were clearly meant to be throwaways or sharp asides are punctuated and bellowed in fear the audience would otherwise go to sleep. But we already knew this cast had big voices that can climb the scales.

These mannerisms deliver some big laughs but don’t do justice to the quality of exchanges the play can achieve. We should be getting time to empathize with someone. That’s clearly what Williams intended as we learn when self-centered Helena breaks out in musings or when Dottie is sympathetically torn between hiding her feelings or baring them

Technically first-rate, however, the production understands the author’s purpose. Costumes convey the range of commonplace and social pretenders. Sound effects are perfectly attuned. And given the number of dialog references, there is a fifth character in the play – the kitsch apartment, designed by Courtney O’Neill as if a color-blind maniac had opened a Teutonic bric-a-brac emporium.

Despite perfect sightlines, the front of her stage is not used to full effect, which keeps the audience removed from the antics. But the peeks of kitchenette, bedroom and bathroom provide a needed sense of intimacy. If only the characters had played against the backdrop since Williams ends the play with a sly commentary on the shallowness of worrying about where we live. 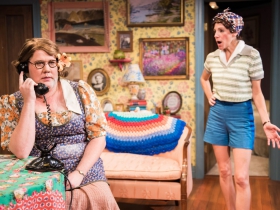 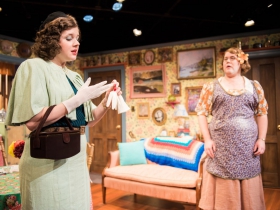 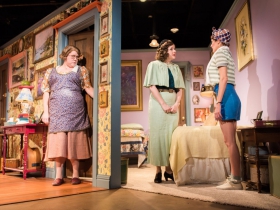 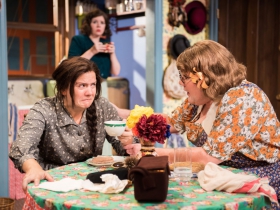 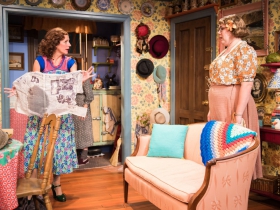 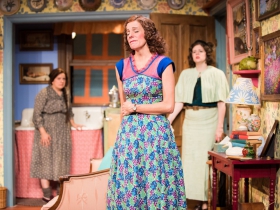