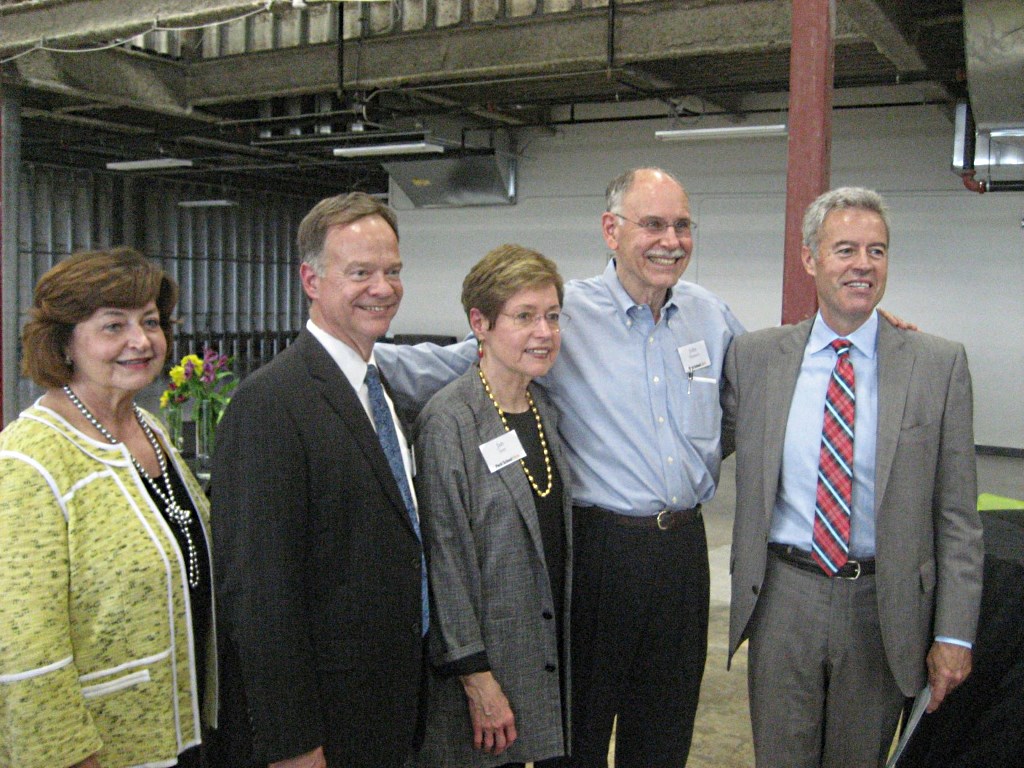 Jan Serr and John Shannon are honored for making a $1 million gift to UWM.

Build-out of a multidisciplinary arts studio on the sixth and top floor of the UWM Kenilworth Square East Building will commence in early 2017 thanks to a $1 million gift from philanthropists John Shannon and Jan Serr, it was announced Tuesday, September 13th.

Fifty officials and invitees gathered for the announcement in the Jan Serr Studio, newly named for the visual artist who was a 1966 graduate of the school, and who received an MFA there in 1968.

Serr’s husband, John Shannon, has recently turned his attention to real estate redevelopment, and operates Caledonia Properties, which is active in the Menomonee Valley.

The couple, who are House Confidential honorees, were on hand to greet the guests in an informal champagne-and-vegan-cake gathering held in the raw space after brief remarks from University officials, including Chancellor Mark Mone.

The steel-framed room occupies a portion of the former roof of the reinforced-concrete 1914 Ford Model T plant at 1915 E. Kenilworth Pl. designed by Albert Kahn, the foremost industrial architect of his day. The floor was added in 2006 when UWM converted the long vacant structure into its Peck School of the Arts in the school’s first-ever public-private real estate venture.

Visitors could wander the space, and many were drawn to the glassy east wall of the room, which has a surpassingly beautiful and encompassing view of Lake Michigan and its fine North Shore. A balcony beckoned beyond. The south wall offers a similar promise of a commanding view of the city, Mone said in an interview with Urban Milwaukee at the event.

But for now, the wall is a blank expanse. However, Mone pointed to one window that had been cut out. It offered a sunset view of Brady Street and beyond — just a glimpse of what might be if a similar glass wall could be constructed there, as on the east.

Right now the wall is a blank canvas for motion picture or video projections, but a drop-down screen would be an easy remedy should the wall go and windows arrive, Mone said. Such improvements would also require an additional round of funding beyond the scope of the Shannon – Serr gift.

The gift announced Tuesday would fund initial renovations to the space, which is finished to what is called “Grey Box” specifications — I-beams are fire-insulated, but exposed; studs are in place, but no drywall has been installed. Plumbing and mechanical equipment are also visible, some of it hanging from the ceiling, 20 feet above.

The concrete floor underfoot, part of the original structure, and likewise unfinished, was built to handle the tremendous heavy live loads of an automobile manufacturing plant.

It will certainly be able to manage whatever rigors it will face when it opens as “a multidisciplinary arts studio … for performances, screenings, exhibitions, filming and the development of projects by all five departments within the Peck School,” according to a press release. The Jan Serr Studio “will serve as a resource for community arts organizations as well.”

“This will be a creative space rather than simply a performance hall,” Serr said. “A studio is a place where people can develop their craft and ideas can grow. The creative process brings people together, and we hope this space will inspire that process.”

The couple will also provide an endowment to support future operations and programming at the studio. The school is still seeking funding for projection equipment, seating, rigging, dressing rooms — and perhaps those glass walls.

This is the fourth $1 million gift to UWM announced since June. It comes in addition to $5 million and a $10 million gifts received by the university in 2015. It comes at a time when state support of the university system has declined. Mone announced a $41 million cut over three years from his budget this spring. The state has frozen tuition, and has effectively put on hold significant capital expenditures such as the long-planned and unfunded replacement for the dysfunctional UWM Union, a structure that, at its best, would be maybe 20 per cent useful.

Furthermore, there has been objection by some, like author Charlie Sykes, that public universities are spending too much money on “megabuildings,” including things like student unions and multidisciplinary performance spaces — proven incubators of independent dialogue and critical thought.

Unfortunately for Mone, he needs the new union, a new Chemistry building, and he has to get some money to do something with the former Columbia Hospital, a huge complex of structures to the west of his campus. And, unlike the Kenilworth Building, which the University bought in 1971, it will not have the luxury of waiting three decades to figure out what to do with the crumbling Columbia. The old hospital is no Model T factory, that’s for sure.

Smaller gifts like those of Shannon and Serr can help fill gaps in the budget for items that university administrators once assumed would be routine appropriations of the legislature.

Although Serr’s degree is in fine arts, she entered UWM as a voice student, so her multidisciplinary creds are of the first order. She and her husband have been longtime supporters of community arts organizations, including the Skylight Music Theater, the Florentine Opera Company, the Milwaukee Art Museum, Early Music Now and Present Music, all of which have embraced multiple art forms into their fold.

Present Music’s Kevin Stalheim was at the event, as was John Schneider. Dean Bob Greenstreet of the UWM School of Architecture and Urban Planning took a look around the room with the practiced eye of one who knows that this space will soon be transformed by somebody who was probably once one of his students. Such a vision greets his eye all the time nowadays when Greenstreet chances to look anywhere on the skyline of Milwaukee. Julilly Kohler was there and engaged in a spirited conversation with the chancellor.

Diane Grace, Director of Major and Planned Giving at the university was there, and optimistic that she will be able to draw benefactors to the school, especially for projects of this nature. Her colleague, Gretchen Miller, Director of Gift Planning and Agreements, was there to endorse those sentiments. Dan Petry, Development Director, Peck School of the Arts, also was in the room. Nowadays it takes a village to raise money for a college.

William Florescu, the General Director of the Florentine Opera Company, whose contract was extended in July, was also in attendance. His company is also embracing the multidisciplinary route, with community engagement, opera residencies, new productions and world premiers. Shannon and Serr have sponsored Florentine recordings of new operas, like Carlisle Floyd‘s Wuthering Heights from 2014.

If you’re just trying to grab a cup of coffee some Sunday at the coffee shop, and a would-be Pavarotti belts out Verdi’s “La donna è mobile,” you have Florescu to thank for Florentine Opera @ Colectivo Cafes.

Also in attendance was Les Weil, a retired executive, and his wife, Jodi Peck. Her father Bernard Peck died last October at 88; the school is named in memory of his parents, Lillian and Milton Peck, and took their name in 1999.

The Pecks were a Milwaukee meatpacking family for a century before selling their business in 1984. The family has a bit of a herding instinct itself, for its generosities include the Peck Courtyard at the Broward Center for the Performing Arts, the Miriam and Bernard Peck Sculpture Terrace in Fort Lauderdale, the Peck Pavilion at the Marcus Center for the Performing Arts, and the Peck Welcome Center at the Milwaukee County Zoo — all of them public gathering places. (The Courtyard in Florida includes a working tavern called “Bernie’s Bar.”)

In an obituary for her father, Jodi Peck said this: “His philosophy was always give to things that brought big smiles to many.” Accordingly, his Milwaukee funeral included clowns.

About the Peck School of the Arts

The Peck School of the Arts is Wisconsin’s only comprehensive visual and performing arts school. Comprised of five departments, including Art & Design, Dance, Film, Music, and Theatre, the Peck School takes great pride in the diversity of ideas and work crafted each day by its alumni, students, and faculty. Peck School students are approaching challenges with innovative thinking, finding sustainable solutions to social challenges, and entering the workforce as entrepreneurs. With more than 350 performances, screenings, and exhibits each year, the Peck School is committed to positively affecting—and engaging—the greater community and the world. 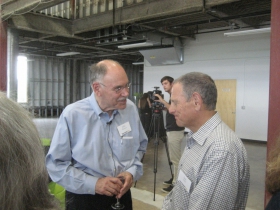 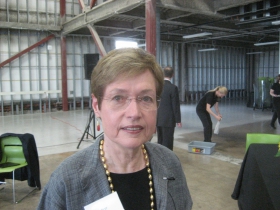 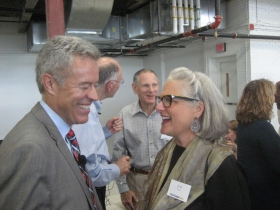 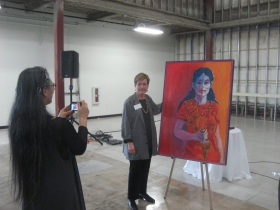 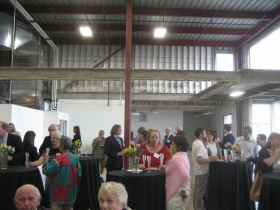 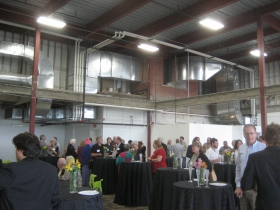 One thought on “Plenty of Horne: Inside New Jan Serr Studio at UWM”