Says he will accept county board committee on Mitchell Park Domes. But will he?

Milwaukee County Executive Chris Abele says he has backed down from his plan to form his own Mitchell Park Domes Advisory Committee. Abele “does not wish to create ‘dueling’ groups or duplicate efforts,” his spokesperson Melissa Baldauff told Urban Milwaukee, and “therefore he is not naming any committee or chair.”

Abele had announced his intent last February to create a hand-picked committee not long before the county board voted to create its own committee. The result was a veritable duel over the Domes committees, as Urban Milwaukee reported last March. But Abele now says he won’t name his own committee and will work with the board’s committee, while continuing to work with GRAEF-USA, the consultant on the Domes hired by his administration to do planning and community engagement.

County Board chair Theo Lipscomb responded positively to Abele’s decision, telling Urban Milwaukee that “after months of discussion and debate, it is real progress to hear that the County Executive ultimately abandoned his plan to enlist a redundant private committee.” Lipscomb added that the board’s 11-member public task force “will be named very soon.” He also said he would “incorporate some of the County Executive’s proposed participants…to ensure that all viewpoints are represented.”

However, it’s far from clear that Abele won’t still have a less-public committee of some kind advising him on the Domes.

Back on March 28, Abele had told a national newsletter, he had “launched a steering committee comprised of stakeholders from the business community, non-profit community, neighborhood groups, and more, that has already begun meeting.” Baldauff later confirmed that Abele’s committee did have a “preliminary meeting.” Having convened it without public notice, the organizers may have violated the Wisconsin Open Meetings Law as Urban Milwaukee reported.

For two months following the April election Lipscomb and Abele had tried to merge the two planned Domes committees. Talks fell apart in June and it appeared that Abele would move forward with his own committee.

Lipscomb emailed Urban Milwaukee on June 23: “After months of negotiation, the Executive last week retreated to his original March position wherein he insisted on a large task force where he would appoint the vast majority of members.” Abele had proposed up to 25 participants.

Claire Zautke, Abele’s community relations director, told a county board committee in June the administration wanted a large committee so that “any constituency that wanted to be included” could be. Lipscomb told that committee, “I’ve been clear that I don’t want to exclude anyone from the process and that people can attend and participate” since all meetings will be open to the public. In a June 13 email to Abele, Lipscomb said, “we also agreed that it was important that…it not appear as if its membership were hand-selected or stacked to reach a pre-determined conclusion.”

The issue seemed to be settled, with Abele’s recent decision to relent, but he still seems intent on having some kind of less-official committee. Baldauff told Urban Milwaukee in an email that “the county executive would still like to meet informally from time to time with the advisory committee he previously convened to review the ongoing work of engaging with the community….we believe their review and feedback would be very valuable.” She added that these individuals “will not be advising on the Domes; they are simply providing input and feedback on the best ways to engage the most people in meaningful and effective ways.” 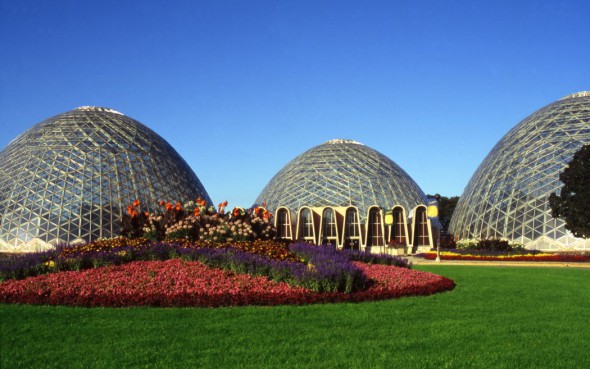 Baldauff contended that since Abele’s group would not be an “official” or compete with the board-created committee, it would not “be subject to open records laws.”

Abele’s position regarding his original committee and open meetings law has remained mysterious. He first convened the group without public notice and his office has repeatedly rebuffed requests for committee member names. An “Advisory Committee Overview” dated May 10, 2016, obtained by Urban Milwaukee lists “Open meetings requirements (Julie Wilson)” as the second agenda item for the committee’s first “official” meeting. Wilson is an assistant corporation counsel for Milwaukee County, according to LinkedIn.

The 2015 Wisconsin Open Meetings Law Compliance Guide explains that a wide variety of groups are covered by the law, including “a citizen’s advisory committee appointed by a county executive.” The guide says “The list of entities is broad enough to include virtually any collective governmental entity, regardless of what it is labeled… Purely advisory bodies are therefore subject to the law, even though they do not possess final decision making power, as long as they are created by constitution, statute, ordinance, rule, or order.” The guide says “the term ‘rule or order’ has been liberally construed to include any directive, formal or informal, creating a body and assigning it duties.”

Abele’s office has contended he is not naming a committee and thus there is no official entity to comply with open meetings law. But Tom Kamenick, deputy counsel for the Wisconsin Institute for Law and Liberty (WILL), told Urban Milwaukee “it seems like the county executive is trying to get around the open meetings law by disbanding a committee only to reconvene it and call it something else.” The WILL attorney added that “it’s ironic that he wants to keep the public from knowing about the work of citizens intentionally gathered to provide input about community engagement. Why would you lock the public out of these meetings?”

Kamenick noted there are “gray areas” about what constitutes a governmental entity: “It has to be a defined body with consistent members” rather than different people all the time. However, he said, officials cannot just “get around the law” by saying things like “the committee only meets informally” or that “it’s just an ad-hoc group.” He said a group created “hierarchically,” from the “top-down” is more likely to be construed as a governmental entity even without an official name, and it appears Abele’s group fits that description. WILL has filed numerous lawsuits involving alleged violations of the open meetings laws and has sometimes prevailed.

Urban Milwaukee has been given a list of individuals who had accepted appointments to Abele’s planned committee as of July 15. The roster was shared by Preserve Our Parks president John Lunz, who obtained it through a Freedom of Information Act request. Lipscomb had also shared with Urban Milwaukee names proposed by Abele’s office in June for a merged committee. The lists matched except Lipscomb’s included two county supervisors.

The roster provided by Abele aide Roberta Drews to Lunz had the hand-written word “Accepted.” It indicated others would be named, including a Milwaukee County Parks Commission representative and three more “community members.” A hand-written note listed three possible organizations to fill those slots: “Af.-Am. WI Chamber of Com., Urban League and MKE Bucks!”

Lipscomb and county board members tend to favor repair and restoration of the Domes, while Abele has been willing to consider the option of replacing the Domes with some other creation. Whatever advisers or committee members are chosen could have a significant impact on that discussion.

Update 5:25 p.m. August 19: The county board has released the names of the Domes Task Force. The committee makeup includes several specified Milwaukee County officials as well as designated representatives from the community.