Which Candidates Lie the Most?

Aggregating the Politifact ratings of candidates for president and U.S. Senate.

The Milwaukee Journal Sentinel is one of a number of newspapers that fact-checks statements by politicians. Under the PolitiFact title these papers rate the statements on a scale ranging from “True” to “Pants on Fire.” What do these ratings tell us about the people currently running for President and for the U.S. Senate from Wisconsin?

PolitiFact has a web page with links to every organization whose claims have been fact checked. The chart below shows the tabulation for the five people who were still active candidates for their party’s presidential nomination in the April Wisconsin presidential primary: Donald Trump, Ted Cruz, and John Kasich for the Republican nomination and Bernie Sanders and Hillary Clinton for the Democratic. 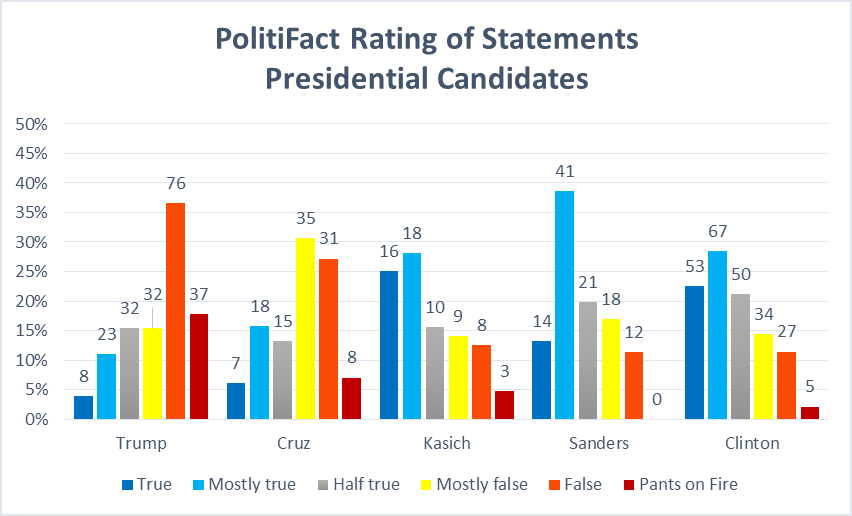 The heights of the bars—and the left-hand scale–show the percentage of a candidates statements that fell into each category: true, mostly true, half true, mostly false, false, and pants on fire. The numbers above the bars show the actual counts for each candidate examined by PolitiFact. For instance Trump made 76 statements rated false, while Sanders had the most statements (41) rated mostly true. Clinton had the most total fact checks (236), followed by Trump (208).

It is worth noting that this does not represent a randomly chosen sample of a candidate’s claims, so that normal statistical tests do not apply. Instead, it is what is called a “judgment” sample; someone is making a judgment in selecting the statements to be checked. Presumably the PolitiFact staff would be looking for statements that seem untrue or at least are not obviously true, biasing the results in the direction of untrue statements.

Also PolitiFact does too little, in my view, to separate deliberate lies from inadvertent misstatements. Are they repeated even after their falsity is pointed out? Is the campaign willing to give supporting evidence? Recently, for instance, Vice President Joe Biden accused Trump of wanting to “carpet bomb” ISIS, but that statement had actually been made by Cruz.

And sometimes, PolitFact, in my view, misfires in its ratings.

Despite these limitations, the distribution can be used to get an idea of a candidate’s willingness to lie or stretch the truth. On the chart above, one can get an idea of a candidate’s concern for truth by noting where the peak bar falls. Falling on the right suggests that truth is not a priority for the candidate. Notably over half of Trump’s statements were rated false or pants on fire. By comparison, Kasich, Sanders, and Clinton all have peaks on the left.

To further quantify the results, I added the percentages of statements rated true or mostly true. They are shown in blue on the chart below. Similarly the total percentages rated false, mostly false, or pants on fire are shown in orange. Those rated half true were assigned to neither category. The line (and the scale on the right) shows the ratio of the two categories. 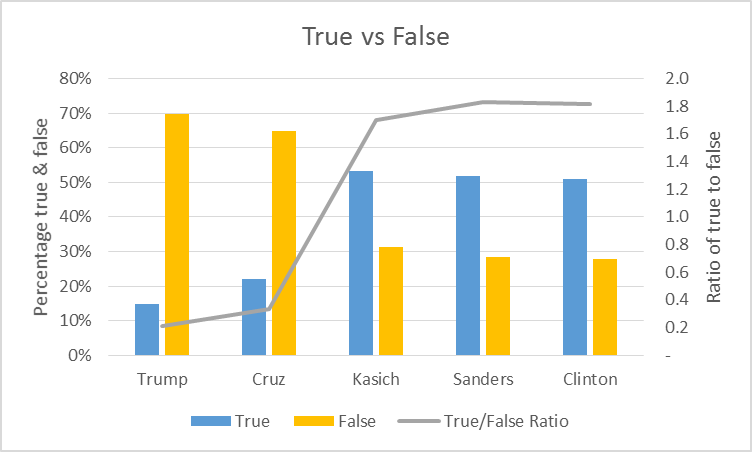 This evaluation puts the candidates into two categories: those who mainly tell the truth (Clinton, Sanders, and Kasich) and those more prone to falsehoods (Trump and Cruz). Compared to Trump (about 14 percent of statements were true), more of Cruz’ statements (about 22 percent false) had an element of truth.

Finally I converted the ratings into numbers on a scale of 0 to 5, where 0 represents pants on fire and 5 true and calculated the weighted average. Again, there is not a notable difference between Kasich, Sanders, and Clinton, while Trump rates at the bottom. 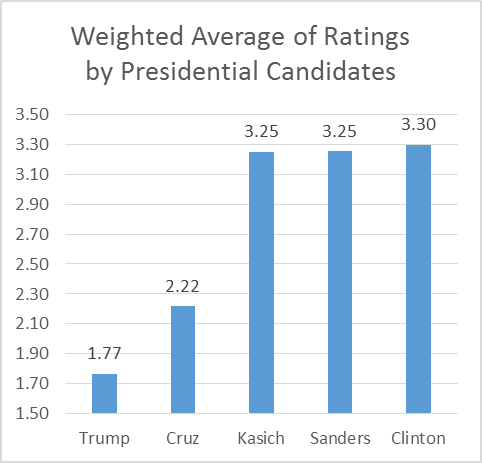 The Washington Post also does fact checking under the FactChecker label and awards up to four “Pinocchios” based on how untrue the statement is. So far, it appears the Post does not have a location similar to PolitiFact’s that tabulates the results. However, it does have this summary of Trump’s statements:

As of July 14, 64 percent (35 of 55) of our rulings of his statements turned out to be Four Pinocchios, our worst rating. By contrast, most politicians tend to earn Four Pinocchios 10 to 20 percent of the time. (Moreover, most of the remaining ratings for Trump are Three Pinocchios.)

At least when it comes to Trump’s lack of trustworthiness, the Post is consistent with PolitiFact.

These results raise the obvious question. If Clinton’s trustworthiness is roughly equivalent to that of Sanders and Kasich—and, as we shall see, Barack Obama–why do polls show so many voters distrusting her? In the latest Marquette Poll, only one-third of respondents (32 percent) describe her as honest, about the same as Trump (33 percent).

Part of the explanation, I think, is she has been under national scrutiny, and attack, for a long time, at least since 1992 when her husband was elected president. As early as 1993 as respectable a publication as the editorial page of the Wall Street Journal was suggesting that she had a role in the murder of Vince Foster or was connected in some way to drug smuggling at a small Arkansas airport. Trump has recently revived the first charge; we can probably expect the second to rear its head.

The very nastiness of the attacks on her may have made her less open and more defensive. This in turn may help explain at least one of “unforced errors,” the decision to set up a private email server.

A second factor is that there is a pattern of people being overwhelmingly popular—and a cinch to win elective office—until they run for public office. The graph below (from Huffington Pollster) shows her favorability ratings since 2009 when she first became Secretary of State. So long as she held that position she was tremendously popular. By the end of 2009 she was far more popular than the man who hired her and stayed that way until she quit and prepared to run for president. Her approval then tanked. 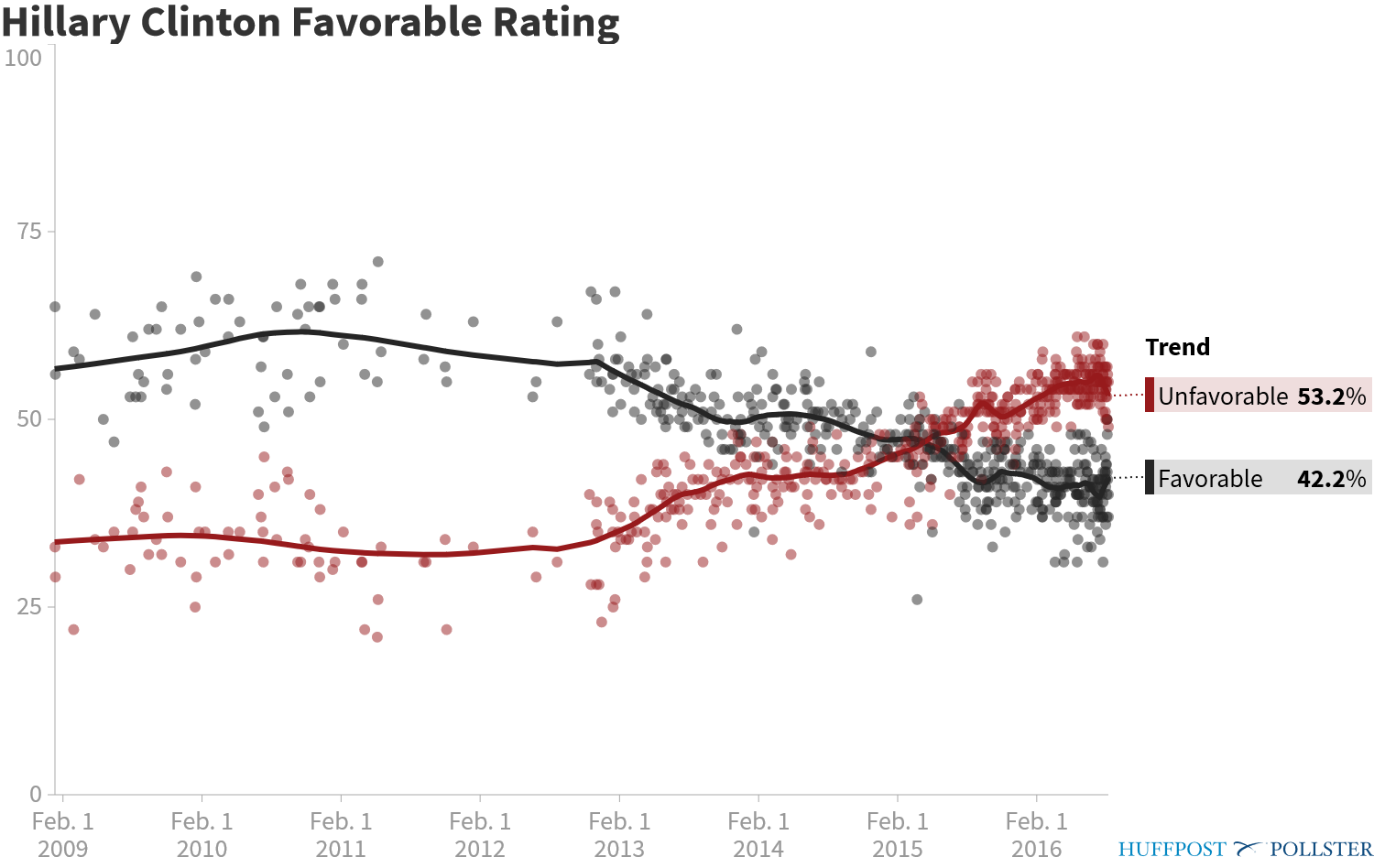 In addition to the presidential election in November, Wisconsin voters will be electing people to other offices. The chart below shows the distribution of Politifact’s ratings of statements by the two candidates for US Senate, Ron Johnson and Russ Feingold. The number of ratings is much smaller than for the presidential candidates, particularly for Feingold who only has 13. 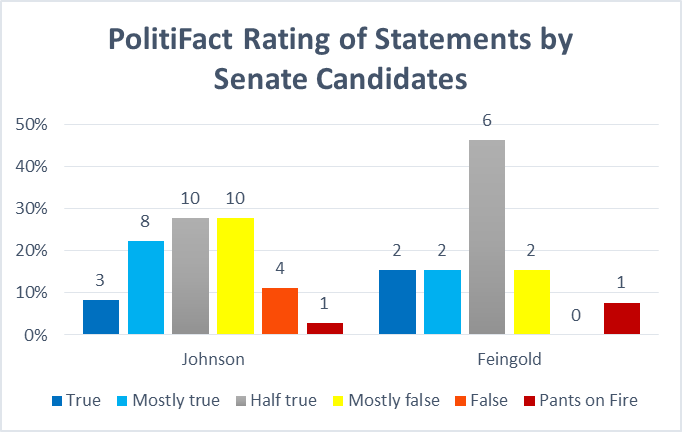 That said, Feingold ranks slightly ahead (each has one pants on fire) with 77 percent at least half true, versus 58 percent for Johnson. The weighted average below shows Johnson does significantly better than either Trump or Cruz, while Feingold does better than Johnson but fall short of Clinton or Sanders. Again, the limited number of ratings makes any conclusion less solid. 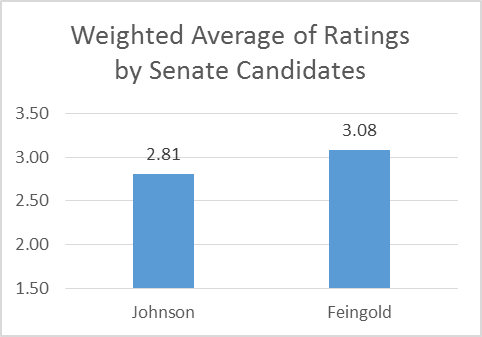 Finally, the next chart shows the ratings for three people in the public eye: Scott Walker, Paul Ryan, and Barack Obama. Ryan is the only Wisconsin representative with a national presence sufficient to accumulate statement ratings from both the local and the national PolitiFact. 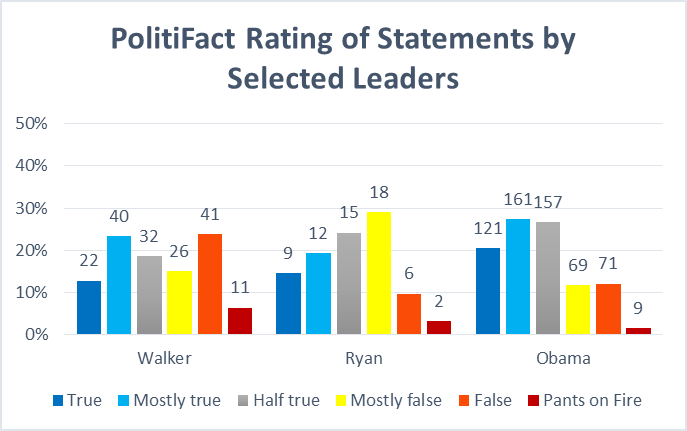 Obama’s overall rating distribution looks quite similar to Clinton’s (shown in the first graph). This is confirmed in the chart below, showing the weighted average of ratings for the same three individuals, with Walker ranking as least truthful of the three.

Ryan, despite his reputation for thoughtfulness, peaks with statements rated mostly false.

In my experience Walker’s specialty is a claim that is technically true but does not support the conclusion he makes. A recent example is his claim at the Republican convention that the success of his policies is reflected in the fact that Wisconsin had the highest number of jobs ever. The trouble with that claim is that most other states are also enjoying record employment. 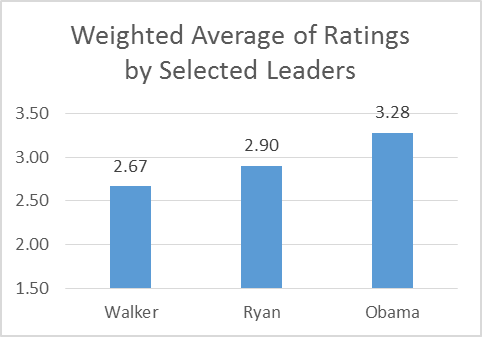 Or at least, why don’t the betrayed supporters turn to neutral sources of information, ones that are more concerned about their reputation than about pushing a particular point of view? In Ronald Reagan’s phrase, why don’t they learn to “trust, but verify”?

A recent Washington Post article summarizing research on human behavior offers an explanation. It paints a depressing picture on this issue. People suffer from “confirmation bias”: they filter out information that fits their preconceived beliefs. The result is that offering information that refutes a belief can actually strengthen the belief.

19 thoughts on “Data Wonk: Which Candidates Lie the Most?”