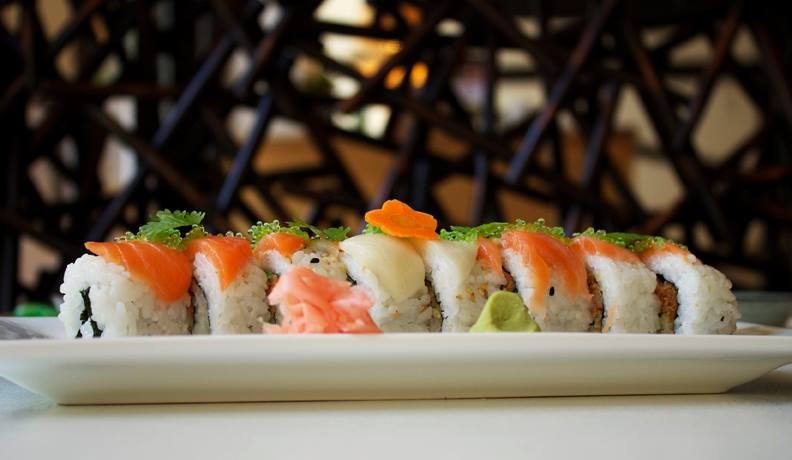 Once the home of Puente’s Barber Shop, 2349 S. Kinnickinnic Ave. in Bay View will now be the new home for Sushi Yuki. Clarence Morse of Brew City Contractors, who helped the building’s owners find a new tenant, has confirmed the new restaurant will serve sushi. Lori Fredrich of OnMilwaukee.com writes:

Morse notes that the timeline for the restaurant is still pending, since they are uncertain about whether they will remodel the building or tear it down and replace it with new construction.

The tentative name of the new restaurant is Sushi Yuki, which means “sushi happiness.” The venue will be operated by Jin San Koh and Sung Hee Kim, according to city assessment records. Koh and Kim also own Sakura Japan Sushi & Grill in Waukesha. They also formerly operated Osaka Japan on Milwaukee’s East Side.

The second location of Shawarma House will open this fall at 17385 W. Bluemound Dr. in Brookfield. The Middle Eastern restaurant has operated successfully for two years on Milwaukee’s Eastside (2921 N. Oakland Ave.). Here are more details from a recent press release:

Shawarma House is a casual dining Levantine restaurant that integrates the succulent taste of Kabobs and Shawarma with fast paced service that can meet all needs whether they are for your 30-minute lunch break or your weekly family dinner. The go-to item for the vast majority of first-time customers is the Chicken Shawarma sandwich, and it is a must to get it on the Shrak pita. Although, if you’re in the mood for savory Kabobs, Basmati rice, Hummus and Falafel then the All Inn Grill is the entrée for you.

Shawarma House started from a simple idea shared by brothers of the Saed Family that transformed into passion to introduce authentic Middle Eastern food to anyone who walked through their doors… Their motto: The preparation is an art, The food is exquisite, The Service is Phenomenal.

Francisco Sanchez and Ruben Piirainen will open a new restaurant – Sabrosa Café and Gallery – at 3216 S. Howell Ave. in Bay View. The new venue will open by spring 2017 and operate on weekdays from 7:30 a.m. – 3 p.m. for breakfast and lunch, and will serve brunch on weekends. Sanchez is the former chef of Bay View’s Taqueria Azteca. A press release offered more details:

Sanchez said the building will be restored to highlight the cream city brick used in its original construction, and an outdoor patio will also be created. Mr. Piirainen, a pianist for the Florentine Opera, will perform classical music for brunch, art events and special events at the location once it’s open…

“We will be working hard to create a chef-driven breakfast and lunch menu that Bay View residents and customers from near and far will want to enjoy,” said Mr. Sanchez.

A new restaurant named Wall Street Drink Exchange will be open on Aug. 8 in Elm Grove at 890 Elm Grove Rd., in the former home of Rewined Modern American Grill. Wall Street Drink Exchange will be open Monday through Thursday 11 a.m. to 9 p.m., Friday and Saturday from 11 a.m. to 10 p.m. and Sundays from 10 a.m. to 8 p.m. Myren Grosenick is working on opening the restaurant and wants to give Elm Grove a small taste of New York City. Fredrich highlights the menu:

Chef Ricky Garcia, whose experience includes work at HoM Wood-fired Grill in Brookfield, as well as the Villa at Heaven City, will head up the kitchen.

“My style is really very simple, fresh,” he says. “I love creating dishes with just a few quality ingredients. So this concept is really based on fresh, farm-to-table dishes … classics with a twist.”

A lunch menu offers up many of the same options as the dinner menu, with a larger selection of sandwiches, including a vegetable pita with pickled onions, peppers, tomatoes, broccoli, spinach, cucumbers, lettuce and avocado aioli for $9, and a classic Reuben ($10).

Ginger in Walker’s Point (235 S. 2nd St.) is now closed. A new Jamaican-style restaurant will be opening at the vacant location under the ownership of Adriel and Kamonte McFarlene. Fredrich adds more:

Adriel McFarlane confirmed intentions to take over the Ginger space this afternoon, indicating that the proposed restaurant would serve Caribbean food. However, she declined to provide further details…

The license application does indicate the desire to host live entertainment in the venue (instrumental musicians, bands and DJs). It also lists hours that would be consistent with both lunch and dinner service.

Ginger, which opened in 2008, was owned and operated by Rose Billingsley and Julia LaLoggia, who also operated Stonefly Brewing Company in Riverwest. Former tenants of the space included Barossa, a restaurant LaLoggia operated with partner Deanne Wecker, and the Dish nightclub.

After a Facebook post this week, Pepi’s Place at 1330 E. Brady St. announced it has closed. The pizza shop opened on the East Side last February, but soon figured out Brady Street was not a fitting location, according to the restaurant’s Facebook post. Fredrich details Pepi’s future plans:

Prior to the restaurant’s move to Brady Street, Pepi’s was a longtime tenant of a South Side space at 3929 S. Howell Ave., where it served up carryout pizza, as well as sub sandwiches and wings.

Pepi’s will continue to offer its frozen pizzas for purchase at a variety of venues around town. See its Pepi’s Frozen Pizza page on Facebook for more details. In addition, beginning this September, frozen pizzas will also be available for pick-up from a shop at 4300 W. Forest Home Ave.