Demands for accountability at listening session of county Office of African American Affairs.

By Jabril Faraj, Milwaukee Neighborhood News Service - Jul 22nd, 2016 11:20 am
Get a daily rundown of the top stories on Urban Milwaukee 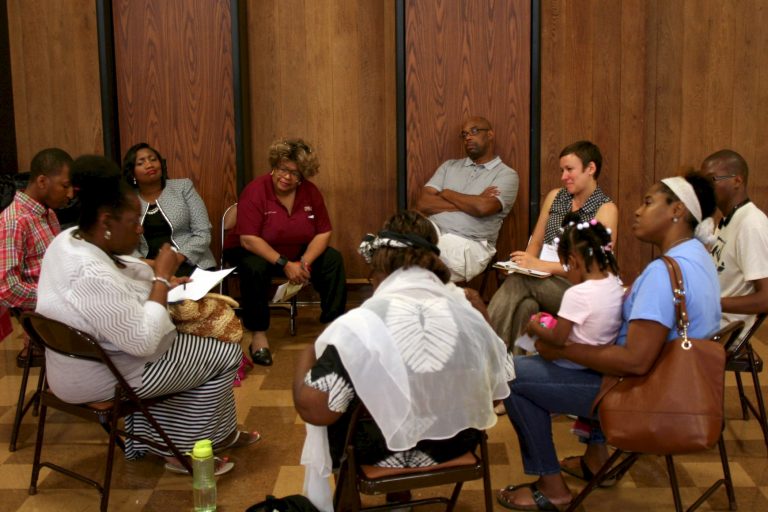 Rosie Caradine-Lewis’ 16-year-old son had just gotten a brand new car — a gift from his parents for doing well in school. That day in the late 1980s, his father encouraged him to take it around the block near their home on North 12th Street and Capitol Drive. Seconds after leaving, the boy was pulled over.

“He didn’t ask him nothing,” said Caradine-Lewis, referring to the officer. “He got out of the car, came straight up to him, my son rolled the window down … he put his gun to his temple and said, ‘Nigger, if you say one word, I will blow your brains out.’ Yes, he said that. And my son said he just stood there shaking, but he didn’t say nothing.”

The family reported the incident at the District 5 police station, but Caradine-Lewis said her son was so scared he begged his parents not to file a complaint and rode the city bus to school instead of driving the car. “He left Milwaukee because of that,” she said.

Caradine-Lewis’ story was one of many shared by black residents during a recent listening session on police-community relations convened by the Milwaukee County Office on African American Affairs (OAAA).

“I just think it’s needed right now,” said Nate Holton, deputy chief of staff for County Executive Chris Abele. “This is an outlet for folks; it’s also an opportunity to get some input to figure out what we can do to improve the situation.”

The event, which was held at the Washington Park Senior Center, was originally scheduled to update community members on the county’s progress in expanding workforce development efforts, but the focus was changed at the last minute after the shootings of two black men — Alton Sterling in Baton Rouge and Philando Castile in Minneapolis — by police the week before. Following those shootings, five Dallas police officers were killed by a gunman and three law enforcement officers are dead in Baton Rouge after a shootout with an African-American ex-Marine. 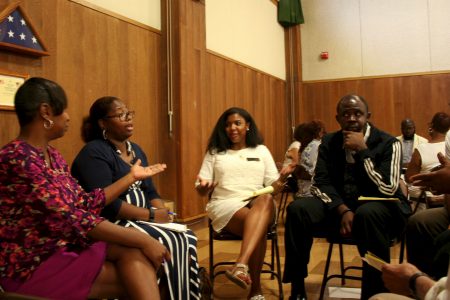 Seth Bratcher (right) looks on while other attendees speak. Photo by Jabril Faraj.

In 2014 Dontre Hamilton, an unarmed black man with a history of mental illness was shot 14 times by a Milwaukee police officer at Red Arrow Park downtown. The officer involved was not indicted, but was fired for not following procedure.

Holton said the feedback from the listening session would be used for planning. The discussion, which was facilitated by the Frank Zeidler Center for Public Discussion, will be compiled into a report, without identifying individuals. The Zeidler model encourages people to speak from personal experience and to listen deeply to each other; the organization has also held listening circles between police and residents in Harambee, Metcalfe Park and Amani.

About 50 people attended the event, but Harambee resident Vanessa White said many of the accounts were eerily similar, even across generations.

According to Jamila Benson, her 19-year-old son, who attended Nicolet High School, often gets pulled over when he’s with friends on Milwaukee’s east side. She said he gets stopped by police almost every time he drives the family’s black Honda; when she gives him her Lexus, he doesn’t have trouble. Benson said after the officers find out he’s “not a bad kid” they let him go without issuing a ticket.

She tells him to have his wallet out, so he doesn’t have to reach for it if he gets stopped, and to always have a plan for where he’s going. “I’m worried every time he walks out the door,” Benson said. “He could get pulled over and misunderstood. And, that happens all the time.”

Bratcher has a clean record but still said it’s “very concerning” dealing with the police, as a black man. He said the incidents around the country frighten him. “It’s to the point where … if I see a police car following me … I’ll turn off the street because just a simple traffic stop could lead to my death.”

Lois Redic, a retired 25-year employee of the Milwaukee Public Library, agreed that African-American men are feared and don’t get treated fairly. She said police officers need to be more accountable after controversial shootings. Bratcher said diversity at all levels of the criminal justice system, from prosecutors to juries, could be a step in the right direction.

Between 2008 and 2012, more than 50 people sued the City of Milwaukee and Milwaukee Police Department alleging improper strip and cavity searches violated their civil rights. One officer pled no contest to eight charges and served a 26-month prison sentence; at least five other officers were forced to resign, but did not serve jail time. The alleged civil rights violations occurred in District 5. About half of the district is in the 53206 ZIP code, which is Milwaukee’s poorest and is almost exclusively African-American.

Bratcher also said police should live in the communities they are policing. “If they could really live in these communities and see, hey, there’s good people here — hardworking people — then maybe that might be a little different.”

In June, the Wisconsin Supreme Court said Milwaukee could no longer enforce a citywide police and firefighter residency rule that had been in place for more than 75 years.

Holton, who is black and has a brother in law enforcement, acknowledged that everyone has racial bias and said problems with policing are symptoms of larger issues involving race and equality.

“If you’re talking about actually bending the curve on a large scale in Milwaukee County when it comes to our racial issues, we have to do something that’s different,” he said.

“We’re talking — that’s good,” said Bohannon. “Now, it should make each person ask themselves: ‘What are you going to do to be a part of the change?’ Because each and every one of us play a part.”

Zeidler Center Executive Director Katherine Wilson said it’s important that police see residents as human, and vice versa. She said building trust is the key. “It’s so slow, and it’s so hard, and it takes so much time, but it’s the one thing that I’ve seen that works.”

Holton said he understands why elected officials haven’t concentrated on these issues, but it’s time for that to change. He added that the solution isn’t going to happen overnight, but OAAA is committed to a long-term strategy.

“We’re going to be accountable and we’re saying that we’re going to hold elected officials accountable,” said Vanessa White. “We have to begin to say to the systems that are broken, ‘We’re not going to participate.’”