How to Fix Medicaid

The costs of the state’s Medicaid program are “unsustainable,” as Republican officials have told Urban Milwaukee columnist Steven Walters. As a result, there are proposals to redesign the long-term care portions of the state Medicaid program which probably won’t surface until after the November election, due to fears about the possible political fallout.

The proposal to change Medicaid has already generated concern from families and individuals in the program and their advocates who fear they will get reduced coverage. Meanwhile, none of these Republican leaders has mentioned the lowest-hanging fruit for the Medicaid program: accepting federal funds to expand the program under the Affordable Care Act (or Obamacare) something Gov. Scott Walker has resolutely refused to do. What is the impact for taxpayers of the various options? Let’s crunch the numbers.

Medicare does not cover the costs of long-term medical care. Instead, people whose income and assets fall below a certain level can get services through a variety of Medicaid programs. Collectively these are often referred to as “family care.” A May 2016 report from the Legislative Fiscal Bureau (LFB) compared the projected costs of the present long-term care programs with those of revisions proposed in a “concept paper” from the Wisconsin Department of Health Services. The LFB projected the savings shown in the graph below in the first six years after implementation of the concept paper proposal. 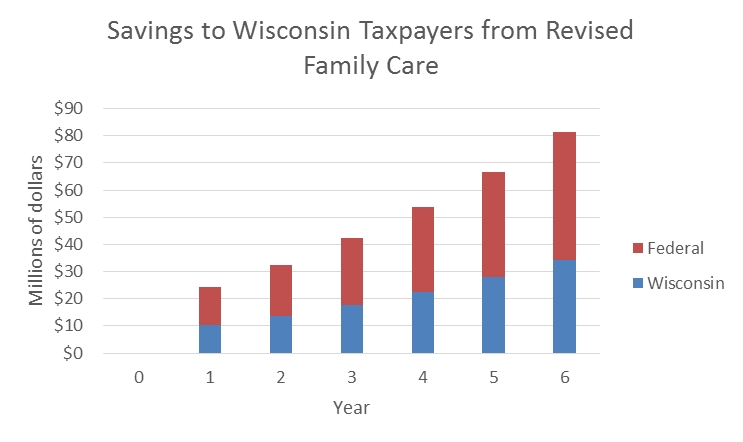 Wisconsin taxpayers pay about 42 percent of the cost of these programs. The remaining 58 percent is picked up by federal government. This ratio applies to all Medicaid programs that existed before implementation of the Affordable Care Act.

The changes proposed in the concept paper would be phased in over six years. At the end of that period, according to the LFB, they would save $80 million. About $35 million of the savings would go to Wisconsin.

The cost of not expanding Medicaid

The Affordable Care Act expanded Medicaid to all adults under age 65 whose income was 133 percent of the poverty level or less. The federal government would pick up all the costs of the expansion to newly eligible groups. Starting next year, the federal share will gradually decline, falling to 90 percent in 2020 and thereafter. A U.S. Supreme Court decision made state participation voluntary.

Rather than adopt the expansion and accept the additional aid, Wisconsin responded by opening Medicaid to everyone whose income was less than 100 percent of poverty and had previously been excluded by an enrollment cap. These were mainly adults without children.

At the same time, those making more than the poverty line were removed from Medicaid. The assumption was that they could purchase health care insurance policies through another provision of the ACA—the newly-established exchanges in the federal Marketplace. The Marketplace offered federal subsidies towards the purchase of health care insurance policies to people with income between 100 percent and 400 percent of the federal poverty level.

Several Legislative Fiscal Bureau reports estimated the savings if Wisconsin had adopted the expansion of Medicare offered by the Affordable Care Act. The chart below incorporates the estimates from several of these reports. 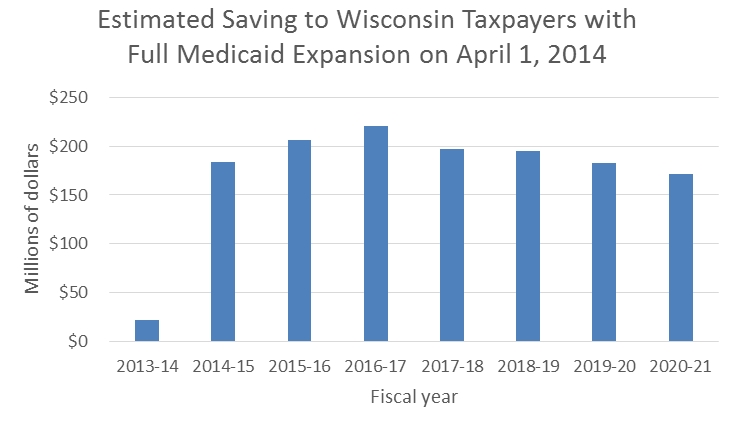 The LFB reports a decline in recent enrollment, perhaps reflecting an improved economy. Yet even with this and with the decline in federal subsidy to 90 percent, the projected annual saving to state taxpayers of expanding Medicaid exceeds $170 million. This is far more than the estimated saving of $35 million from redesigning family care.

What about the federal taxpayer?

The saving to Wisconsin taxpayers from expanding Medicaid results largely from the federal government picking up all or, eventually, 90 percent of the cost rather than 58 percent of the cost. Is this an example of taking money from one pocket (federal taxpayers) and putting in another (state taxpayers)?

Analyzing the net cost to federal taxpayers is complicated. It depends on what the people no longer covered by Medicaid decide to do. Theoretically they would go on the federal exchange and take advantage of the subsidy there.

Consider a household of two adults with a total income of $20,000. This puts them at 126 percent of the federal poverty level. According to a calculator available from the Henry J. Kaiser Foundation, if they lived in Milwaukee they could buy a “Silver” plan that cost $6,116 per year. Of that the federal government would give a subsidy of $5,707, leaving them to pay $406 annually or $34 monthly.

For the individual, being on an exchange plan has pluses and minuses. On the plus side, the individual may have a wider selection of doctors and other providers, due to the higher provider payments in commercial insurance than in Medicaid. On the minus side policies purchased on the exchanges have co-pays which may make the individual reluctant to get treatment. By comparison, Medicaid services are free.

But what about the relative impact for taxpayers? While the LFB report does not state what cost per person it used for expanded Medicaid, this number can be calculated from the report’s data. It projects that 36,000 additional people would be on Medicaid with full expansion increasing cost by $130 million. This gives a per-person cost of $3,600. This is well below the subsidy of $5,707 on the federal exchange, meaning a savings for federal taxpayers as well had Walker accepted the expansion money.

Some of these recipients may have decided to go without insurance. That would result in a short-run saving to the federal taxpayer but undermine the goal of universal coverage. It could also result in higher long-term costs if health problems were left untreated until they could no longer be ignored.

How is it possible that expansion of Wisconsin’s Medicaid program could have saved federal taxpayers money even as the coverage was expanded? This is largely because Medicaid is much cheaper than the private insurance in the marketplace, due to Medicaid’s lower limits on payments to healthcare providers.

All in all, the potential for savings by accepting the federal aid that comes with expanding Medicaid expansion dwarfs any savings gained by tweaking and potentially cutting the state’s Medicaid program, which Republicans are now considering. Walker has since 2012 argued that he won’t accept the federal expansion money because the Affordable Care Act could someday be cut back. That could happen some day though it seems increasingly unlikely, and the soonest that could happen is in 2017. By then, state taxpayers would have paid $170 million extra annually for five years.

2 thoughts on “Data Wonk: How to Fix Medicaid”