Located in Whitefish Bay, it was served by rail and steamboat from downtown Milwaukee. 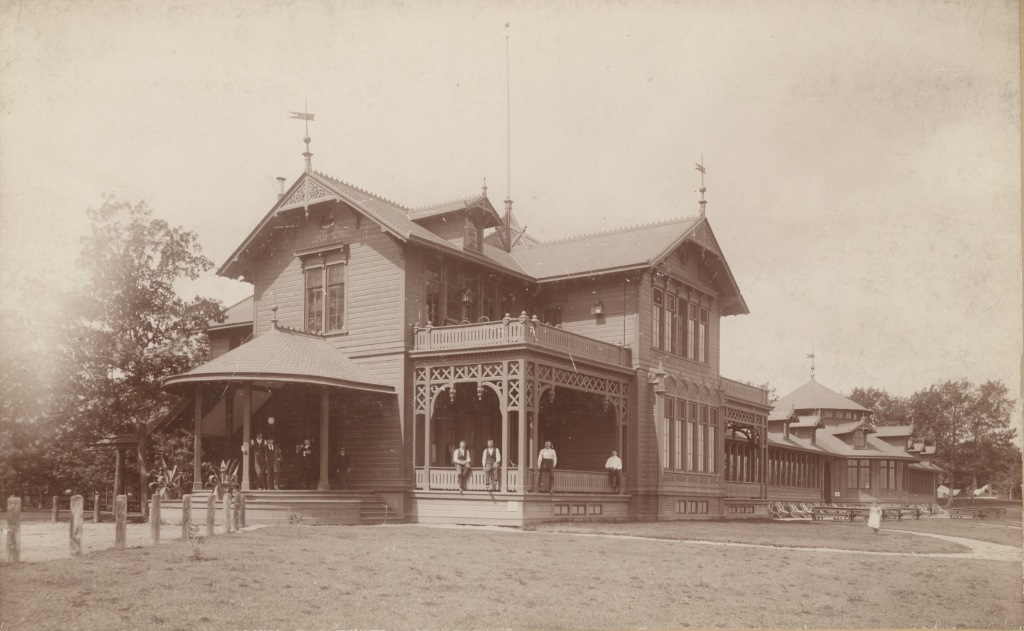 After the completion of the Lake Avenue Turnpike in 1872 Whitefish Bay would become a popular summer destination for a quick escape from Milwaukee. A few small resorts would develop but it would not be until the late 1880s that things really began to take off. This would be thanks to the efforts of Frederick Isenring who would assemble a very choice parcel of land with fine Lake Michigan frontage. Also, in 1886 Guido Pfister (later of Pfister Hotel fame) and others would build the “dummy line,” a rail line from Milwaukee to the resort area that looked like an ordinary streetcar (they were horse-drawn at that time), but was powered with a small steam engine.

The Pabst Brewery took note and in 1888 purchased the land from Isenring and would build a grand resort, the Pabst Whitefish Bay Resort. Isenring would manage it for some years. This is a view from 1890 of the resort’s “bellevue,” which was its main structure perched on top of the lake bluff. In addition to the “dummy line,” the resort was served by steamboat from downtown Milwaukee to a dock on the lake in Whitefish Bay. There were extensive walkways on the bluff and in the early 1890s one of the first ferris wheels in the U.S. would be constructed just to the north of this building.

But the resort lasted a relatively short time. In 1915 it was demolished and the property subdivided. Soon after this Schlitz heir Herman Uihlein would purchase the choicest parcel, building an imposing mansion which stills remains a landmark along this stretch of Lake Dr.

Isenring was one of the 35 individuals that joined together to incorporate the Village of Whitefish Bay, and served as the first president of the village from 1892-1895. As one story notes, “it could be argued that he did more than anyone else to develop the Village.”

Isenring later became Milwaukee County Sheriff and was accused of “absconding with $20,000 of the County’s money.” An order for his arrest was issued, but before it could be carried out Isenring had left town.

“He was never seen again,” the story in Whitefish Bay Now recounts. “While the family stated that they believed that he may have committed suicide, rumors persisted in the months following his death that he had fled to Puerto Rico, Alaska or even south to start a wine business.”