Towards a Greater Bay View

Neighborhoods west of I-94 need better connections to Bay View, which would improve entire area.

Milwaukee’s 14th aldermanic district covers Bay View and portions of Lincoln Village, Polonia and Morgandale on the city’s South Side. These neighborhoods, traditionally rooted in manufacturing and parish life, underwent major transformations on diverging paths over the past 20 years. The forces shaping these neighborhoods parallel those facing Milwaukee, a tale of two neighborhoods within a tale of two cities.

The fortunes of Bay View could not look brighter. Bay View has strong organizations and associations promoting all aspects of neighborhood life.  Investments are pouring in, raising property values, creating new businesses and attracting highly educated and wealthier people. When Bay View talks, government snaps to it.

Lincoln Village, Polonia and Morgandale have remained closer to their traditional working-class roles but have seen great change nonetheless. Recent research has described the rapid growth of the Latino community in Milwaukee. As the Polish immigrant population integrated, aged and moved, Latinos have moved into these South Side neighborhoods. Like the Polish immigrants before them, Latinos are creating their own engine of economic mobility, albeit with 80- to 120-year-old parts. Day-to-day life is the paramount concern for these communities. It is harder for these residents to voice concern, and when they do, it is easier for government to ignore them.

My family moved to Polonia on S. 7th Street in the summer of 1995. The neighborhood was a mix of working and middle-class folks. It was not perfect, but it was a good place to grow up.Neighbors kept tabs on the block, collected each other’s mail while on vacation and helped out the elderly when the snow came. You could sit on your front porch and enjoy a summer’s sunset chatting with neighbors while the lightning bugs came out.

After graduation and landing a meager-paying job, I took a higher-paying job out of state in 2011. I would visit home several times each year, each time noticing the decline of the block. And the decline I saw was staggering. 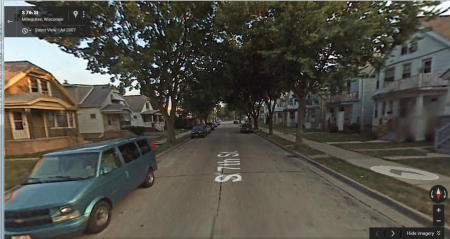 Foreclosures hit the block hard and owner-occupied homes turned into rental properties. Even the lush tree canopy disappeared, leaving the block bleak and desolate. Once the Oak Leaf trail was constructed along the Kinnickinnic River, I would walk to the heart of Bay View where Lincoln, Howell and Kinnickinnic avenues meet. I was happy to see Bay View becoming so vibrant. However, walking back to my block highlighted the gulf between these once similar places.

I advised my parents to move. I argued that it was not worth investing in their house because there would be no return. Instead they decided to stay and continue making improvements to the house. I admire their steadfastness in not giving up on the block since further decline was inevitable without a major change.

One day, using the Google Map’s timeline tool, I looked at S. 7th St. using street view. From 2007 to 2015, I watched a time-lapse displaying the block’s physical decline. The most noticeable aspect was the destruction of the streets’ once brilliant tree canopy. I fired off dozens of emails to Alderman Tony Zielinski, other government representatives and directors of city departments. I expected nothing; instead I got a quick response from Alderman Zielinski and rapid-fire emails from the city’s forestry department late on the Friday afternoon before the Memorial Day weekend. Two trees were planted within a week. Trees are great and needed but larger, more painful problems loom. 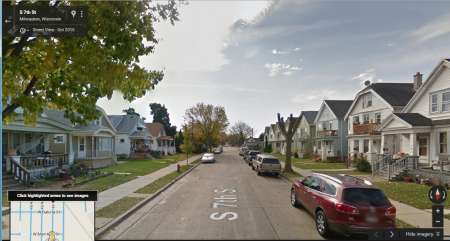 That experience made me realize a major contributing factor between the diverging fortunes of Bay View and the neighborhoods in the 14th district west of I-94. Bay View’s neighborhood relationships not only continued, but became stronger and more sophisticated, while those same relationships west of I-94 declined and disintegrated. If we repair the connections between neighbors, businesses and government in Lincoln Village, Polonia and Morgandale, and collaborate with those in Bay View we can unite the fortunes and create a brighter future for all in Milwaukee’s 14th district.

I propose the following three-point action plan: apply existing city services; create a new community organization representing the 14th District neighborhoods west of I-94; and establish communication across the I-94 divide with existing Bay View organizations. This is how we unit the 14th District to improve safety and the quality of life for everyone.

First, we must apply existing city services in full force. This involves organizing among ourselves; join me at Southside+Bayview: Unite the 14th to continue the discussion. This group can serve as a forum if you need help with an issue. Download the City of Milwaukee’s Mobile Service Request App or go online to the Neighborhood Services web page to log neighborhood service requests. Conduct weekly or monthly neighborhood sweeps and monitor the progress here. We have a powerful tool to address problem landlords in the city’s Nuisance Ordinance; we must learn how to use it.  Finally, register to vote. Aldermanic job performance is measured at the polls.

Second, neighborhoods within the 14th District west of I-94 absolutely must organize. We have no voice and we endure the burden of crime, blight and disinvestment in silence. We will no longer suffer in silence; we will organize and let our voice be heard loudly. Our neighborhoods are at the cusp of spiraling into a negative feedback loop of disinvestment and decline. We must act now and in full force before it is too late. Once we establish our organization we will open lines of communication with our sister organizations in Bay View to align district goals, break down divisions, learn and benefit from each other.

Third, when Bay View speaks on district issues, Bay View must include the neighborhoods in the 14th District west of I-94. Bay View has a progressive, informed and educated population that is aware of problems facing society, especially inequality and social injustice. Here is the opportunity to put those progressive ideals into action. Reach out and include residents and business owners west of I-94 in the 14th District to your meetings and discussions. Tell folks the story of what it took to create the vibrant, successful Bay View of today.

We all want the same thing: safe streets and a brighter future. A stronger, safer western 14th District creates a stronger, safer Bay View. Let’s get started and do good work.

Jason Biernat, who grew up on S. 7th Street between Oklahoma Avenue and Manitoba, contrasts the state of the block, where his parents still live, with Bay View, which is also in the 14th aldermanic district.

9 thoughts on “Op-Ed: Towards a Greater Bay View”