By Dave Schlabowske, Bike Federation of Wisconsin - Jun 5th, 2016 12:37 pm
Get a daily rundown of the top stories on Urban Milwaukee 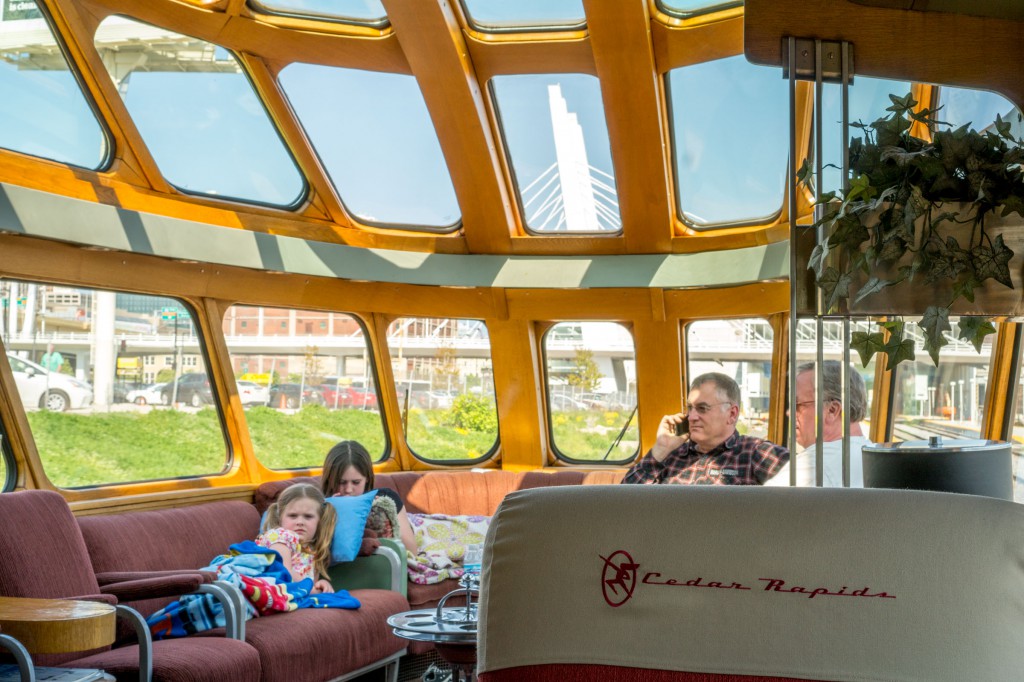 Remind me again why we abandoned rail travel for airlines?

I am finally fully recovered from my fourth Train, Train, Train trip with Tom Schuler which features a ride from Milwaukee to St. Paul on the super cool 1938 Brooks Stevens-designed Cedar Rapids train cars and a three-day, 385-mile-ride back to Milwaukee from there. Tom has been doing this trip for more years, but it was only in 2012 that he invited me and a short list of friends along four years ago. That same year, he also agreed to auction off a spot or two on the trip at the annual Bike Fed Saris Gala as a Bike Fed fundraiser. 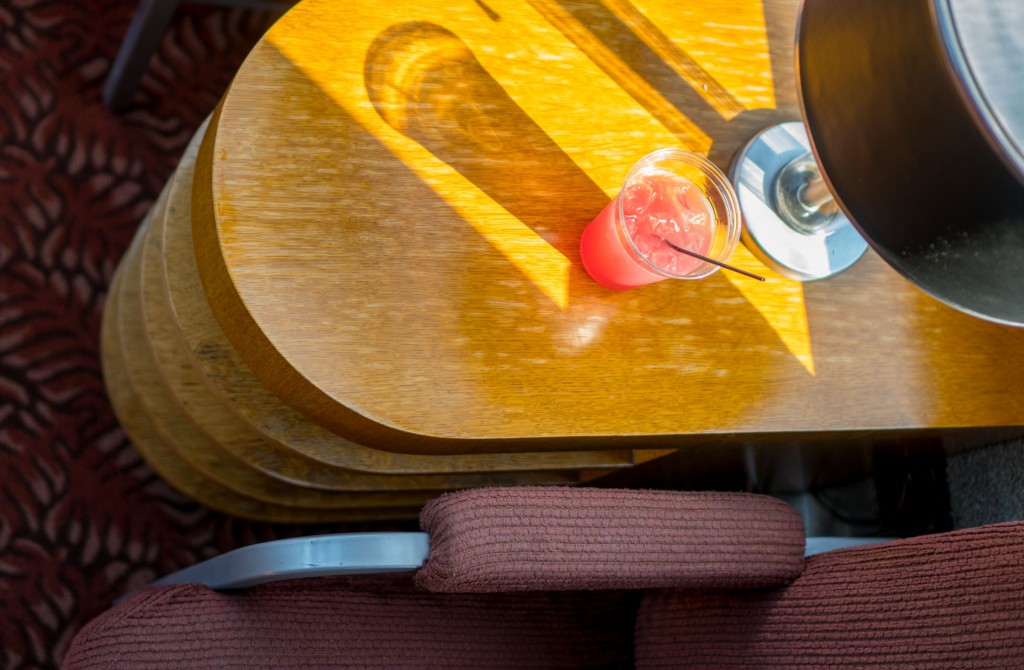 Did I mention the fabulous train has an open bar car with all high-end spirits? Careful…

It was a pleasure and an honor to be invited along on a ride with Tom, a Milwaukee native and racer whose palmarès include riding on the famed 7-Eleven team, the first US team to race in the Giro d’Italia in 1985 and the 1986 Tour de France. The team Director Sportif was Jim Ochowicz, another proud son of Wisconsin, who currently manages the BMC racing team. To make this year even more special, TTT regular Jon Antonneau’s daughter came along. Kaitie Antonneau is a 24-year-old Racine native who has won multiple US Championships and is currently ranked 7th in the world at cyclocross and races for Cannondale. 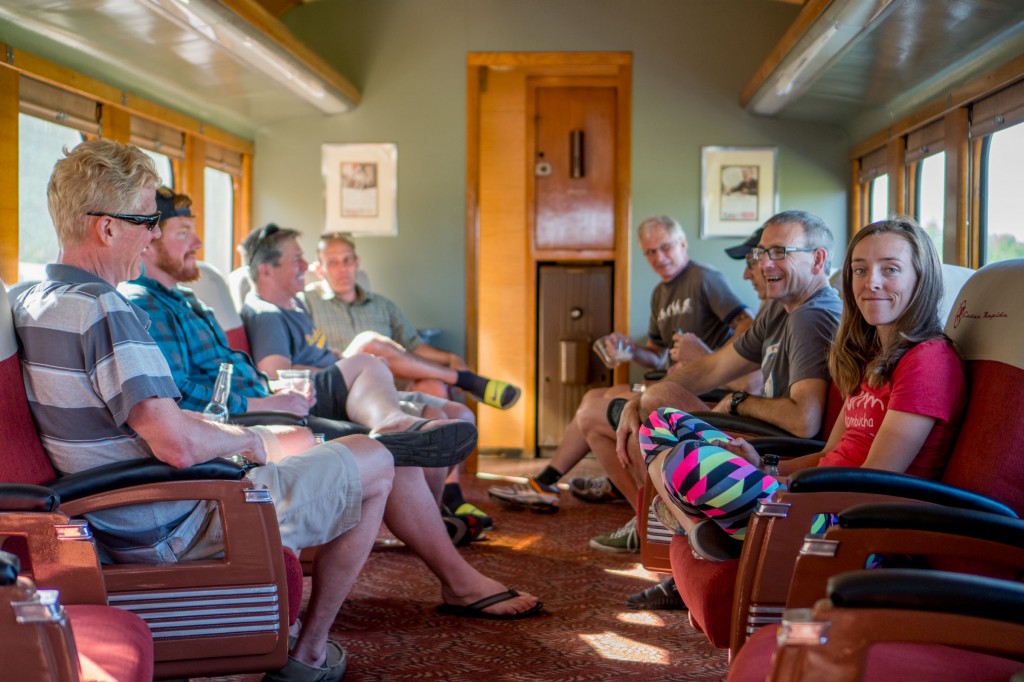 Thanks for joining us Kaitie!

With a 19-year-old daughter myself, I enjoyed watching the close father-daughter dynamic between Jon and Kaitie on what had heretofore been a testosterone-only trip to date. And with her precocious pro peloton experience and fitness, Kaitie was a great addition to the group. I have never seen anyone ride in a group with her innate proprioceptors. Not only was she a strong, steady wheel to follow, she always seemed to be in the right place at the right time. Of course she shepherded her dad closely, but she also took her turns at the front without splitting the group. 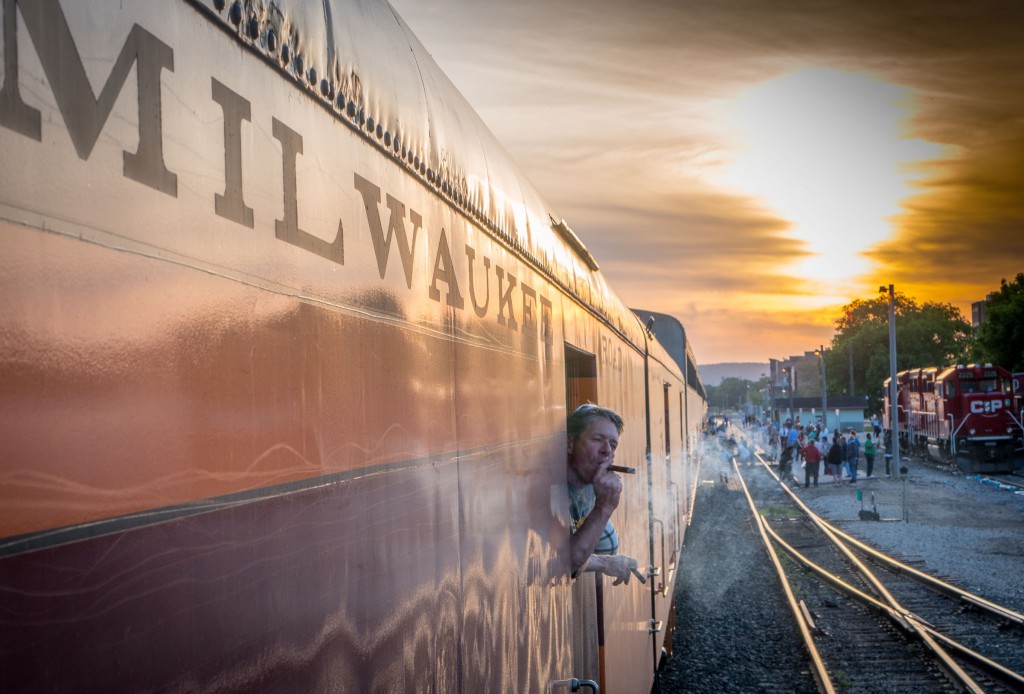 Tom Schuler smoking a Cuban at a stop. The ability to walk around the train, grab a drink, smoke in the open baggage cars, etc. make the train trip up to St. Paul a big part of this trip.

And when our other super strong rider John Fleckenstein needed to blow the carbon out of the cylinders on a big climb, she was right next to him with a little “let’s go John.” As I told you after the end of the ride, Kaitie, you are welcome on any bike trip I plan, unless your training schedule calls for intervals, that is. 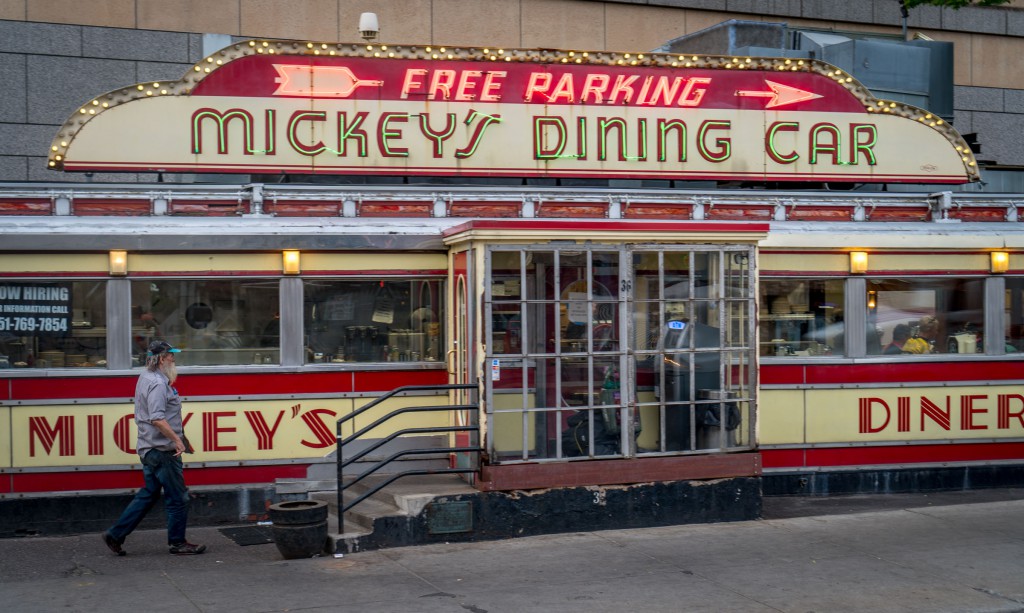 Good food is big part of the Train, Train, Train trip, and what better breakfast place than Mickey’s Diner to kick off the trip from St. Paul. Mickey’s has been open 24 hours a day, 365 days a year since 1948. 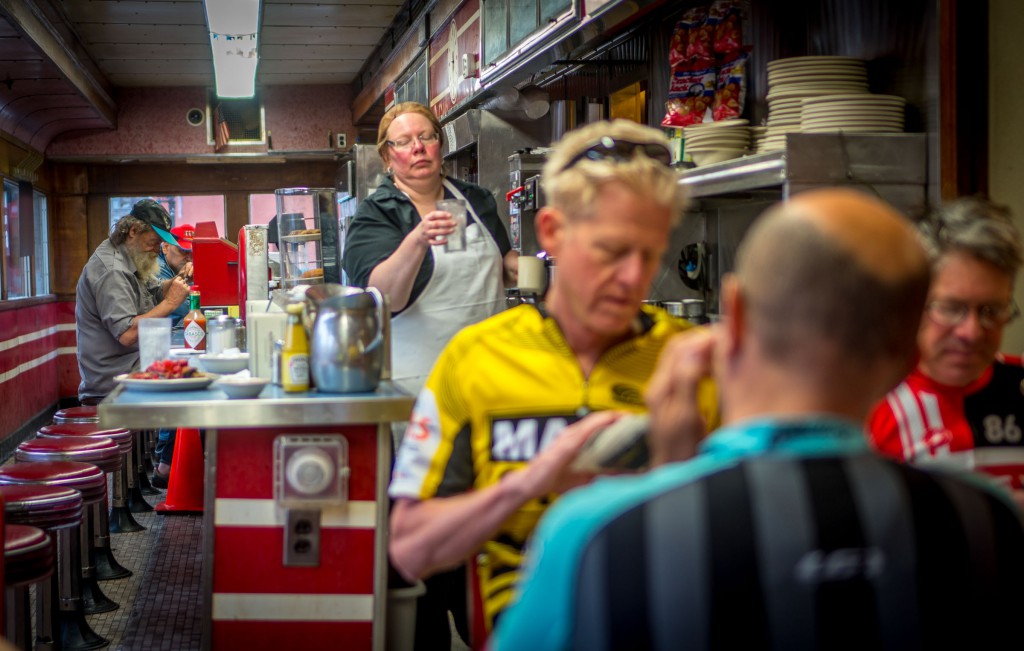 Our trip this year was relatively uneventful. We had a pretty nasty headwind the first 125 mile day, but it was warm and sunny the whole ride, and mother nature granted us a ripping tailwind for the last 25 miles or so into Trempealeau. We dodged most of the rain too on all three days. Fleck said he prayed for good weather in church the Sunday before we left, and the rest of us heathens must be living right because there was really nothing to complain about in terms of precipitation or temperatures.

As you can see by the photos, Julian Kegel, our group stress tester, did manage to break a bunch of spokes on the ride. Luckily he grew up in the Wheel & Sprocket family, so he is no stranger to wrenching on bikes. He deftly replaced his spokes on the ride and had a stronger wheel-set shipped to him in Baraboo after the first day.

The only time we almost got drenched was just as we pulled into Dousman, where we stopped at the Bicycle Doctor for some “refreshments.” Just as we were drinking our beverages on the benches, the heavens erupted and it rained cats and dogs. Whether by the grace of God or good Kharma, we watched the downpour and closing double rainbow from the dry comfort of the benches under the awning with Doc, who is threatening to come with us next year!

After four years of this, I can’t wait until next May. We will have a couple spots on the 2017 Train, Train, Train trip open to newcomers at the Saris Gala later this Fall, so please come to that and bid it up at the live auction if you want to join us. You can read about a previous trips here, and here, and see the photo archive here. 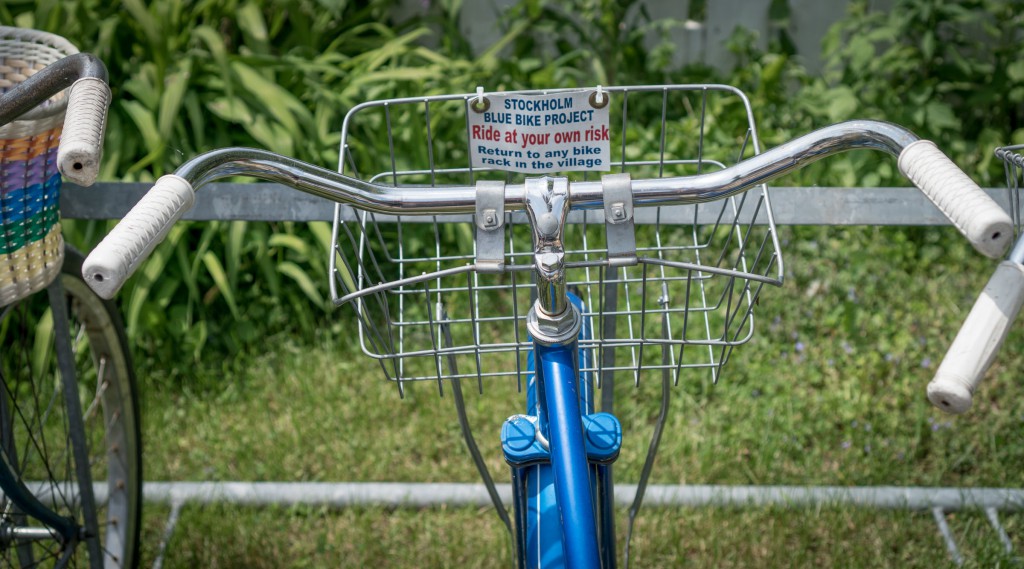 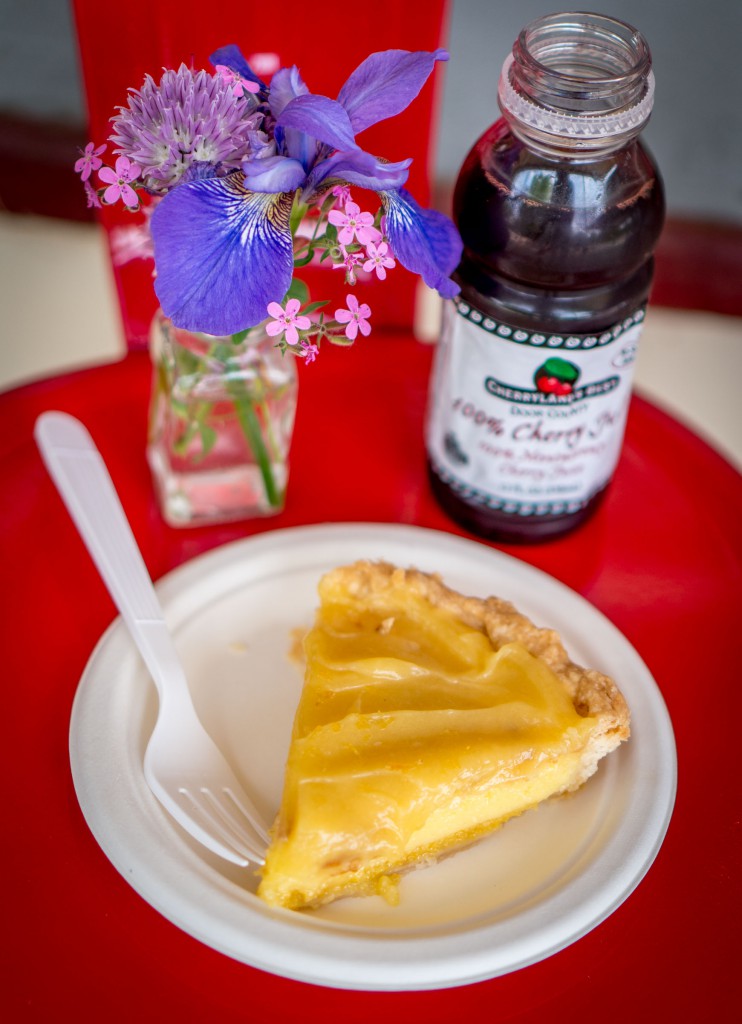 For the pie…. Double lemon with Door County Cherry Juice was my choice at the Stockholm Pie and General Store.

As I have photographed this trip extensively for four years, and fellow TTT travelers Peter DiAntoni and Kegel are both great photographers, I didn’t feel pressured to shoot a lot this trip. Just before we left I did see some great work by Glenn Charles, a cycling adventure photographer I admire. Glenn had just come back from a trip in which he only brought a 50mm (normal) lens and a Leica 35mm digital camera. You can see his stunning and thoughtful story-telling images here, but my point is he inspired me to try traveling light too. 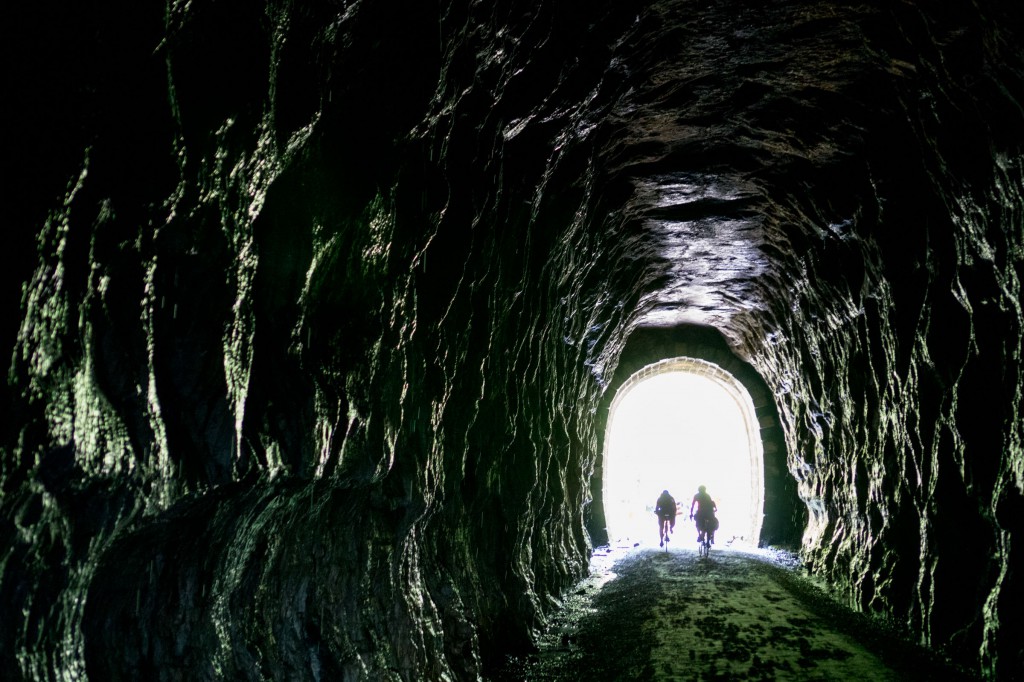 As a former professional photojournalist, I always carried a couple Nikon bodies, and the following lenses: a 16-35 F 4 or similar ultra wide prime, a 24-70 F2.8, a 70-200 f2.8 and a fast prime lens like a 50mm F1.4 for every assignment. Add in a 300mm or 400mm F 2.8 when needed, flash, battery packs, remotes, etc. and the gear was pretty substantial for a bike trip. I brought all that on the first couple trips, and I paid for it on every climb. I have since switched from Nikon DSLRs to the smaller, lighter Sony Alpha mirrorless system, but all that glass still adds up. 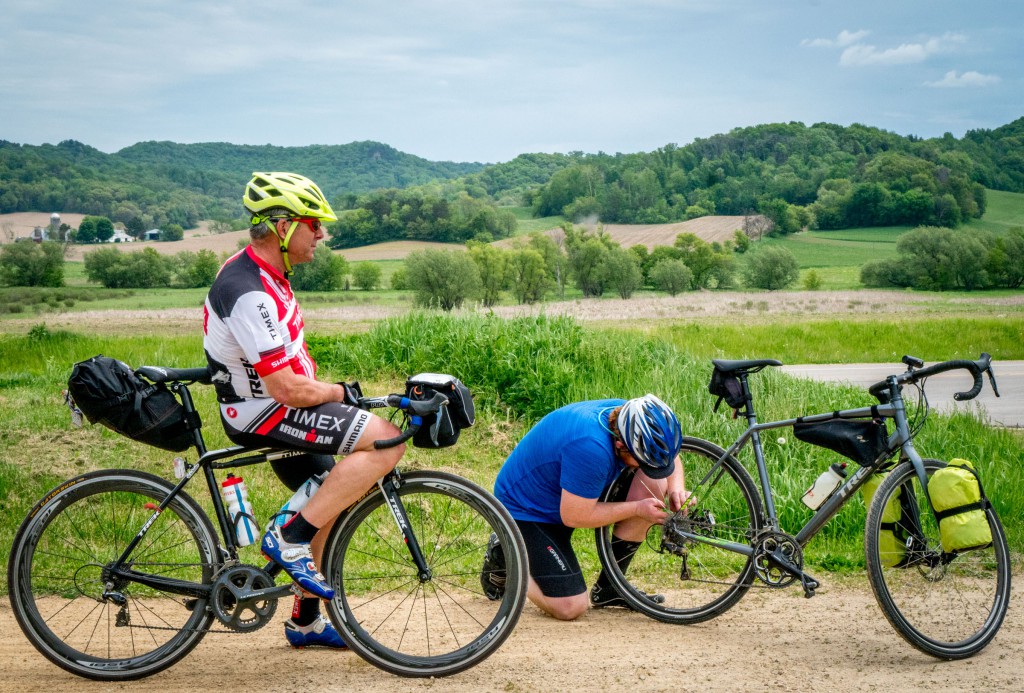 With Glenn’s great work as my inspiration, this year I only brought a Sony A6300 APS-C 2/3rds crop sensor camera and a 35mm F1.8 lens (50mm normal equivalent on a full frame camera).  I was nervous about the need for a wide angle on the trip, but also excited about the challenge and loving the reduced weight. My fully loaded carbon Fyxation Crusher tipped the scales at 31 lbs, including lights, camera gear, clothing, Bonk Breaker bars, and clothing, and I easily could have dropped another few pounds in unneeded clothing if I wanted to.

You can be the judge on the photos. Glenn, I frequently did want for a wider lens, so I am thinking that maybe a 35mm might be the way to go next time I try to limit myself to one lens. That said, I never kicked myself for the limiting structure. Thanks for the inspiration Glenn, and see you all on the trail soon. 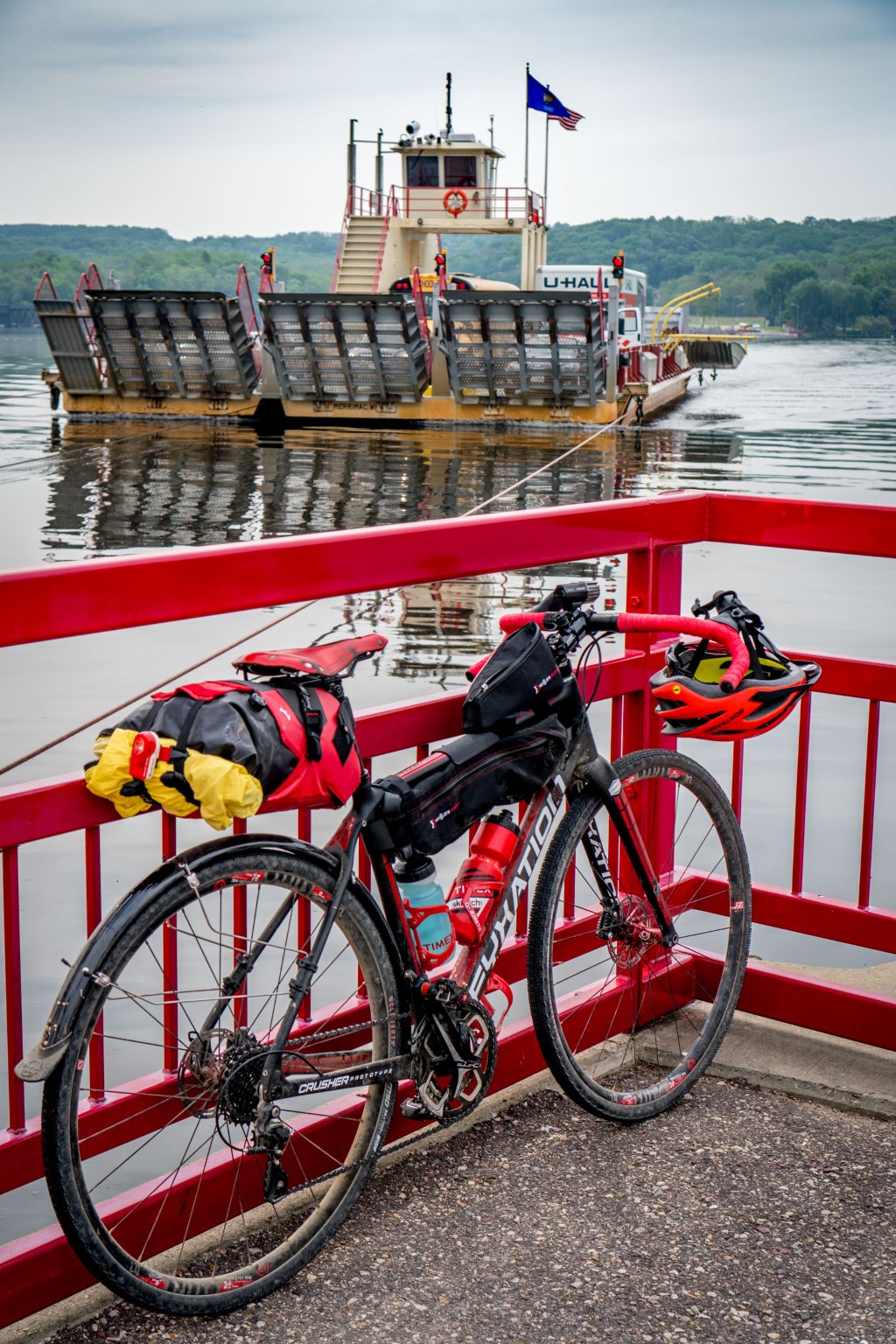 Multi-modal trip: a train, a ferry and bikes.

I should also say a little about the bike I took on this trip. On all previous TTT trips, I have taken my 30-year-old custom lugged steel Waterford Precision Cycles adventure bike. That remains one of the favorite bikes in my stable, but I was looking for a modern version of it: enter the Fyxation Crusher carbon fiber gravel bike. At 19 lbs with pedals and three water bottle cages, the Crusher is a lightweight work horse.

The Industry Nine ULCX Disc tubeless wheels with Clement MSO ‘XPLOR tires roll so fast and smooth, with a feel that is like a pro set of handmade tubulars. I have ridden them at 22 psi on soft gravel and 60 psi on the tarmac, and never had a flat. The wheels set-up tubeless in minutes and have already taken some pretty serious abuse. I have even ridden them on single-track mtb trails with no issues.

Even fully loaded with my Revelate bags packed with a week’s worth of stuff, the Crusher was super stable on double nickel downhills and climbed like a dream when the road tilted up. My bike is a prototype, but Fyxation should have production models in by the end of June. I have always used Carridice bags on my Waterford, but these Revelate bike-packing bags are more waterproof, lighter and more stable when climbing out of the saddle. Retro-grouches do not fear, I still plan to use my 30-year-old Low-saddle longflap for as long as I am able to pedal. 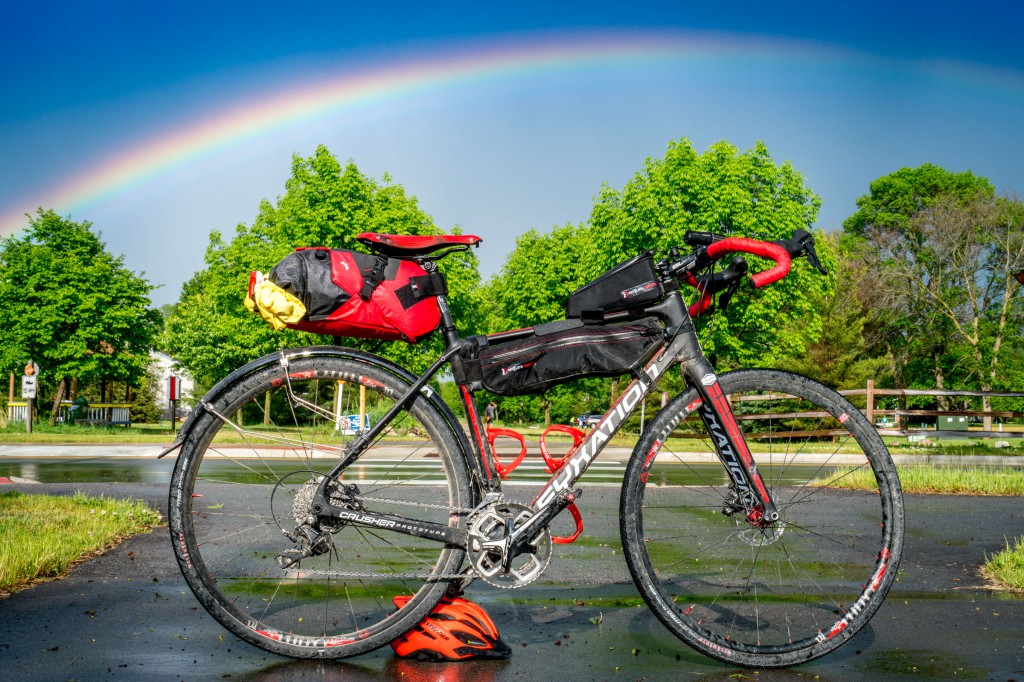 We really must be living right.

I am really looking forward to next year’s TTT ride. If you want to join us, be sure to be at our annual Saris Gala to bid on the trip. If you just want to take a trip on the fabulous train, check out the calendar for the Friends of the 261 here. They do other excursions and you are welcome to bring your bike aboard without any boxing or additional fee. In addition to the Art Deco-era train cars they also have a super neat steam locomotive, Engine 261. Foamers take note!