The Ride to Door County

Riders from across the state cycled 70 miles (or less) in final Spring Classic.

By Dave Schlabowske, Bike Federation of Wisconsin - May 20th, 2016 03:37 pm
Get a daily rundown of the top stories on Urban Milwaukee 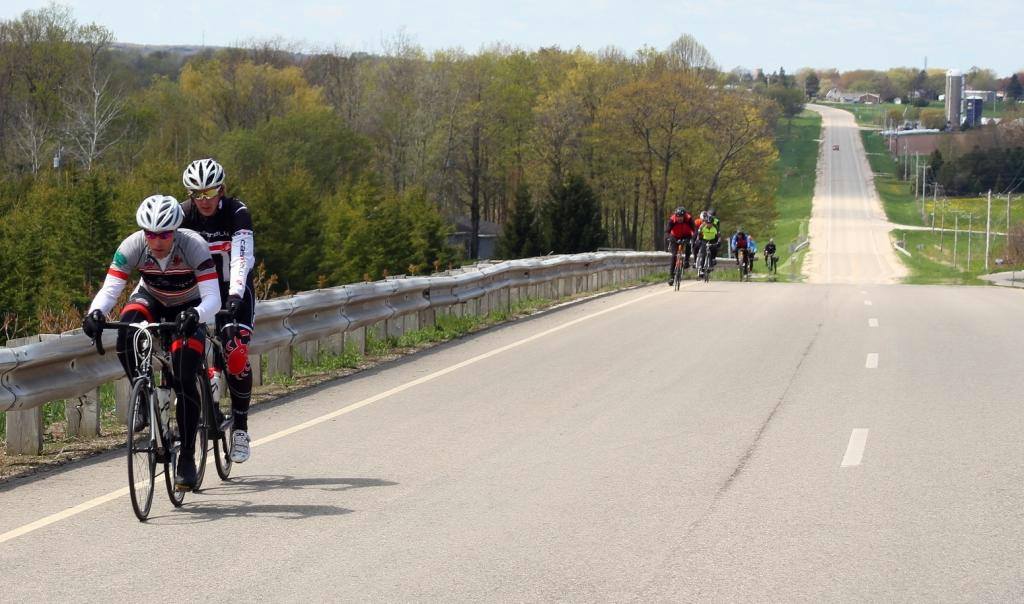 And the elastic breaks!

Thanks to Carl Grota and the folks at the Door County Silent Sports Association for hosting the last Spring Classic. The weather for their first annual Route du Sud: The South Half of the Door was suitably Belgian-esque, with 20-mph winds and temperatures in the upper 30s. The sun was shining at the start though, which reduced the total possible Flanders points, but, fresh brewed caffeine from Kick Coffee lifted everyone’s the spirits.

Along with the coffee and free food from the local Pick’n Save, the start in Otumba Park was festooned with Belgian flags and a tempting assortment of beer from Door County Brewing, which awaited riders when they finished. There were two route options, a 70 miler and a 47 mile tour.  Normally I would have taken the long route, but I needed to get back to Milwaukee for another event that afternoon, so I planned to ride the short route. 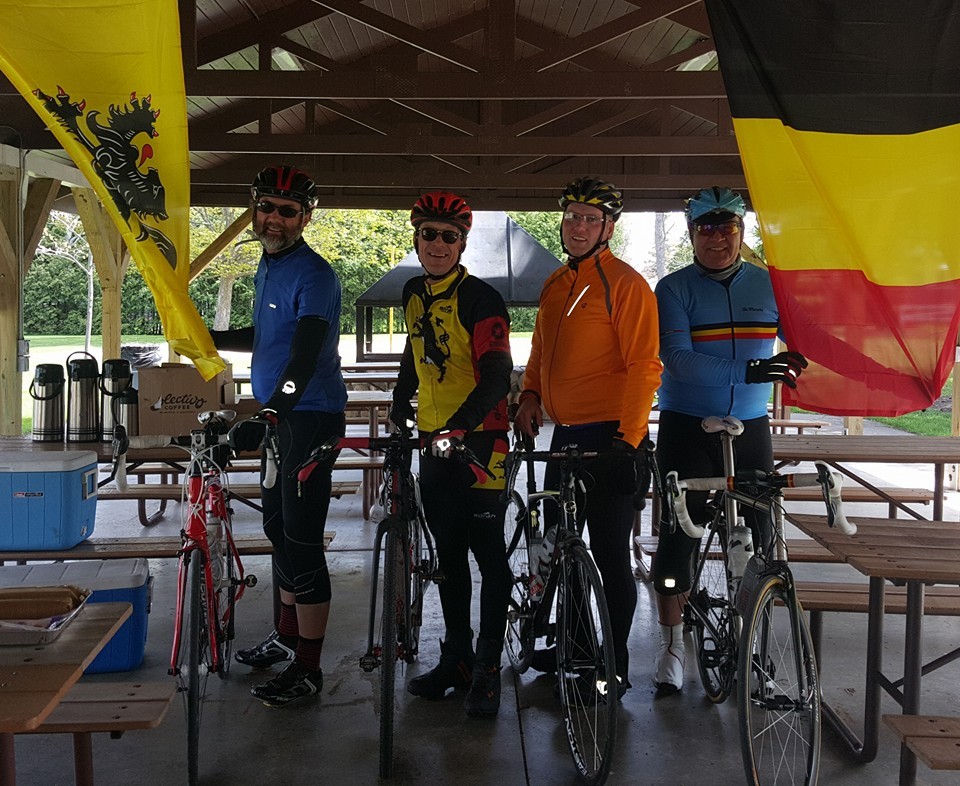 Kyle, me, Al and Jeff at the finish. Thanks for the great ride and company, fellas!

I fell in with the faster group out of the gate. Had I known I had hitched my wagon to the Door County bullet train, I might have picked the longer route. I was being pulled along at 23 mph, riding a hilly course, with much of it into the wind! Freddie, Swedish chef from Al Johnson’s Swedish Restaurant (you know the place with the goats on the roof), was a monster!

The wind was pretty brutal at times, but nobody riding a bike on a sunny day in beautiful, low traffic roads of Door County was complaining. We were chatting about Flanders Points, which I joke about almost every ride, and I decided to actually include them for next year. I came up with this algorithm, but I am open to suggestions to modify it: FP = M x 50/Ts + R + S +W-10

We can then keep track of people’s Flanders Points for next year and raffle off some swag for the leaders. This might be a fun way of encouraging people to do more rides, even when the weather is crummy.

There are the points I came up with based on the conditions in my ride reports. I did not make it to the Strada Fango and didn’t see a ride report, so I can’t calculate those points.

Even though I was rolling ahead of schedule, I decoupled from the pointy end of the peloton when the 70 mile route split off and finished the short route at a more conversational pace with Al Duessler and Kyle Gigot from Door County and Spring Classics regular Jeff Hahn from the Fox Cities. It was nice to see riders from around the state traveled up to Door County for the last Classic.

Turns out we were the first finishers, which is a first for me. That is probably because I didn’t stop to take photographs this ride. I made a total rookie mistake and forgot to bring a spare battery for the smaller camera I brought along. When I pulled it out at the start, the battery in it was dead, doh! It won’t be the first time I had to rely on the kindness of strangers! I hope to get more photos from the locals soon to add to a magazine story about the classics for next year’s Ride Guide.

Speaking of kindness, a BIG thanks to Deb and Joseph Neuville for putting me up at their house Saturday night! That sure beat sleeping in the back of the Bike Fed Sprinter van!

While I am a bit sad to say vaarwel to the Spring Classics Series, it was a great start to a new Wisconsin cycling tradition. I will be in contact with the ride organizers soon to put the 2017 schedule together and hopefully add a ride or two in other areas of the state to fill in the empty weekends in the calendar. Dank uwel to everyone who participated in a Classic this year!