Who Wins From Walker Tax Cuts?

There are many winners... depending on how you analyze data. 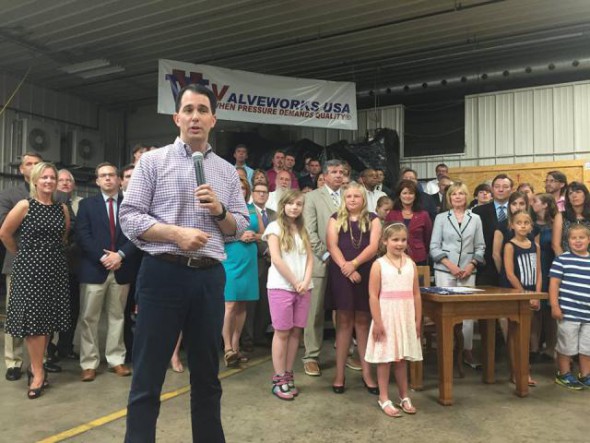 A new state Department of Revenue (DOR) estimate attempts to show that lower- and middle-class taxpayers were helped most by cuts in personal income tax rates that took effect in 2013 and 2014.

But what DOR omits makes the estimate “worthless,” says Todd Berry, president of the non-profit Wisconsin Taxpayers Alliance (WTA) and a former DOR official. WTA has analyzed the state’s tax laws for decades.

DOR estimated what the 2013 and 2014 cuts in state income tax rates, approved by Republican Gov. Scott Walker and Republican legislators, would mean for those residents who owe taxes on specific taxable incomes in 2016. Because of state tax credits, deductions and exemptions, one in four residents who file income taxes don’t owe any taxes.

DOR’s conclusions: Low- and middle-class taxpayers will get the largest percentages in the average tax reduction, based on the cuts in tax rates. For example, according to a DOR chart, residents with taxable incomes of less than $50,000 will see tax-rate cuts of up to 13.8 percent. And, tax-rate changes will save all taxpayers about $423.6 million — $219.6 million of which will go to taxpayers with taxable incomes of $100,000 or less.

But Berry complains the DOR didn’t put the $423.6 million in perspective. He estimated Wisconsin’s total gross domestic product (GDP) at between $250 billion and $300 billion, so the tax cut is much less than 1 percent of the state’s economy.

A bigger criticism of DOR’s data is that it didn’t estimate the average tax cut for each income category in dollars. For example, how much more will taxpayers in specific income groups have in their pockets because of the cuts in tax rates?

Do that math, and other winners emerge:

*Those with taxable incomes of more than $200,000 will get an average tax cut of $892. They also make up about 4 percent of taxpayers who owe taxes.

So, other valid conclusions from DOR’s numbers are: Because the wealthiest taxpayers pay the most in income taxes, they will benefit the most – from a dollars-in-your-pocket standpoint – from the cut in tax rates. And yes, low- and middle-income taxpayers will have the biggest percentage decrease in their taxes – because they pay so much less in taxes.

But DOR also made no attempt to consider the impact of four other major tax-code changes:

*Homestead Tax Credit: In 2009, Democrats tied the Homestead tax break to the annual increase in the Consumer Price Index. Republicans repealed that annual “indexing,” beginning with the 2011 tax year.

*Manufacturing and Agriculture Tax Credit: In 2011, Republicans enacted a tax break for manufacturing and agriculture income derived from property located in Wisconsin. According to the DOR, that credit will be a $205-million tax break in the budget year that ends June 30.

*Alternative Minimum Tax (AMT): In tax year 2017, the exemption amounts for Wisconsin’s AMT will be increased to align with federal tax law, which will benefit higher income taxpayers. The Legislative Fiscal Bureau’s May 2015 summary of this change estimated the cost of this additional tax break at more than $21 million annually.

And that, as the legendary commentator Paul Harvey noted, is “the rest of the story.”

Steven Walters is a senior producer for the nonprofit publc affairs channel WisconsinEye. Contact him at stevenscwalters@gmail.com

One thought on “The State of Politics: Who Wins From Walker Tax Cuts?”