A Rough Ride to Denmark

The wind was blowing half a pelican for our ride from Green Bay to Denmark, WI.

By Dave Schlabowske, Bike Federation of Wisconsin - Apr 24th, 2016 08:32 pm
Get a daily rundown of the top stories on Urban Milwaukee

I knew the ride was going to be tough as soon as I stepped out of the car in front of Broken Spoke Bikes’ Green Bay shop. As the Danes say, it was blowing half a pelican (det blæser en halv pelican), which is their way of saying it is a windy day.  Not only that, the mercury was hovering around 35 degrees and the forecast called for rain right after noon, around the time we would be getting to Denmark. Oh well, full Flanders points for all today! 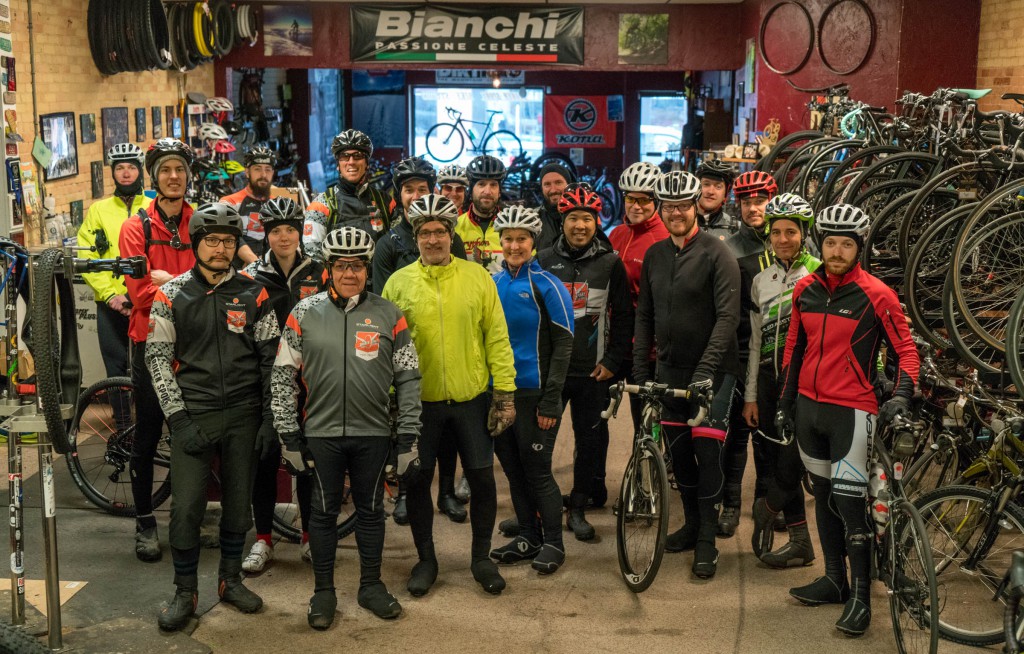 Inside Broken Spoke’s shop at 151 Broadway in Green Bay. They will be moving to a new location on the Fox River Trail in a month. They also have shops in De pere and Two Rivers.

There were about 20 rouleurs waiting in the warmth when I walked through the door of Broken Spoke at 8:30am. A few had come from the Fox Cities area, but otherwise most were locals, with a fair number kitted up in Broken Spoke gear. After people pumped up tires and debated their clothing options, we did our little pre-ride talk and hit the road. 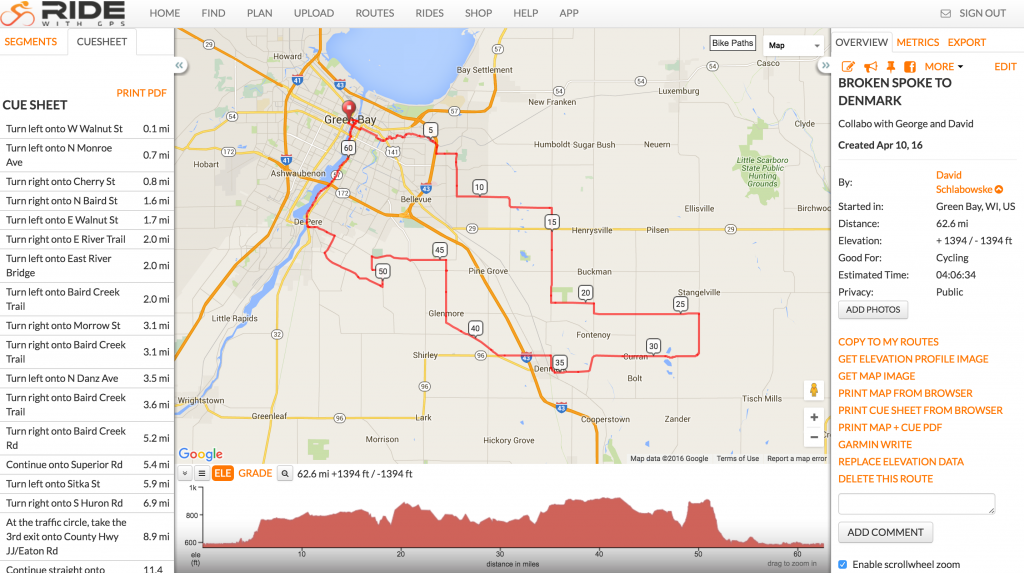 Note Scray Hill, the “wall” near the end of the route.

George Kaptiz and the crew from Broken Spoke put together a metric century route featuring the area’s cycling amuse bouches, from the Fox River Trail, to the Scray Hill climb, to scenic rural roads past Dutch farms, windmills, rivers, and even a waterfall. Our mid-ride stop in Denmark was to be at Suster’s Arcade, famous for their broasted chicken, and my mouth was watering at the thought of it.

With the strong winds and riders of pretty wide-ranging abilities, we knew the group would break up when we hit the windy, open-country roads. We had that covered as a handful of riders had the route on Garmins or phones. The plan was that someone with the route would stick with any groups who fell off or went off the front.

Sure enough, it wasn’t long before the elastic broke between the Tête de la course, the Arrière du peloton and the main group. When that happened, the main group stopped and we let the leaders ride away (have you noticed that I’m never with the leaders?) while we waited for the tail to catch up. At that point we agreed that one of the riders who knew the area and had a GPS would take the slower group on a short cut to Denmark, skipping most of the big climbs and saving them 10 miles or so. The rest of us kept following the original route.

Most riders seemed to be out of gas by the time we made it to Denmark, which was perfect, because Suster’s is the local favorite for broasted chicken. For the few readers who don’t know, broasting is a method of cooking that involves deep frying under pressure. Fittingly, like the hamburger and malted milk, it was invented in Wisconsin! I ordered two pieces of white meat, which came with a choice of potatoes, slaw, and a roll — for less than $7. Add a giant coke with a shot of Jim Beam and I was stuffed and smiling for less than a ten spot. 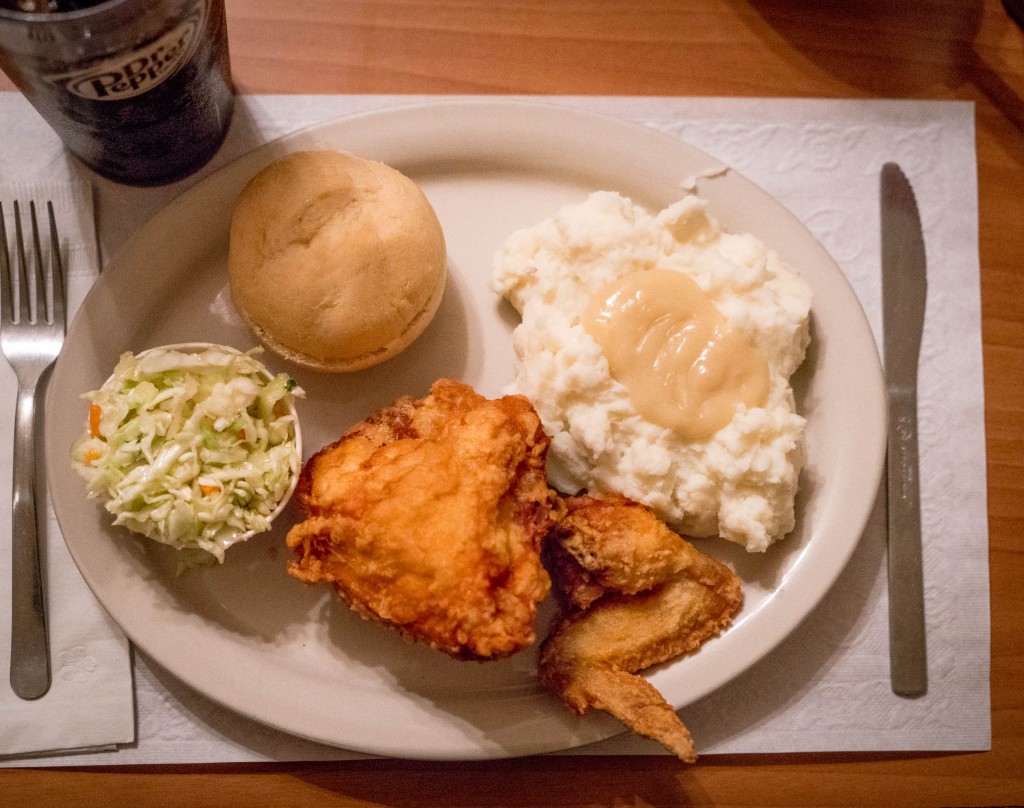 This is the smallest portion on the menu!

I pride myself on being an aficionado of Wisconsin delicacies, so I was struck dumb when I saw a sign for “knee caps, homemade dessert” behind the bar. I had never heard of this wonderfully named treat. When I asked what a Knee Cap was, the bartender responded “a dessert.” Hmm, I guess someone is going to have to order one. Lucky for me, someone did and I found out they are kind of like a cream puff without the top. 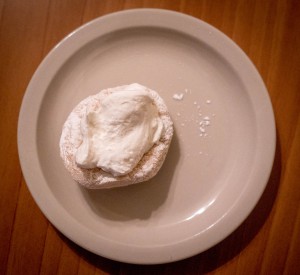 Knee caps are yummy, but not really finger food.

That seemed strangely appropriate in Denmark, since the Danes are so proud of their open faced sandwiches called “Smørrebrød.”  The best I can do to pronounce it is to say smerburl. My friends in Copenhagen have very politely never corrected me, but that really isn’t it. I can hear who to say it correctly, but I can’t get my mouth to make the right sounds.

After we stuffed ourselves and paid our incredibly reasonable bills, we stepped outside for a group photo of the medium-paced crew. The fast guys and the short-cutters had left before we got there. Due to the wind, a couple people decided to bail and made the call of shame for a ride back. No worries though, I was happy everyone made it to Denmark.

Our ride back featured a tail wind most of the way and the climb up the famed Scray’s Hill, which was indeed the most punchy climb of the day. The reward for our efforts was a long mostly downhill ride back almost into town. Let me tell you, nobody was complaining about 40+ mph without pedaling after all the riding uphill into the wind we did today.

It was not long before we were back riding along the Fox River on the wonderful trail and then in downtown Titletown. Our group stopped for one more iconic photo by the Titletown Brewery. No, we did not go in for one. I’ll save that for my next trip to Green Bay.

Just as an update, my vehicle for the day was my new Fyxation Crusher prototype gravel bike, which rode like a dream! Tipping the scales at 19 lbs 3 ozs with a regular saddle, pedals and three cages, this is my new all-road bike. It will replace my venerable, but now-dated 1998 US Postal bike, which weighs about the same, but has worn out components and a geometry better suited for racing than the kind of riding I do these days. Stay tuned for a full review after I put it through the paces on the Dairy Roubaix.

I want to say a huge thanks to George and all the crew from Broken Spoke for coming up with an awesome route. Thanks as well to the brave riders who took part in our fourth Spring Classic Ride.