Agency provides transition between refugee camp and a new life in Milwaukee.

By Andrea Waxman, Milwaukee Neighborhood News Service - Apr 17th, 2016 10:37 am
Get a daily rundown of the top stories on Urban Milwaukee 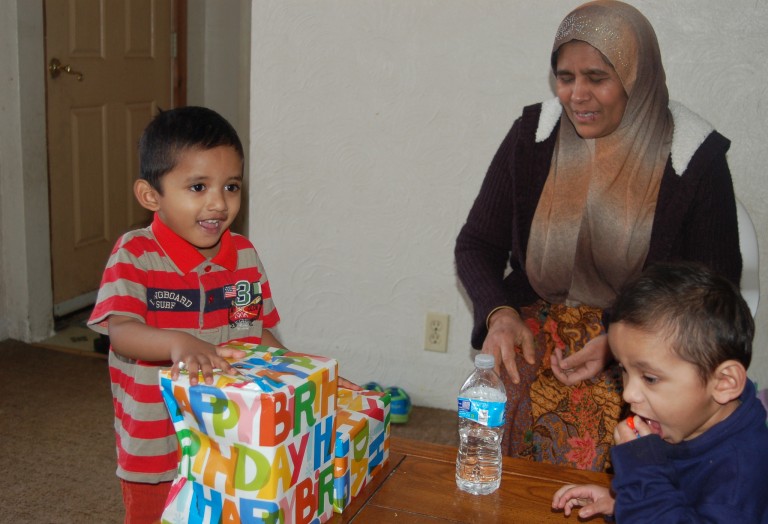 Mirjan Abdul Ghaffar recently told her friend and mentor Cindy Angelos that her heart hurt. Alarmed, Angelos asked Abdul Ghaffar if she needed a doctor. But Abdul Ghaffar, who is still learning to express herself in English, explained that the pain came from her sorrow over not belonging to any place.

What she said is, “There’s no place that’s my home,” meaning she was “homesick and heartsick and lonely,” Angelos said.

It may be quite a while before Abdul Ghaffar feels like she belongs in her lower flat just south of the Lincoln Village neighborhood. Refugees from Myanmar, she and her family arrived in Milwaukee on Oct. 1 with practically no belongings. But Abdul Ghaffar says they have all that they want. When she lived in Myanmar, she was so afraid she couldn’t sleep. Later, an unwelcome refugee in Malaysia, she still feared for her safety. Now she and her family feel safe.

In Myanmar (formerly called Burma), “the (Burmese) soldiers came to our village and took our money, our cows, our goats,” she said. In Malaysia, when she went to a hospital to give birth, staff members berated her for being a refugee and told her to go back to Myanmar.

Abdul Ghaffar is a member of a stateless people called Rohingya. “The most persecuted refugees in the world,” according to Amnesty International, the Rohingya are Muslims with roots in Bangladesh. Many have lived in Myanmar for centuries but are still seen by the Burmese Buddhist ruling majority as outsiders and are denied citizenship, education and even the right to marry. Their villages are routinely burned and some are forced into flimsy boats and pushed out to sea. Others choose to flee in such boats.

Abdul Ghaffar, her husband, sons and parents were welcomed to Milwaukee by representatives from the International Institute of Wisconsin. One of four local organizations that help resettle refugees in Wisconsin, the institute provides a crucial bridge for people who travel here from dramatically different environments and circumstances.

In addition to meeting refugees at the airport, providing a hot first meal and food for a week, institute staff members install them in rented homes equipped with basic furnishings. During their first three months in Milwaukee, caseworkers help refugees apply for Social Security cards and government benefits; arrange for medical screenings; introduce them to health care providers; and provide cultural orientation and English language classes. They also help them find employment and provide other support.

Though the federal government only requires organizations that resettle refugees to provide support services for 90 days, the International Institute chooses to leave its doors open for an indefinite period, according to Mung Ra, a caseworker at the institute.

After Angelos completed a background check and orientation for volunteers at the International Institute, she met Abdul Ghaffar in mid-December. Recently retired, Angelos said she wanted to “pay forward” her appreciation for the help her immigrant father surely received when he came from Greece in 1914 “with $25 in his pocket and not a word of English.”

In addition to gathering an impressive array of clothing and household goods donated by her friends, Angelos is helping the family navigate everyday activities such as shopping, banking, filling prescriptions and getting around the city via bus. But most importantly, she offers them friendship.

Abdul Ghaffar’s husband, Sirajul Kadir Hussain, has recently started to work sorting packages at Pitney Bowes, and he and his father-in-law have been attending cultural orientation and English classes. But Abdul Ghaffar and her mother spend almost all of their time at home with the children, so Angelos’ visits provide an important diversion and opportunity to speak English.

Though she is spending more time with the family than she anticipated, Angelos has found her work with them to be enormously satisfying, she said.

“It’s very gratifying to me to see them becoming more self-sufficient and feeling more comfortable with everything that they have to do to become Americans,” she said.

Abdul Ghaffar’s family escaped Myanmar when she was 12 and lived in Malaysia, where she later married and gave birth to two sons, Sufaidul, 3, and Hubaib, 2. She is expecting a third child in June. In Malaysia, Abdul Ghaffer taught herself to read English. Angelos tutors her several times each week.

Social worker Mung Ra said the language barrier is the biggest challenge for refugees. “Many came from refugee camps and have no education at all. Teens have to go to high school because of their age but they sometimes give up because (it) is too hard,” he said. 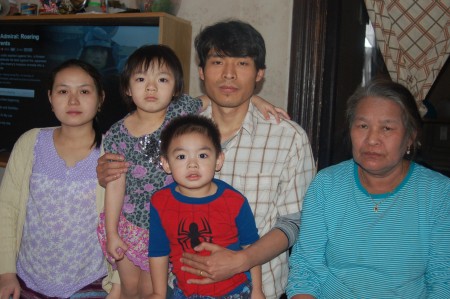 Learning English is difficult, but necessary for employment and citizenship, agreed Ball Nay Htoo, who came to Milwaukee with his wife, mother and infant son almost five years ago. His family belongs to another of Myanmar’s more than 100 ethnic minorities, the Karen people, and they too escaped the land of their birth. Raised in a Christian family, Ball Nay Htoo became a Catholic when he married, but the majority of Karens are Buddhists.

In Myanmar, the family worked as farmers in the Karen state, a jungle area in the southeast part of the country. But when Burmese soldiers burned their village, they escaped to a United Nations High Commissioner for Refugees (UNHRC) camp across the border in Thailand. Unlike his parents and older siblings, who had no education, Ball Nay Htoo, then 9, was able to go to school when they lived in the camp. Through foreign visitors to the camp, he learned that he and his family could seek refuge in the U.S.

Ball Nay Htoo and his wife, Naw Day, are both employed part-time as home healthcare workers. Since their arrival here, they have had a daughter and son and are expecting another daughter in July.

Educated in the Karen language, as well as English, Ball Nay Htoo, 27, helps others in the local Karen community of about 1000 read letters and documents. He also helps them find jobs. A community leader despite his youth, Ball Nay Htoo is concerned that the Karen refugee children are not learning their native language and culture. He hopes to establish a nonprofit organization that can support the community and serve as a resource for maintaining the Karen culture.

He and his family, including an older brother who followed, do not miss anything about Myanmar. “When I think about my people there I want to cry. They don’t have food, money, citizenship. They don’t have anything. They live like animals,” Ball Nay Htoo said.

“I feel very happy that we came here. The Karen state is not safe. It’s easy to die there,” he said. In Myanmar and in the Thai refugee camp his family feared the police and soldiers, he added.

The goal for refugees is to become self-sufficient, contributing members of the community, said Al Durtka, International Institute executive director. Though employment can be difficult, initially, because of the language barrier, “once they get going, they are very reliable and many work multiple jobs,” he said. “Employers like them and they go quickly toward home ownership.”

There are currently about 60 million displaced people in the world, according to Durtka, “the most since World War II.” Of those, the United Nations will consider 250,000 to 300,000 for resettlement somewhere in the world. Only about half will be granted refugee status and, this year. About 85,000 of those will come to the U.S. and about 1,500 will settle in Wisconsin.

Said Durtka, “It’s a very small number when you look at 60 million.”