Ride to Belgium Was a Challenge

The 75-mile round trip to Belgium, WI hit one hell of a headwind coming back.

By Dave Schlabowske, Bike Federation of Wisconsin - Apr 17th, 2016 08:38 pm
Get a daily rundown of the top stories on Urban Milwaukee

Anybody have an extra layer I can borrow?

The forecast seemed all wrong for our third Spring Classic’s Ride from Fyxation to Belgium. Sunshine and and a record high of 70 sounded like decidedly non-Belgian weather. On our first ride from Wheel & Sprocket to Paris it was 35 degrees and rained much of the 90 mile ride. It was 27 degrees when we left Ben’s Cycle for Rome a week later. Rides earned full Flanders Points for every mile on those tests of early endurance. I warned the riders that we might not get any points this time, but boy was I wrong.

Thanks to Wisconsin’s ever-changing weather, which was still cold when we took off, everyone earned full Flanders points. The peloton of 100 or so rouleurs shivered as they pedaled warily away from the warmth of Fyxation, with temperatures still in the mid 30s and with a monster headwind still to come for the ride back from Belgium, Wisconsin’s honorary home to Luxembourgers. I imagine Johan Museew and the Schleck brothers would have been proud of us. 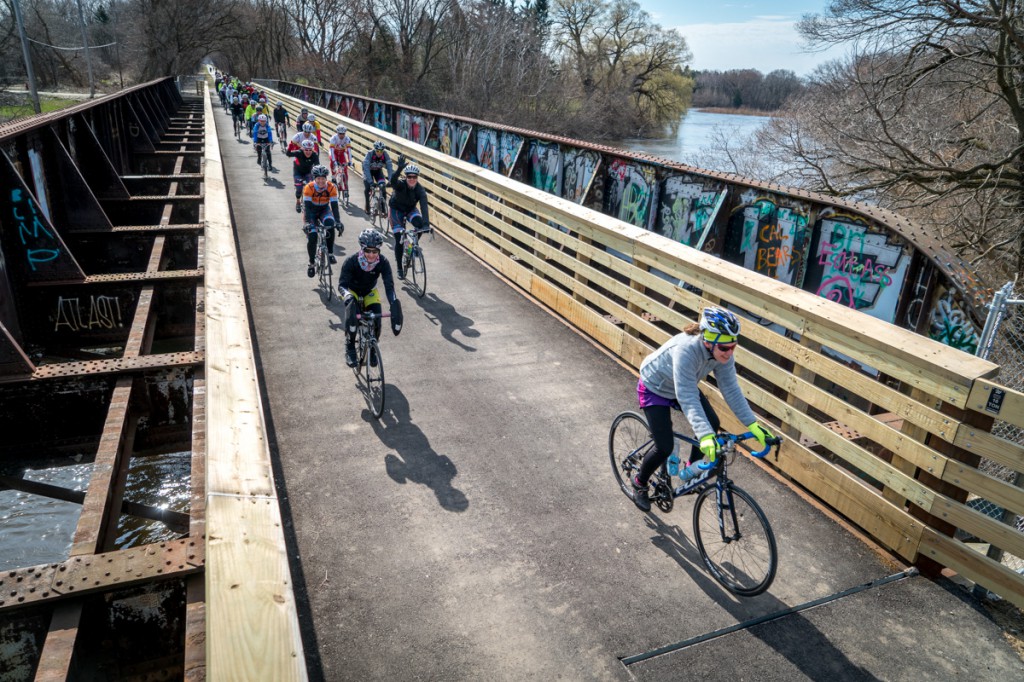 It still amazes me that so many people show up for a cold, hard ride with smiles on their faces.

The ride north was pretty uneventful. The group stayed mostly together, averaging about 18 mph, within the promised pace of 15mph-20mph. I didn’t do a head count, but I will say that we had a significantly higher intellect on this ride than previous suffer-fests, as about 25 people decided to stop for coffee in Port Washington and turn around then.

“Just warning you, a bunch of us are going to warm up with coffee and turn around because we have to ride back into that big headwind,” a well-spoken rider told me.

I scrunched up my face in in confusion as I watched him and the more practical of fellow Classics riders slow and veer off toward cups of steaming Mochas and Lattes. What the heck, I wondered? Is that an option? You mean you don’t want to ride the last 20 miles so you can say you made it to Belgium? I just didn’t understand, but then I never said I was that bright.

Our original destination for the group photo in Belgium was to be the Luxembourg American Cultural Center, but when we rolled off the Ozaukee Interurban Trail smack dab in front of a bright orange Belgium Hardware and Beverage, I could not convince the group to pedal another yard. And honestly, I was happy as a mussel myself. After all, what is not to love about a hardware store and liquor store all in one? 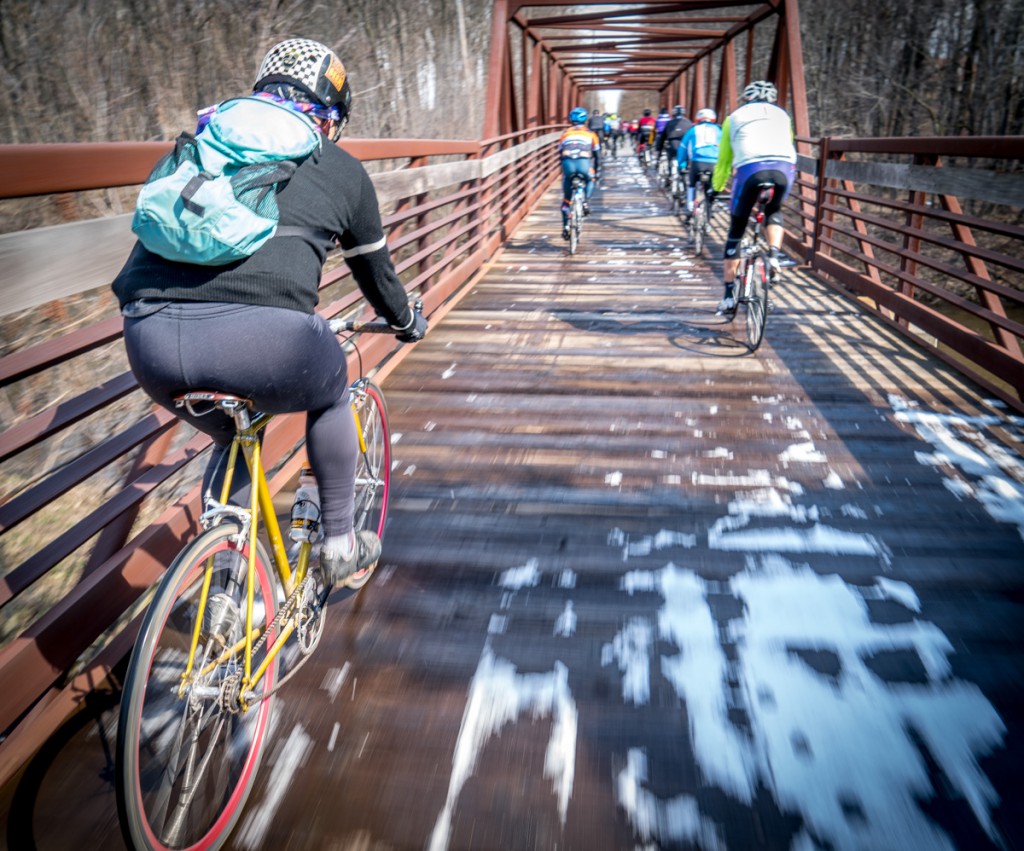 Yes, that is a single speed. We had a few of those and a fixie, all of who finished ahead of me on my carbon geared bike.

Not only that, this one has local flair in spades. When was the last time you saw a used eye-glasses depository? Very vintage looking, and a really great idea. I was also enjoying the wide ranging cultural offerings posted on the door of the of the store. Everything from all-city rummage sales, to pancake breakfasts, to a job at a dairy farm and even a photography show. If there were only a hotel in Belgium, I might vacation there. 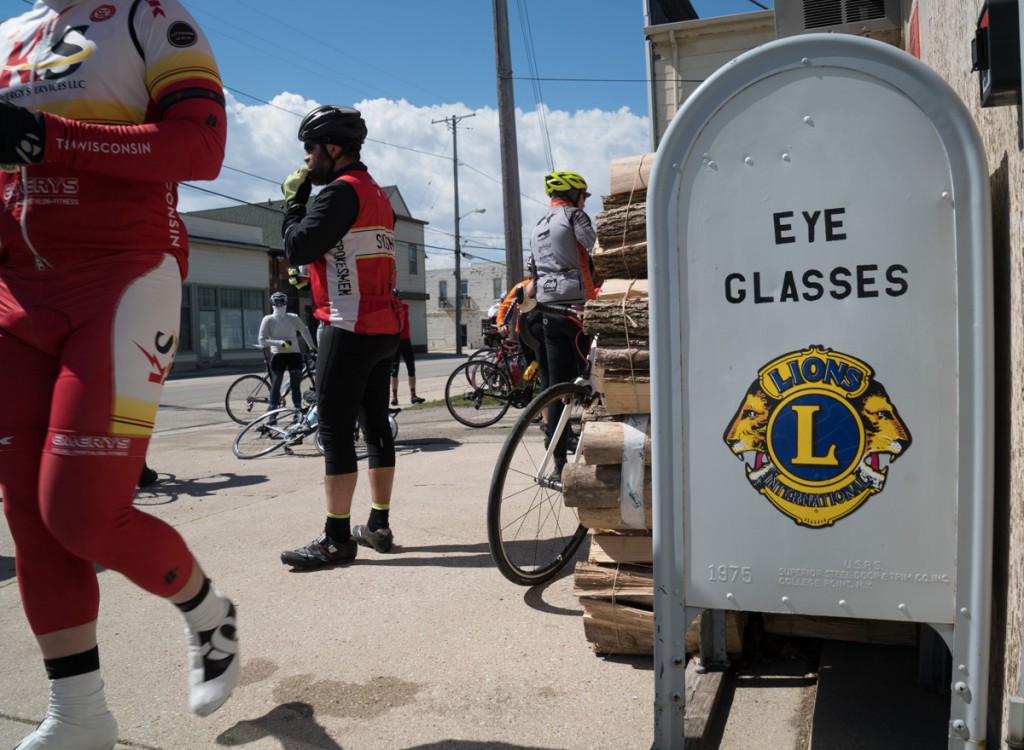 What a great idea!

With calls of nature answered, healthy hydration purchased, snacks consumed and an image memorializing the trip in the can, our stalwart bunch headed south into the cold, raging headwind. It did not take long for the wind to take its toll on the peloton. Anyone who fell off the lead group by even a bike length was out of luck. And the Tet de Course was moving at a pace at which most of us could not hope to even hold a wheel. I can clearly picture the point on the ride when that mental elastic snapped, and I gave up trying to hang with the fast group.

I’d love to hear when the last riders got back to the shop. I know these rides are advertised as “no-drop” but the wind today just made it impossible to keep a big group together. Most people seemed to end up in small groups of 4-10 riders with similar abilities who worked together to get back. Towards the end, pretty much everyone said they were pushing themselves to their limits. I know I rolled into Fyxation on fumes. You know you are gassed when you find yourself standing to pedal up a 3 percent grade on Humboldt!

Different from previous rides, Nick Ginster and Steve Mehne from Fyxation had the grill going with hot bratwurst, kraut, beer, Gatorade, fruit and cookies waiting when the tired riders pulled up. Since the temperature had by now risen to around 70 degree, it was the perfect end to a long ride. All-in-all, everyone I spoke with seemed to have a great day out on the bike.

Finally, some insights into the Trek-Segafredo Team’s philosophy on riding the real Spring Classics. Sounds like we are on the same page, if not the same continent.