By Wyatt Massey, Milwaukee Neighborhood News Service - Apr 15th, 2016 10:44 am
Get a daily rundown of the top stories on Urban Milwaukee 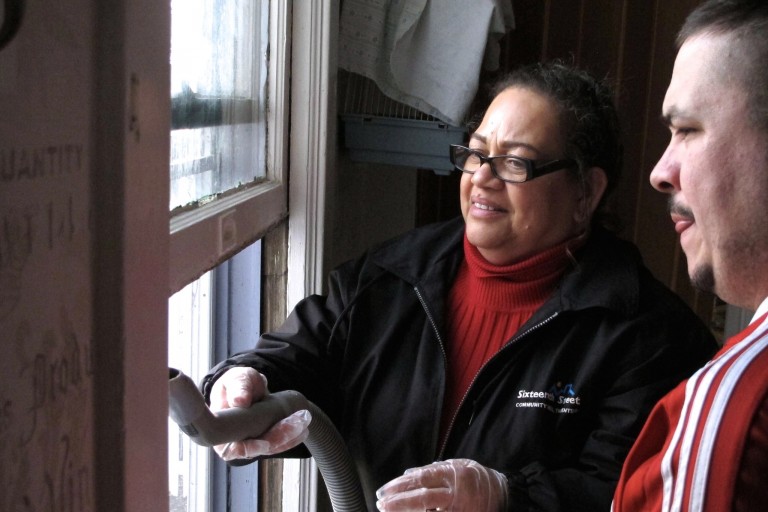 Carmen Reinmund, lead program coordinator at Sixteenth Street Community Health Centers, vacuums dust from the windowsills of a South Side home with a special filter. She presses strips of duct tape over chipped paint. Reinmund is completing temporary lead abatement work at the home of Armando Martinez and Ana Sanchez, who have two young children. The family’s home, built in 1908, has lead paint, the leading cause of lead poisoning in Milwaukee.

Martinez and Sanchez recently became aware of the danger of childhood lead poisoning and turned to Sixteenth Street’s Community Lead Outreach Program for help. Reinmund informed the couple that they do not qualify for a lead abatement subsidy from the city because of where they live.

The Milwaukee Health Department’s current lead prevention program is focused on six ZIP codes on the North Side. The city has not provided subsidies for lead abatement citywide since 2014. Groups such as Sixteenth Street and the Social Development Commission (SDC) now focus on temporary abatement services, education and blood tests.

Ben Gramling, director of environmental health at Sixteenth Street, explained that the clinic has an agreement with the health department to continue providing information, but the subsidies Sixteenth Street formerly offered residents are gone.

“The health department made the strategic decision to drive much of its resources into the North Side ZIP codes that have not seen the same kinds of decrease in lead poisoning prevalence rates that we’ve seen on the South Side,” Gramling said. The six North Side ZIP codes account for 75 percent of lead-poisoned children, according to the city.

The average cost of window replacement through the city’s Childhood Lead Poisoning Prevention Program is $5,246, according to Sarah DeRoo, health communications officer at the Milwaukee Health Department. Residents in the six ZIP codes who qualify for the program can reduce their cost to an average of $765.

Martinez and Sanchez live in the 53215 ZIP code, where the average residential property was built in 1920, according to data from the city. An outreach worker from Sixteenth Street found lead paint in their home, but the most recent blood test showed that the children do not have elevated blood lead levels. Martinez and Sanchez intend to apply for a loan to remove the paint from the STRONG Homes program.

Reinmund suggested the program to the couple as an option, although it is not specifically designed to pay for lead removal. The city’s Targeted Investment Neighborhoods program is another option, but it is only available in specific areas, and the family’s home is not in one of those communities. The programs are practical choices for some residents because they can get loans to do more renovation work than just lead abatement, Gramling said, but residents wanting to do small, specific projects can have trouble getting loans.

“Our experience is showing that we need more options for homeowners,” Gramling said. “What we would ultimately like to see are options that might support smaller grants or loans to homeowners that might cover costs.”

Reinmund said she knows about one successful TIN applicant from the approximately 30 people she helped apply since the citywide lead abatement subsidy ended. 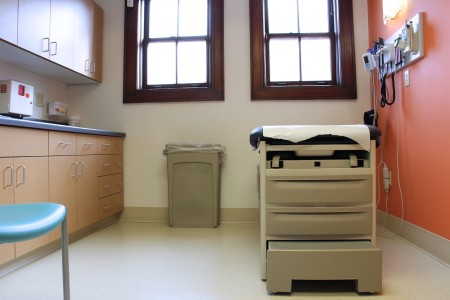 Sixteenth Street Community Health Centers is one of several locations across the city that offers blood testing for lead poisoning. Photo by Sophia Boyd.

About 25 property owners Reinmund worked with completed a lead safe renovation course to service properties themselves. The class costs approximately $260, Reinmund said, but people in the 53204 and 53215 ZIP codes can take it for free.

The Sixteenth Street Health Centers’ lead program tracks about 1,700 families and 2,500 children. Outreach workers from the clinic set goals with families to lower children’s blood lead levels or lower the risk of exposure. A follow-up visit is typically done within six months of the first visit, depending on the child’s blood lead levels and age.

Sixteenth Street offers lead testing at three clinic locations, during home visits and at various community events throughout the year. In-home tests are paid for by a state grant. Testing in clinics is typically covered by insurance or the clinic itself, if the family is uninsured. Other testing locations across the city include primary care providers, Women, Infants, and Children clinics and some Head Start programs.

Following the Centers for Disease Control and Prevention’s recommendation, Sixteenth Street has used 5 micrograms of lead per deciliter of blood as a benchmark for interventions such as home visits since 2012. The city health department makes home visits when the blood level is above 10.

Measuring at a lower threshold allows outreach workers to make a difference sooner, Gramling said. “We are able to provide cost-effective services to kids who are below that threshold of 10 with the intent of keeping them below 10.”

Ofelia Mondragon, lead hazard reduction program manager at the Social Development Commission, said she is disappointed that lead abatement programs do not have the funding to help more people. She said that ending the subsidy program throughout the city took away potential help from “thousands and thousands” of families with young children.

Gramling added that awareness about the risk of lead poisoning has not reached everyone in the city, which is why the clinic continues to educate residents.

“Quite a few people have a very limited understanding, or no understanding, of the fact that lead is still a problem,” he said. “It still very much exists and will continue to exist for an extended period of time, and our children are at risk.”