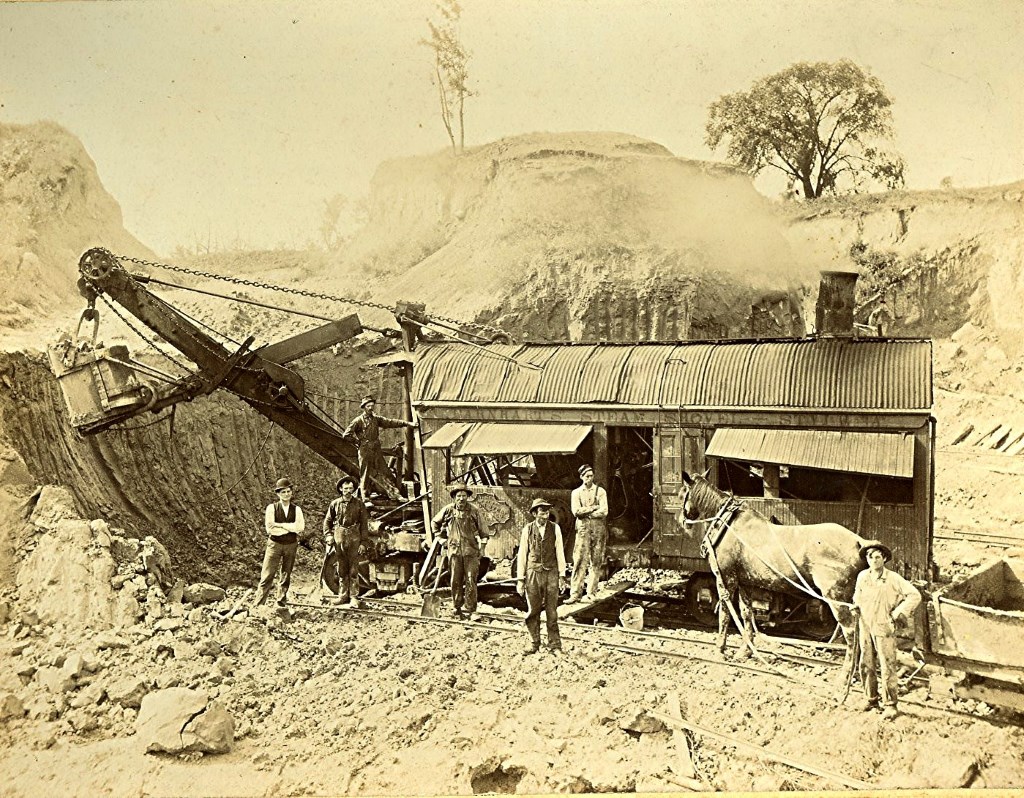 The best deposits of the clay required to produce Cream City brick were located along the top of the bluffs that edged the Menomonee Valley. While most of the labor required to produce the brick was strictly manual, in the mid-1880s that would begin to change.

This is a view of an early piece of equipment used at one of the brickworks. It was called Barnhart’s Steam Shovel. It was manufactured by the Huber Mfg. Co., located in Marion, Ohio. The earliest model was produced in 1883 and it is likely that the Barnhart shovel seen in this photograph is from that year.

The bluffs along the valley at that time were quite a bit steeper and the removal of the clay deposits would facilitate future real estate development. Also, as the valley below was a swamp at that time any additional fill coming from unused dirt was very welcome.

The steam shovel’s invention led its inventor Henry Barnhart to join forces with Edward Huber (whose helped finance and patent it) and George W. King to create the Marion Steam Shovel Company in 1884. The shovel set the record in July 1908 for moving 53,000 cubic yards of earth in 25 eight-hour days and was also used in building the Panama Canal. The Marion company was located just 15 miles from Bucyrus Manufacturing, which also started a steam shovel line in Bucyrus, Ohio; the company soon relocated to Milwaukee after Bucyrus city officials refused to approve expansion plans for the company.

By the turn of the 21st century two Milwaukee companies, Joy Global (formerly Harnischfeger) and Bucyrus International would together manufacture most of the heavy, earth-moving machines used in strip mining coal. In 2011 Bucyrus was purchased by Caterpillar for $7.6 billion. By then, few knew the history of companies like Bucyrus and Joy Global went back to 19th century brick making in cities like Milwaukee.