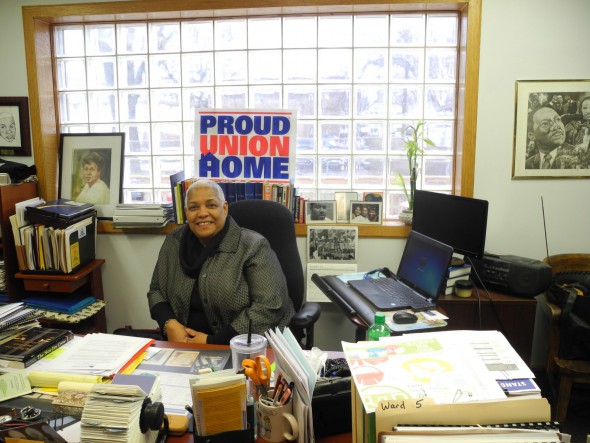 Sheila Cochran recalls how Rufus King High School changed from predominantly white to nearly 100 percent African American when she was a King student in the 1960s, due to white flight. “The neighbors ran as fast as they could,” says Cochran, Chief Operating Officer of the Milwaukee Area Labor Council. “People were terrified of black kids coming into the neighborhood. The problem was how people perceived each other at the time.”

While Rufus King is today a success story, a college prep school that serves a diverse student body, Milwaukee is still seen as segregated by many black leaders, who view that as a key consideration for city leaders looking to serve predominantly black neighborhoods. “We know that we have a very segregated city – one of the most in the country, and it’s important that a lot of attention be given to those parts of the city that have been struggling,” says Rep. David Bowen (D-Milwaukee).

While downtown Milwaukee is currently experiencing a boom in development projects, Krumm and Davis spoke fervently about the need for “catalytic” projects and investments to take place in other neighborhoods of the city. “The Northridge area was thriving at one point, and now is becoming more and more desolate,” Davis notes. Common Ground is pushing the city to invest into the Northridge neighborhood, and other distressed areas. They would also like to see improvements to athletic facilities for kids in the city. 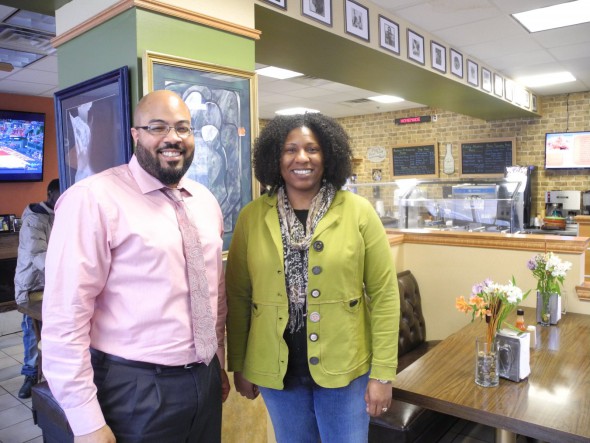 Keisha Krumm and Pastor Will Davis. Photo by Laura Thompson.

Hollmon sees black unemployment as a huge issue, but says the mayor has taken positive steps. “He recognizes that in order for us to have a great city, you can’t have one part of the city prospering and another part in despair.” The mayor and the Common Council pushed the firm constructing the new Northwestern Mutual high rise to hire workers from the central city, including from African American-owned businesses. They required that at least 40 percent of the work hours go to city residents, with an emphasis on the underemployed.

Barrett has also spearheaded several initiatives to give young people access to jobs, including Earn and Learn, which gives high school students and recent graduates access to summer jobs with city government, nonprofits, and small businesses.  Bowen took part in the program himself, reflecting, “I’ve witnessed firsthand the impact that young people earning their first job experience can have on creating that pathway for them to get to the workforce.”

Adds Hamilton: “Many people have no idea that all these jobs exist in forestry, mechanics, the City Attorney’s Office, being a driver for snowplows… Exposing high school kids to that kind of opportunity is a tremendous step in what city government can do.” For unemployed and underemployed adults in the central city, there is another city program called Compete Milwaukee, which provides temporary jobs, career counseling, and training to help them to get back into the workforce.

A key challenge is access to private sector jobs, because many are located in Waukesha County and other outlying areas. Though county government is in charge of public transportation, Barrett has been an advocate for extending bus routes. According to Cochran, public transit is one of the areas that Milwaukee lags most dramatically behind otherwise similar cities. One obstacle to expanding public transportation options in the city is opposition from the state government, which is focused much more on building highways. As Cochran laments: “Attitudes about the City of Milwaukee are as if we are a drain on the entire state. But this is the economic engine of the state and without investment in it, you fall apart.”

One of the major challenges to inner city neighborhoods is a daunting number of vacant homes. According to Hollmon, “through the mayor’s initiatives, a number of blighted properties have been demolished, because residents don’t want eyesores in their community. They attract vandalism and violence.” In some cases, those newly empty lots have been turned into “pocket parks” for neighboring residents.

Since the housing crisis in 2008, Common Ground persuaded five banks to invest $33.8 million in the Sherman Park neighborhood, which they have used to rehabilitate and remodel 70 houses, making them habitable again. Krumm would like to see that model exported to other areas of the city. The city has several programs to help rehabilitate foreclosed and vacant homes. The city sells foreclosed homes very cheaply, but requires new buyers to bring each property up to code. Bowen notes that the city has sold over 1,000 vacant properties so far. However, Cochran says the state legislature – with pressure from banking lobbies – is trying to end the city’s sales of foreclosed homes.

The city also offers something called the Homebuyer Assistance Program, which gives financial assistance (in the form of forgivable loans up to $20,000) to buyers of city-owned homes so they can make the necessary repairs. Of the Homebuyer Assistance Program, Cochran says many people would not be able to afford mortgages without it. Mitchell speaks positively about the new home and apartment construction facilitated by the program, but says the city do a better job of using the construction and revitalization projects as a way to employ the city’s homeless population. “It could help train homeless individuals to work on revitalization of vacant properties that they or others can move into. It could be a real win-win for the city.”

One of the major challenges facing the central city is its outdated and aging infrastructure. Hamilton says there’s a misperception that the African American community is getting worse services than other neighborhoods in the city. “When we take a look at the data, and this is something I say almost reluctantly, I think we’re getting equal if not better responses from city government.” The real problem, he says is the infrastructure: The north side has an older electrical grid than the south side, so it is fairly common to have deteriorating circuits that lead to blackouts.

Another problem is the condition of the streets in the neighborhoods he represents. The Common Council passed a “wheel tax” — $20 added to each vehicle registration fee — in 2008, over Mayor Barrett’s veto. Hamilton says this was an important move towards equity, because prior to the wheel tax, streets could only be re-paved if each abutting property owner decided to contribute towards the costs. This meant that streets in poorer areas of the city became riddled with potholes, giving an impression of neglect. “Because everybody drives on that road, it makes more sense that everybody share in the responsibility of keeping our infrastructure up to par,” says Hamilton.

Another infrastructure challenge that Hamilton and others would like to see the mayor take a more active role in addressing is the replacement of the 70,000 lead lateral pipes throughout the city. Krumm advocates a large-scale project similar in scope to the Works Progress Administration of the New Deal. Replacing the lead lateral pipes “could be an opportunity to do a massive public works project in the city that could put every black man that wants to work back to work for decades,” says Krumm.

Perhaps the biggest lightning-rod issue among black city residents is community-police relations. “No matter who you talk to in the African American community, they want the police to be respectful and courteous in carrying out their responsibilities to provide a safe community,” says Hollmon.

Krumm describes two sides of the police. “On one side, there are neighborhoods that when the police have a presence, kids come out and play. They feel safe… That’s positive community policing. The other side is the fear that people have of the police. When you’re on the north side, if you’re black, you get pulled over.”

Davis remembers the police from his childhood fondly: “They had baseball cards, and I would run to the cop car, excited to see the police. It was that relationship with the youth which has changed.”

According to Bowen, in too many cases, “young people of color are more often assumed to be doing wrong than to doing good.” There is a disparity in the number of stops and arrests, with higher penalties for similar crimes often going to African Americans, he says.

Bowen, Hamilton, and Cochran all brought up the idea of reclassifying certain crimes so they have less dire consequences. Cochran uses the example of cocaine versus crack cocaine use: “You get a higher sentence if you’re caught with crack cocaine than with cocaine, and the only difference is baking soda.”

According to Hamilton, drug use among white people is often responded to with compassion and treatment plans, whereas it is often met with stiff penalties when black people are the drug users. “We’re arresting a lot of people that are not violent criminals, that are not really contributing to fear and disorder, and yet we spend a lot of time making arrests and criminalizing that behavior,” he says. 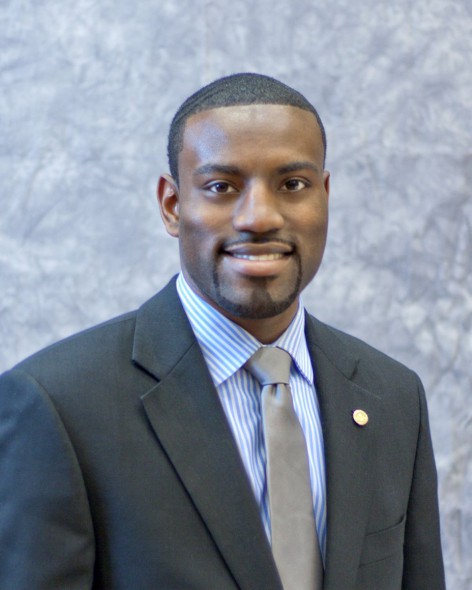 Classifying drug use and other crimes as felonies can have long-lasting consequences for people trying to get their lives back on track. Cochran has argued that firms should “ban the box” asking about previous criminal convictions on application forms, because “if that little box is not going to get you through the door for an interview, sometimes you turn away really good people.” She describes a “gerbil wheel” of reoffending, where people often emerge from prison without money to pay a driver’s license reinstatement fee. If they are lucky enough to be offered a job, the temptation to drive without a license at first can be very strong.

One program that’s been having a positive effect in the black community is something called the Milwaukee Fatherhood Initiative. This program helps young men go back to school, regain a drivers license, and to make timely child support payments. “The Fatherhood Initiative works to help young men deal with some of the barriers and issues that keep them from being gainfully employed, and helps them avoid jail,” Hollmon says. Hamilton is a strong supporter of the Fatherhood Initiative, but argues that “a larger investment into that entity is critical.”

In short, while black leaders we interviewed believe the mayor could and should do more to address concerns facing black residents and predominantly black neighborhoods, most believe he has taken positive steps in the right direction. Bowen says he does not agree with everything the mayor does, but offers this conclusion: “Compared to Bob Donovan, who wouldn’t be inclusive of folks in the black community, I think he’s been steady.”