Community Must Respond to Gun Violence

So say the speakers at Neighborhood House summit, discussing rise of gun violence in the city.

By Jabril Faraj, Milwaukee Neighborhood News Service - Mar 22nd, 2016 11:02 am
Get a daily rundown of the top stories on Urban Milwaukee 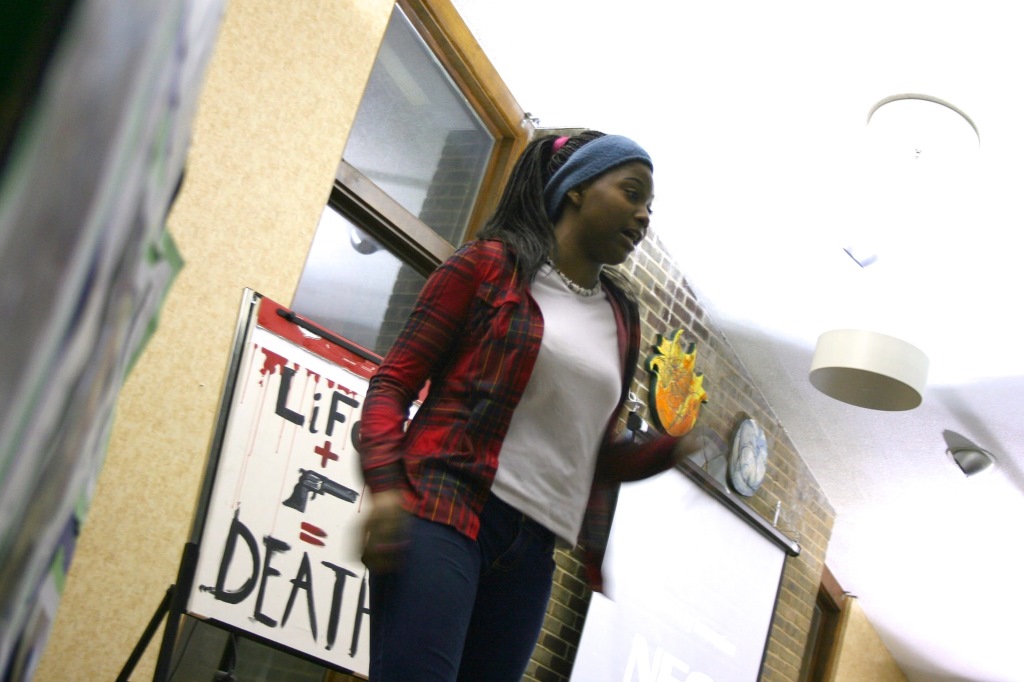 Kaliah Hughes-Bester, 15, performs a poem she wrote called ‘Behind the Gun.’ Photo by Jabril Faraj.

On Memorial Day, 1996, 21-year-old Shatitia Austin was shot through a window in her home — she and her 9-month-old daughter were the only ones there. Austin had been targeted by a neighborhood gang member she knew, in retaliation against her daughter’s father. The single shotgun blast severed her carotid artery and sprayed shrapnel from the top of her head to her chest.

She had emergency surgery and was in the hospital for seven days, during which she was unable to speak.

Austin, who is 40 now, has begun to share her experience with young people to impress the effect gun violence can have on someone’s life. “I want to let them know that it’s not about what’s out there in the street, it’s what you have in your heart and what’s in your home. If you have somebody who loves you, you cling to that person; you let them know that you love them back. Don’t just let life slip by. Every day is a learning experience.”

Last year was uncharacteristically violent in Milwaukee; the number of shooting deaths was particularly high. There were 152 homicides in 2015; 125 of those involved a gun. The overwhelming majority of victims were African-American and 61 percent of those killed by guns were under the age of 30. Last year, nine people under 18 died from a gunshot.

In December, Joshua R. Words, an 18-year-old who had worked at and participated in programming at Neighborhood House of Milwaukee, was shot and killed only blocks from the neighborhood center on the west side. 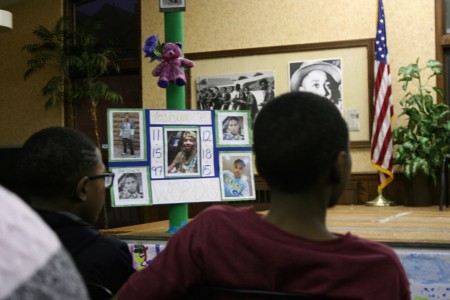 A collage in memory of Joshua Words, an 18-year-old who was well known at Neighborhood House, graced the stage. Words was shot and killed in December. Photo by Jabril Faraj.

Recently, Neighborhood House hosted the third annual LET MY CHILDREN GROW: Youth Summit on Gun Violence, organized by center youth. The event is a way to give young people a voice on the issue of gun violence, said James Austin, Shatitia’s brother and a teen program supervisor at Neighborhood House.

“We’re speaking too softly to this issue,” said Austin. “Yeah, there is gun violence, and the drugs, and the crime and things like that. But, the real issue is us sitting down and not speaking out about it, not doing anything about it, allowing it to happen.”

The event included vocal and spoken word performances by teenagers and testimony by other community members that addressed the effects of, and impetus behind, gun violence.

Kaliah Hughes-Bester, 15, gave an impassioned spoken-word performance of a poem she wrote called “Behind the Gun.” Hughes-Bester said she has family members who have been the shooter in violent situations, and she felt it was an important point of view to explore since people rarely try to understand the perpetrator.

“Not only is there the victim, but there’s also another victim,” she said. “No person in their right mind would just go out to shoot people.”

Otis AustinBey, who spent three years in prison for a gun offense more than 10 years ago, talked about the thought process that leads to picking up a gun. AustinBey, 34, who is related to James and Shatitia, said he was dealing drugs to feed his family but ended up attracting negative attention.

AustinBey said guns are not the answer; “knowing yourself is the answer.” About three years ago he became an active member of the Moorish Science Temple of America, an organization with ties to Islam and the Moorish people of North West Africa.

He said knowing yourself starts with loving yourself. AustinBey said he studies himself on a regular basis and makes sure to reflect on any decision before acting. “I just got to thinking, turned my TV off … stopped being misled by misinformation and illusions — that’s what changed my thoughts,” he said.

“We’ve got to get back to that village”

James Austin said the Milwaukee community needs to work with police, and “dispel the rumor” that all officers are bad. He also said the solution is not to put people behind bars. “Those young men and women that are mis-educated, we’ve got to start pulling them back in,” said Austin. “And, it’s going to take a community.”

“Milwaukee has to embrace it. That means from the law enforcement, to government … to the homeowners, the business owners, the renters,” he said. “Everybody has to buy into that same notion.”

Organizers said the Milwaukee Police Department was scheduled to make a presentation at the event; no officers attended.

Austin lives near 26th Street and Capitol Drive and witnessed two shootings last summer. He said it’s important that every community member feels a responsibility to help raise the next generation. He said if young people are doing something wrong, it’s the community’s responsibility to teach them; If that person is doing good, then they should be encouraged.

Both James Austin and AustinBey said the idea that some parents don’t want other parents to provide guidance to their children has been counterproductive to creating a cohesive community. “Really, it’s our children,” said AustinBey. “We live together.”

James, who has six kids, said, “My fatherhood don’t stop within my house. My fatherhood never stops. It don’t matter where I’m at — I’m still a father.”

Curtis Ingram, 14, was one of many young black men to attend the summit. Ingram said, while he understands that the conditions and treatment African-Americans have faced plays a role, he doesn’t understand why young black people are hurting each other.

Ingram, who said he wants to be an engineer so he “explore the world and create things” called the stories he heard at the summit “tragic.”

AustinBey said it’s important for people to reconnect with each other and learn from the experiences of those who have been hurt by gun violence. “We need each other,” he said.

Timberley Brown, 16, one of the youth who helped organize the summit, challenged young people to stop talking about change and take action. “The smallest person can be a change,” Brown said. “It only takes one person.”

Today, Shatitia Austin has three children — her daughter is 21, she has a 19-year-old and her youngest is 7. Though she gets intense headaches and the shrapnel in her body still hurts from time to time, Austin said she tries to find the positive in any situation because she knows how fragile life can be. She’s grateful she has been able to see her children grow up and progress through school.

“I am so blessed, every day, to live my life to the fullest,” Austin said. “And, I try to keep a smile on my face at all times.” 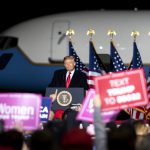 City Hall: 120 Officer Cut May Be Just The Beginning by Jeramey Jannene