By Wyatt Massey, Milwaukee Neighborhood News Service - Mar 16th, 2016 11:16 am
Get a daily rundown of the top stories on Urban Milwaukee 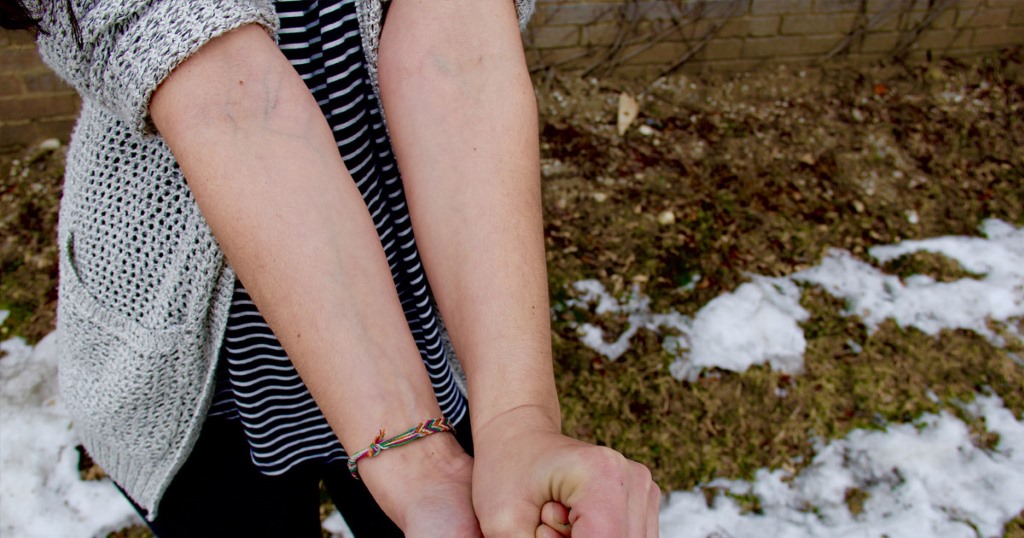 Six years ago, Sarah had a simple wish. Every time she stuck the needle in her arm and felt the heroin rush through her bloodstream, she hoped it would kill her.

“I prayed to die every time I used,” said the Milwaukee college student, now 26. “It wasn’t killing me and I was getting pissed.”

Moving between her separated parents on a weekly basis, she had an unstable home life when she was growing up. Sarah (not her real name) felt trapped, with an abusive family in a small Wisconsin town. The Vicodin she stole from her grandparents at age 12 was her first coping mechanism. At first, drugs were an opportunity to escape from her situation. As her addiction grew, she moved from pills to heroin, which she hoped would help her to escape life itself.

Over the years, Sarah attempted rehab multiple times with no success. Then, the day after her 20th birthday, she prayed to God for help overcoming addiction because she knew she could not do it alone.

Sarah did get sober and, in the six years since, the fading scars on her arms from injecting heroin serve as a reminder of a past life. She doesn’t look the part of a former addict; her bright eyes and soft smile hide her true story.

“It’s an internal struggle. I feel like I live two different lives,” she said. “With heroin addiction, you either get sober or you overdose and die.”

While Sarah emerged from the darkness of heroin addiction, others have fallen in deeper. Milwaukee is one of many cities nationwide where heroin use is increasing. The number of people dependent on or abusing the drug swelled by 174 percent across the country between 2002 and 2013, from 189,000 to 517,000, according to the Department of Health and Human Services. 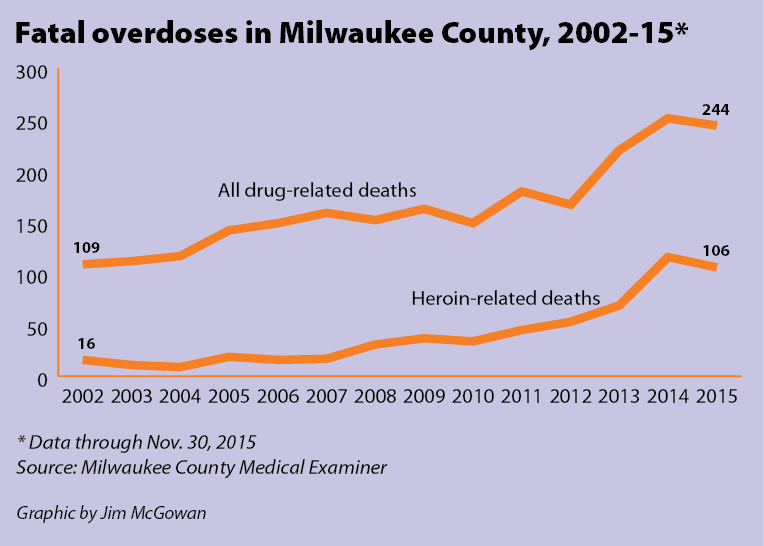 In 2014, there were more deaths in the county from heroin overdose than motor vehicle fatalities and homicides combined, according to data obtained from Michael Murphy, Common Council president and District 10 alderman.

Drug death reports from Milwaukee County reveal that more than 65 percent of those killed by heroin between 2012 and 2015 were white. While heroin abuse affects people throughout the county, users tend to purchase the drug in Milwaukee.

In the wake of the destroyed lives, scarred families and high cost to taxpayers, Milwaukee-area leaders are grappling with the best way to deal with the surge in heroin use. There is no single cause, nor is there a single solution to treating it, experts say.

Fatal overdoses in Milwaukee County by race of victim, 2002-15*

Sarah thought everyone in her hometown of Mukwonago, Wisconsin, was judging her family’s poverty. Sarah knew people noticed when her family shoved pink Styrofoam around the windows in the winter because they struggled to pay the heating bill.

Sarah’s mother suffers from bipolar disorder, and Sarah never knew what to expect when she came home. One day, her mother was sprawled across the kitchen table getting a tattoo; another time, she was slicing the wall with a chainsaw. The alcoholics her mother dated abused Sarah. “The cops were at our house four nights a week,” she said.

Abusing prescription drugs was Sarah’s form of rebellion, both an escape and a pleasure. The years of pain and feelings of entrapment finally boiled over one day at age 15 when she hit her mother. Shocked, Sarah’s mother claimed abuse and gave up custody of Sarah.

Sarah then moved in with her father, transitioning from Mukwonago, a town of about 7,500 people, to near Milwaukee, a city 80 times larger. On her second day in the city, Sarah got into an argument with her father and burst out of the house, later getting lost along Greenfield Avenue. She met “David” on her walk. The 21-year-old man was a drug dealer and a prescription drug and heroin user who would later become her boyfriend. When he took large doses of OxyContin, so did she. When he began shooting up heroin, she did the same.

Sarah bought and used heroin on the South Side, near where she lived and went to school at West Allis Central High School. Some days she skipped class; other days she was kicked out. Either way, most days she could be found shooting up in a friend’s house across the street. At night she would go to her boyfriend’s house to continue using. It was not uncommon for her to shoot up and pass out in gas station bathrooms. She graduated high school addicted to heroin.

Sarah lied to her grandparents to get money they believed she was using for rehab. She also stole empty kegs from the restaurant where she worked to get scrap metal money. Nothing would stop her from getting a fix, not even when a heroin overdose killed a friend who was 15. Everyone in their group knew the dangers of overdosing, she said, but they could not stop. Everything, even her friend’s death, was a reason to get high. She thought he would have wanted her to keep using.

Treatments did not work. For two years, doctors gave her Suboxone, a prescription painkiller often prescribed for addicts as an opiate substitute, but she sold it on the street to buy more heroin. “The problem for me wasn’t the drugs, the problem was in me,” she said. “The drugs were an outgrowth.”

The last time Sarah attended rehab, she was part of a group of 12. Workers at the detox center told them that, statistically, only one of the 12 would stay sober. “I don’t have many people in my life from my old life,” Sarah acknowledged. Other users ended up in jail, moved away or died. She has attended many funerals. Years of hearing bad news about those close to her make her voice sound void of emotion. “My friends die a lot.”

One way Sarah has coped is by being an advocate for other former users. “It’s the only way that makes any of it worth it,” she said.