And new Middle Eastern restaurant for the East Side. 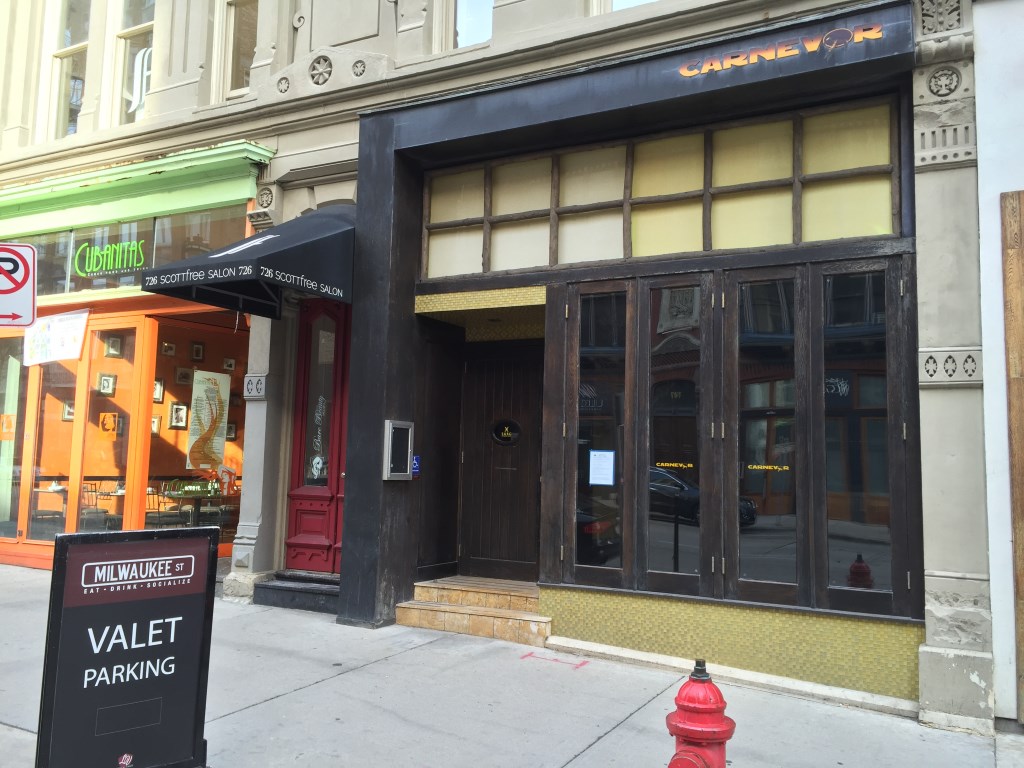 Owners of Merriment Social in Walker’s Point are planning to open a second restaurant in the space that once held the old Carnevor. Andrew Miller, the chef at Merriment, and business partners Cameron Whyte, and Samuel Emery are planning to open Third Coast Provisions at 724 N. Milwaukee St. Carol Deptolla at the Milwaukee Journal Sentinel has the story:

“Third Coast Provisions will have an oyster bar and serve fish and seafood in modern preparations, including fish from around the Great Lakes, Miller said…’We feel that dining driven by seafood is an underserved experience in Milwaukee, especially in a creative, modern restaurant that can push limits and utilize pristine fish from the Great Lakes region and beyond.'”

The chain that grew from a hot dog cart in New York City and now franchises a limited menu of Middle Eastern food (gyros, chicken, falafel, baklava) now has locations in nine states and claims it is developing 200 franchises internationally. No word about franchises on the moon, but hey, they are coming to Milwaukee, as our press release recently noted:

“The first unit is set to open early Summer 2016 on the East Side of Milwaukee, a block off of the UW campus at 3133 N. Oakland Ave, the release noted.”

The new restaurant is expected to open later this month in Oconomowoc. It will take over the space that once held Porticello, at 685 E. Valley Road. A more fine dining space will be created in the upper level of the building and a pub in the lower level. Deptolla is on the story:

“The restaurant, at 685 Valley Road, would serve menu items such as steak and pastas upstairs and burgers downstairs… BuenaVista also plans to sell menu items to go, expected to appeal to boaters docking at the eight slips the restaurant wants to add by early summer

Two brand new locations of the famous restaurant chain will be opening in southeast Wisconsin on Thursday. One will be located on 150 W. Town Square Way in Oak Creek. The second will be located at 5201 Washington Ave. in Racine. OnMilwaukee.com’s Lori Fredrich reported on the events for the openings.

“In celebration of the two new stores, existing Chick-fil-A locations will give away free Chicken Biscuit breakfast sandwiches on March 8 from 6:30 a.m. to 10:30 a.m. No purchase is required, and the giveaway is limited to one per customer.”

The building that once held the Z Pantry convenience store at 2219 N. Farwell Ave. is currently on lease and a new Subway location will be opening there. They are currently hiring. Subway, which opened its first store in Bridgeport, Connecticut in 1965, is now the world’s largest submarine sandwich chain with more than 44,000 locations around the world and several dozen in Milwaukee. As for the menu, we’ll let Subway’s website take it from here:

“Simply choose the sandwich your taste buds have a hankerin’ for, then build it just the way you like with your favorite freshly baked bread, crisp veggies and sauces.”

Located at 939 S. 2nd St., the restaurant has launched a new menu that the owners and chef are calling a “small-bites menu” and aimed at those who choose to lounge at the bar. Deptolla reported on the menu changes.

“Like the regular menu, chef Chad Meier said, the plates have global flavors and change frequently. The menu lists from 18 to 25 plates, typically $3 or $4 apiece.

Guests can order the small bites in the dining room, too. Meraki a few months ago revamped its bar program, hiring Shannon Stitch to oversee the changes.”