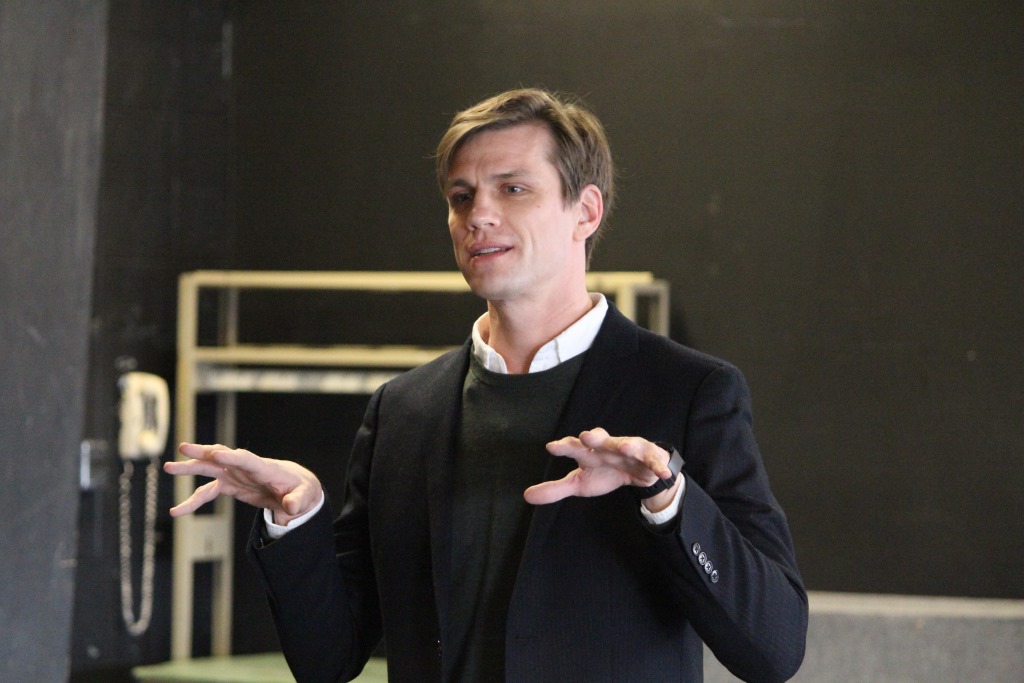 Last week the touring production of Cabaret played at the Marcus Center for the Performing Arts. It was a strong, sexual, poignant, risqué production that assailed the senses. But the production was not the only contribution to the city’s cultural scene. The Marcus Center also arranged for Broadway actor Lee Aaron Rosen to visit Milwaukee High School of the Arts (MHSA)

“We have a specialized workshop these actors put on,” says Bridgett Gonzalez, director of development and community engagement for the Marcus Center. It’s part of the center’s Arts Connect program, which helps bring professional theater to Milwaukee schools.

“Last year we held the same workshop at Riverside University High School and we’ve continued working with some of the students,” Gonzalez says. ““If they have a passion for the arts, we hope to inspire and cultivate that passion. The professional actors appear to love it. They enjoy sharing their experiences with students and talk about their careers.” 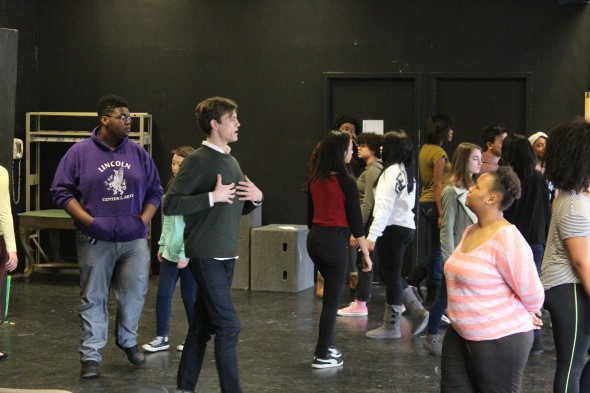 Last Thursday, Gonzalez chaperoned Rosen to MSHA, one of Milwaukee Public Schools’ magnet schools, where all students must declare a particular arts major, which can include a major in theater. Rosen, who plays the male lead in Cabaret, American writer Clifford Bradshaw, did a participatory workshop, in which 25 students explored how an actor uses physical and vocal choices to create and influence a character. Students learned how improvisation, tableau, movement, posture and pitch could be adjusted to create a fully realized character onstage.

Rosen boasts a hefty resume, having appeared in movies like Saving Private Ryan, TV shows like “Nurse Jackie” and “The Good Wife” and Broadway productions The Big Knife and The Normal Heart.

After a brief introduction, Rosen grouped the students into a large circle. He led them in stretching and breathing exercises to relax. Then Rosen began the exercises. First, students walked around randomly, avoiding eye contact.

“Just use your peripheral vision,” Rosen says. “We do this all the time on the street or when we’re focusing on our I-phone. We just don’t realize it.”

The gist of this exercise is to start with a blank slate, to create your individual character from scratch — from the shoes up.

Rosen asked students to cultivate their own walk. They could exaggerate shoulder motions, or others were encouraged to  accentuate the movement of their hips. According to Rosen, all of this helps build a character in the actor’s mind. Finally, Rosen had them develop a backstory and physical voice for their characters. Nothing too elaborate, just a sketch in their minds to mold the proverbial clay. Within the 50 minutes of class time, Rosen helped students create 25 new characters, personality traits, backgrounds and stories.

“As class went on, I noticed a lot of the students relaxing,” Rosen says. “They actually listened as there was nothing dire at stake. They could take some chances they might not otherwise.”

Watching the class, you could see the change. Most students let their guard down and allowed their new creation to inhabit them, which was the aim of the exercise.

The lessons students learned on Thursday are long-lasting, portable and transferable. They can take them into a career in the arts or a career in business—doesn’t matter.

“I know people who have left professional acting and gone on to other things,” Rosen says. “Some went into real estate, others into law, even politics. But they take the lessons learned in acting classes and on stage with them forever. The stage experience helps them develop a level of empathy and understanding. An awareness of how people exist in the world. Everybody’s experience is unique and we have to tune in and listen.”

In the workshop, students learned a person’s posture is comprised of many elements. Where they come from, what they’ve done, what their fears are. “We’re defined by our circumstances,” Rosen says. “Shaped by our experiences.” 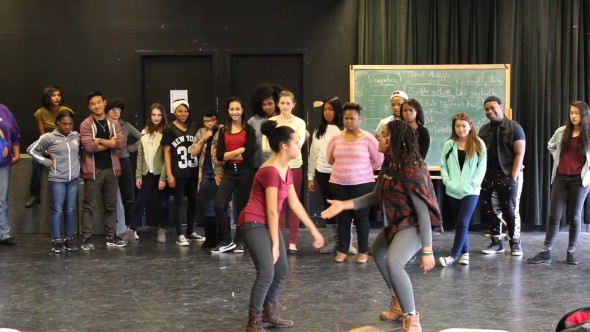 The lessons students learned on Thursday are long-lasting, portable and transferable. Photo by Jim Cryns.

For these workshops, Rosen says, “I tend to follow the same template. Sometimes it changes depending on how the students are responding. I deduce how many are with me mentally and whether I have to nudge them in a different direction.”

Rosen says it’s not any different from the way a comedian works the room.

While most in the workshop will not make theater their career, Rosen says he hopes he instilled a sense of doing your best at all times.

“I don’t know anyone in theater or life that gets very far mailing in their performance,” Rosen says. “Things are going to influence you in some way. Sometimes you’re tired or had a rough day. But if you prepare, tell the story as best you can on a given night, you will have some impact on the audience.”

The way Rosen tells it, you want to stay alive and in the moment, regardless of your surroundings. “Acting is not emotion, it’s truthful behavior in imaginary circumstances. I didn’t make that up, that’s wisdom from many people.”

On the stage, as in life, you have to improvise. In Cabaret, Rosen says, “it’s different every night, but I’m trying to tell a story, relate the moments of my character’s life. Even when I’m not the focal point on stage, I try to examine what I am in that moment. Don’t spin your wheels, commit to whatever you’re doing.”

That’s good advice for young actors, and for the rest of us.