Repairers of the Breach Program Coordinator Monica Walter was once homeless herself. 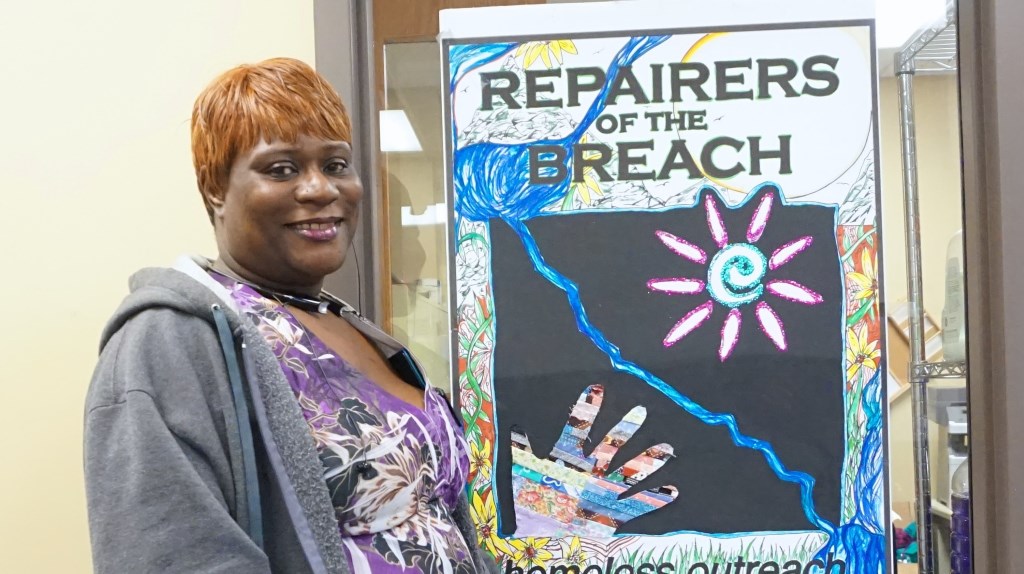 Repairers of the Breach Program Coordinator Monica Walter stands in front of her office inside the daytime resource center. Photo by Mark Siegrist.

A group of college students and professional women from the African-American sorority Alpha Kappa Alpha are preparing a noon feast of chili, chicken and all the trimmings for the homeless at Repairers of the Breach near 14th & Vliet. It’s a special day of service: the Dr. Martin Luther King, Jr. holiday.

An athletic-looking woman in her early 40s, dressed in a sweatshirt and jeans, is busy greeting shelter guests and volunteers alike. Repairers Program Director Monica Walter keeps her eye on the serving tables as she works the room. She remains cordial, but is growing a bit impatient. Nothing has been arranged yet. Finally she takes matters into her own hands. Walter grabs a wet towel, starts wiping down the surface, and invites others to begin lining up the food. Within seconds the corner is transformed into a restaurant-style buffet.

Her boss, the Rev. James West, Jr., executive director of Repairers of the Breach, has grown accustomed to Walter’s take-charge attitude and rapport with others.

“Monica is an asset to us. She can relate to people. She’s very compassionate, but she has a way of bringing an accountability without ruffling feathers. It’s just a gift that she has.”

Staff member Brian Brown, who himself was homeless for three months last year, knows just how direct Walter can be. 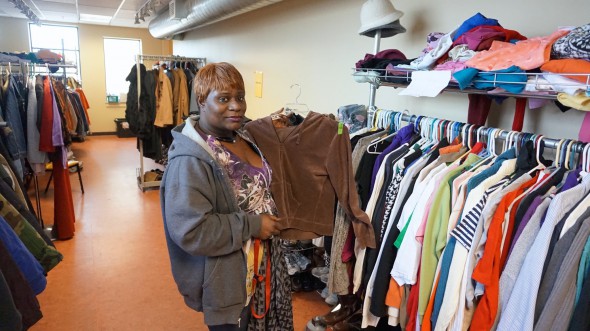 Walter, a street-wise woman, with an engaging personality, and a strong will for survival, honed her social outreach skills through personal pain and accomplishment.

She says her job as program coordinator at the Repairers daytime resource center helps keep her grounded. Her voice quivers a bit as she talks about shelter guests facing addictions, coming in tired, hungry, and in need of a shower.

“It’s just a constant reminder as to where I was, and where I don’t want to be, when I come in every day.”

Rewind Walter’s life story to about a decade ago and you get a much different picture. She’s quite candid about just how lost she was on the streets of Milwaukee.

“Let’s just say for 10 to 12 years I was lost. It’s a very nice word for what I was. Because I did everything under the sun. I think I stole, I cheated on stuff, I prostituted. You know, you go through a whole lot when you’re going through your addiction.”

Then suddenly one day Walter had enough, she said. The mental and physical fatigue of it all triggered an awakening.

“You know I never thought the problem was as big as it was until I sat alone that day by myself getting high. And I heard that voice say, ‘look at you. You didn’t even invite anybody to come with you.”’ “

That’s when Walter says she made a life-changing decision.

“I just sat up, threw everything I had in a bag, the pipe, the crack, the liquor. I threw it all in a bag, and I threw it out the window.”

Walter went on to get treatment. Soon she began volunteering at Repairers of the Breach.

Two years ago she was hired. Last year she became program coordinator, helping shelter guests transition from the street through a variety of services, including healthcare, job counseling and computer literacy.

She’s also taking night classes at Milwaukee Area Technical College toward an associate’s degree in business management. Walter said eventually she’d like to apply her ongoing education toward expanded programming at the nonprofit.

West said he couldn’t be more pleased. “She’s the perfect model and supporter for our center and our members here.”

He added that understanding the frustrations of life on the street, and the agitation that often comes with it, is essential to the program’s success. And he credits Walter for having that perception.

“It’s just a way she has of reading people. Meeting them right where they are, and helping them get focused into helping themselves out of their situation.”

According to Brown, “Miss Monica is a go-getter. When she gets on the phone, things get moving immediately.”

Despite her compassion, Walter is no pushover. She firmly believes her clients need to take the initiative to change their lives.

“I can’t do it for you,” she tells them. I’m not the one that’s living outside on the streets. So if you want to get off, you’ll follow through.”