So These Two Italians Come To Town 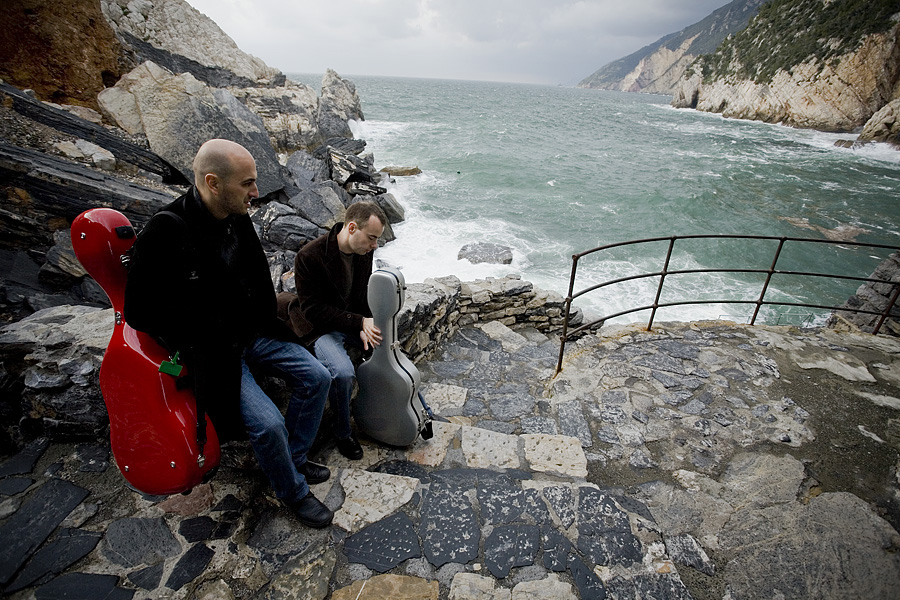 Italian guitarists Matteo Mela and Lorenzo Micheli, who’ve won an international reputation as SoluDuo, brought musical enchantment to the recital hall at UW–Milwaukee on Tuesday evening. The UWM Classical Guitar Organization and the Peck School of the Arts sponsored the concert, and host René Izquierdo, director of classical guitar, welcomed a small but avid audience for an evening of extraordinary virtuosity.

SoloDuo’s program, except for the encore and the opera overture, featured arrangements of keyboard music; it was great fun to hear the two guitarists produce a stunning panoply of colors in this wonderful and varied repertoire. Opening with three pieces by Domenico Scarlatti, the duo shaped every phrase with musical elegance and with simple gestures communicated as a single entity, breathing, stretching time, inflecting, and articulating each passage with like-minded intent. The classical guitar doesn’t have the broadest dynamic range, and in such intimate orchestration every note is laid bare. These performers created deft phrases, exact ensemble, multiple tone colors, and dynamic contrasts, making every nuance rich and meaningful.

Claude Debussy’s Suite bergamasque followed. Again, Mela and Micheli demonstrated their phenomenal artistic and technical virtuosity, playing Debussy’s transparent impressionism in watercolored waves as though he had intended all along for his music to be performed in this configuration. The Prélude sparkled, the Menuet tumbled, Clair de lune sighed as harmonics glittered like moonlight, and the Passipied atomized the air with dopaminergic happiness. (That happiness, incidentally, may have been all that kept some in the audience from dispatching the one person in the hall who felt that the performance of Clair de lune would be incomplete without the percussive addition of a persistent wet cough.)

Vincenzo Bellini’s Il pirata overture is quintessential Italian opera music. Not unlike the zither player gently plucking Strauss waltzes in the Hotel Sacher in Vienna, SoloDuo infused their performance of Bellini with stylistic authenticity in a character-filled rendition of the work that would have tickled Toscanini.

The second half began with Johann Sebastian Bach’s French Suite No. 5 in G Major, BWV 816. Before this, Micheli, using “Twinkle, twinkle, little star,” charmingly demonstrated the subtle dynamic and rhythmic shifts that define the so-called French style versus the Italian style. Then he went on to say, jokingly, that it would be impossible for them as Italians to play in the French style, as it would be like “a fish trying to be a bird.” Self-deprecation aside, their performance of the Bach was mesmerizing, and the grace and beauty with which they played the Sarabande is the reason people go to hear live music.

Just when it seemed impossible to imagine being more impressed, they duo wowed again, with a compelling performance of Ludwig van Beethoven’s Sonata No. 14 in C-sharp Minor, Quasi una fantasia, Op. 27, No. 2 (“Moonlight Sonata”). Passionate phrasing, perfectly balanced and blended sounds, and seamless exchanges of flashy technical ability rounded off a fulfilling program.

After extended applause, the two returned with an encore of Mario Castlenuovo-Tedesco’s Prelude No. 10 in B-flat Major, Allegretto scherzando, alla Rumba. This frippery, originally composed for two guitars, highlighted their musical charisma and tied a bow on an evening of exceptional mastery. If Milwaukee is ever fortunate enough to host SoloDuo again, don’t miss them. They are extraordinary.