The public television documentary “Milwaukee: A City Built on Water” helps explain and illustrate the historical and enduring importance of the Milwaukee River, Lake Michigan and other water resources in this city’s development as we move forward with various water initiatives.  In researching Estabrook Dam’s history, one of the most surprising findings for me were parallels between the recent water initiatives (that have transformed Milwaukee’s riverfront areas, and led to establishing the School of Freshwater Sciences and the Global Water Center), and the flood mitigation and park improvement projects completed in the 1920s and ‘30s which included construction of the dam. Consider these similarities: 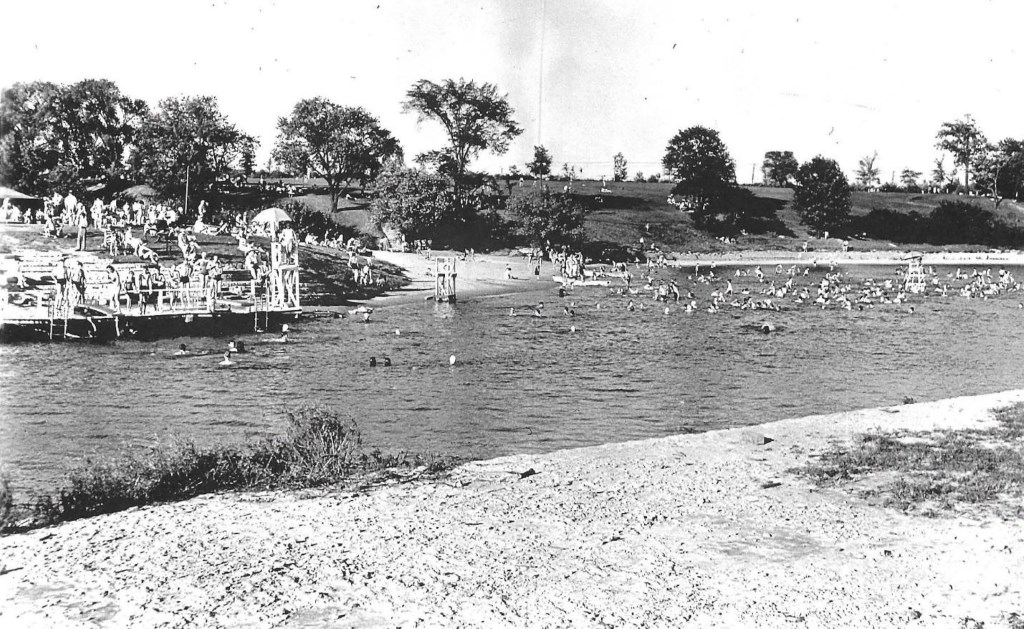 Estabrook Park Beach in 1937. It was located directly opposite the Blue Hole – a 15 acre quarry lake connected to the river that was used as a landfill by the City of Milwaukee beginning in the 1950s — a decision that, along with increasing water quality issues, ended use of this beach.

While the significance of these historic similarities to the current controversy is subject to debate, there is a human tendency to underestimate the achievements (and technical sophistication) of earlier generations. Swimmable rivers is still an unachieved goal for Milwaukee’s current water initiatives, whereas the projects completed in the 1920s and 1930s along the Milwaukee River (shown in the above photo) included construction of swimming beaches at both Lincoln and Estabrook Park, which were enjoyed by several hundred thousand residents per year during a brief “golden era” for swimming on the Milwaukee River. The Estabrook Dam should at least be considered in the context of Milwaukee’s history of water innovation, and the goal of a more naturalized river weighed against the achievements of these earlier projects – which mitigated flooding, enhanced recreational uses, preserved the drainage lake, while respecting the rights and concerns of property owners.

Looking forward, the adversarial process that has characterized the decision to remove or repair the Estabrook Dam seems at odds with Milwaukee’s current water initiatives. Flooding of rivers is a major global water challenge, and one that is projected to grow significantly over the next 15 years.  A study published in 2015 predicted that the global risks associated with flooding of rivers would triple over the next 15 years, with the associated annual costs from flood damage rising from £65 billion ($102 billion) to around £340 billion ($534 billion).  The challenge of designing engineered systems to alleviate flooding while trying to minimize the negative environmental impacts is a global water challenge to which the Estabrook Dam is relevant.

The current challenges associated with the dam appear well suited to innovations in systems to guard against power failure, to improve automation of the gates and to provide “real-time” control in response to rapidly changing flow conditions during a storm event, and to design a fish passage that could enhance recreational opportunities as well as reduce upstream flood levels. The possibility for this type of innovation to occur here seems even more plausible given Milwaukee’s status as a leading global center for industrial controls (Rockwell Automation), advanced batteries (Johnson Controls), emergency power systems (Generac and Kohler Power Systems), and use of real-time control systems for managing the flow of stormwater (work by the Milwaukee sewerage district). Estabrook Dam could provide a golden opportunity to demonstrate Milwaukee’s water-related innovations related to designing engineered systems to alleviate flooding while minimizing negative environmental impacts.

Perhaps the most important factor to weigh in evaluating repair versus removal is that a decision to remove the dam will be permanent. Due to the regulatory challenges with trying to permit any new dam in Wisconsin, building a replacement dam at some future date would likely be impossible. The option to remove the dam after its repair will always be a possibility, and the decision could be made at some future date once there are better data available to document the negative environmental impact of the repaired dam (if any), the flood impacts (if any), and the preferences of residents in neighborhoods that should be included in any future evaluation process.

Overall, the greatest challenge for this section of the Milwaukee River over the past eight years was completing the sediment removal project, which was an overwhelming accomplishment. Repair of the dam is a far smaller, less costly, less technically challenging project. It’s unfortunate that the acrimonious process and all-or-nothing legal battle has made it nearly impossible for any discussions to take place on how to most effectively implement the dam’s repair while moving forward with a host of other improvements and/or opportunities for collaboration.  If the adversarial process was replaced by a collaborative process that included repair of the dam, this alternative path forward might include:

The alternative path forward is removal of the dam. This will almost certainly lead to a series of lawsuits by property owners, and a continuation of the acrimonious relationship between environmental groups and property owners bordering the river. If a significant decrease in property values is proven to occur as a result of the dam’s removal, this will impact the long-term credibility of groups advocating for removal. More “bad news” will likely be reported on a regular basis, as other costs associated with removal become more apparent. For the Woolen Mills Dam in West Bend, the initial removal cost of $82,000 proved to be accurate, but ended up being less than 4 percent of a total of $2.3 million ultimately spent on improvements and restoration within the 61-acre former impoundment area.

All of which convinces me the decision whether to remove or repair the Estabrook Dam is hugely important to the future of this metro area. The issue deserves a full discussion of all the potential costs and benefits and collaborative opportunities of either decision.

22 thoughts on “A Freshwater Controversy: The Path Forward for Estabrook Dam”