Number has been dropping since 2001. Only 11 states have fewer public workers per capita.

By Tamarine Cornelius, Wisconsin Budget Project - Feb 3rd, 2016 03:52 pm
Get a daily rundown of the top stories on Urban Milwaukee 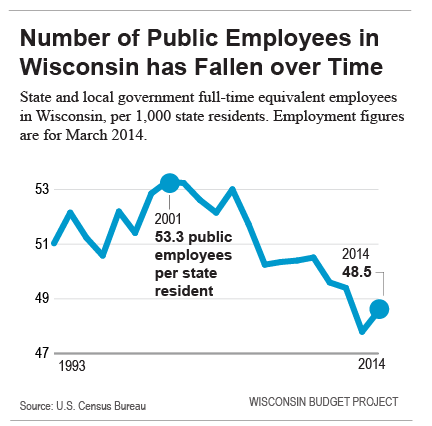 Number of Public Employess in Wisconsin has Fallen over Time

The number of government employees in Wisconsin compared to population has fallen over time and is now at among its lowest levels since at least 1993, the earliest point for which U.S. Census Bureau makes figures available.

In Wisconsin, about 1 out of every 7 jobs are in state or local government. 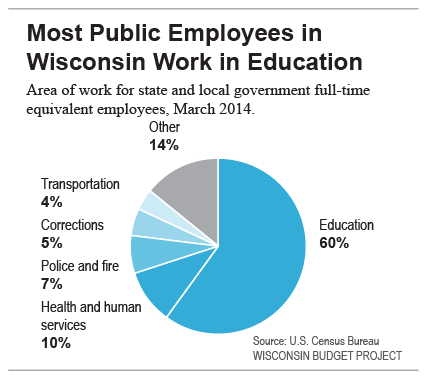 Most Public Employees in Wisconsin Work in Education

There are also significant concentrations of state and local government employees working in health and human services, police and fire, corrections, and transportation.

Most government employees in Wisconsin work in local government. Wisconsin’s public sector employed 278,600 FTEs in 2014, 74% of whom worked at the local level.

Wisconsin has long had a lean public sector compared to other states, and in 2014 the number of state and local government workers per Wisconsin resident stayed considerably below national levels. State-imposed constraints on property taxes and reductions in state support for local governments have likely contributed to the decline.

An efficient, effective public sector helps Wisconsin families and businesses thrive. Government employees teach Wisconsin’s children, repair our transportation network, and keep our communities safe — all activities that help make Wisconsin a good place to do business and raise families. If the number of workers doing these jobs dips too low, the quality of life of Wisconsin residents and the state’s economic competitiveness will be harmed.