A downtown office building would be partially converted to apartments under a proposal by Keystone Development. Built in 1925 and located at 808 N. Old World Third St., just north of Wells St., the Century Building would be transformed by Keystone, which would convert its top four floors to 50 apartments. The Century Building, which is considered part of the Westown neighborhood, is currently home to a diverse number of first-floor retail tenants and smaller office tenants on the upper floors.

Keystone’s plans are contingent on receiving federal low-income housing tax credits from the Wisconsin Housing and Economic Development Authority (WHEDA). According to its application, Keystone would reserve 42 of the 50 units for qualifying low-income tenants. In exchange, WHEDA would allocate $447,169 in credits to Keystone, which could either apply those credits to their own taxes or sell them. Keystone, an Oshkosh-based developer led by Cal Schultz, would acquire the building from a local investment group led by Ron San Felippo.

The eight-story building has 111,894 square-feet of space, and is classified as a “Class C” office building, according to city records. The building has a number of first-floor commercial tenants, including a George Webb restaurant, 414 Glass & Grooves store, Quality Optical eye-care studio, hair salon, convenience store and a popular Vietnamese & Hmong sandwich shop Xankia.

Despite the lack of housing in the area, the proposal isn’t getting glowing reviews from downtown alderman Robert Bauman, who is also a tenant of the building.

Bauman is concerned about the number of office conversions taking place downtown, including at the Germania Building and Northwestern Mutual,  and their effect on the one- and two-person “classic small businesses” that rely on “low-rent commercial space” in the central business district. “It would be one thing if the building was empty,” he notes of the Century Building, but “it’s pretty well full.” He says Downtown has lost employers to the suburbs as a result of similar conversions.

Bauman adds he is “all in favor of residential” for the area and has just the spot for it: “The entire vacant lot across the street.” That lot was cleared as part of a failed urban renewal effort decades ago.

But because the proposed project complies with zoning, “the city has no real say in this,” Bauman notes. A developer’s dream, a politician’s worst nightmare.

The project is within a stone’s throw of the Germania Building, which will see construction start soon on an office-to-apartments conversion led by the Vangard Group. When finished that project will have 74 two- and three-bedroom apartments.

Milwaukee history buffs will note the Century Building has one of the last manually operated, public elevators in the city. OnMilwaukee.com did an informative profile on the last two operators in early 2012, when operator Jim Wodke was about to celebrate his 20th year on the job at the Century Building. And he’s still there today. Will the elevator be modernized to eliminate his job? We were not able to reach Schultz to ask.

Visitors and passersby will note the numerous, well-preserved architectural details of the building. The lobby still retains the elegance and original layout from when it opened. The building’s facade and cornice still contain much of the original ornamentation (see our gallery). The first-floor facade has clearly been significantly altered over time, but not to such a point that it couldn’t be restored in an aesthetically pleasing manner. A self-guided tour of the building reveals that many of the floors have been substantially modified (most visibly with drop ceilings), but a number of interior doors that could be original to the building are still in use. All-in-all, for a building of its age and class, it’s in impressive shape. The building is not historically designated by the city, state or federal government.

This won’t be Keystone’s first foray into the Milwaukee market, nor its first adaptive reuse project. The firm acquired the building that formerly housed Antiques on Second in November and is working to convert that building to 55 apartments. That project will be known as the Shoe Factory Lofts when complete. Keystone is making use of low income housing tax credits and historic preservation tax credits to help finance that project.

The firm has also developed the Ridgewood, Westridge and White Birch apartments on the city’s northwest side. All of these projects were built with low-income-housing tax credits. 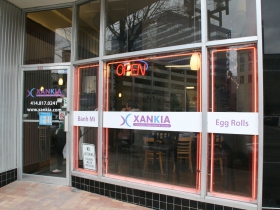