By Jon Peacock, Wisconsin Budget Project - Jan 20th, 2016 11:48 am
Get a daily rundown of the top stories on Urban Milwaukee 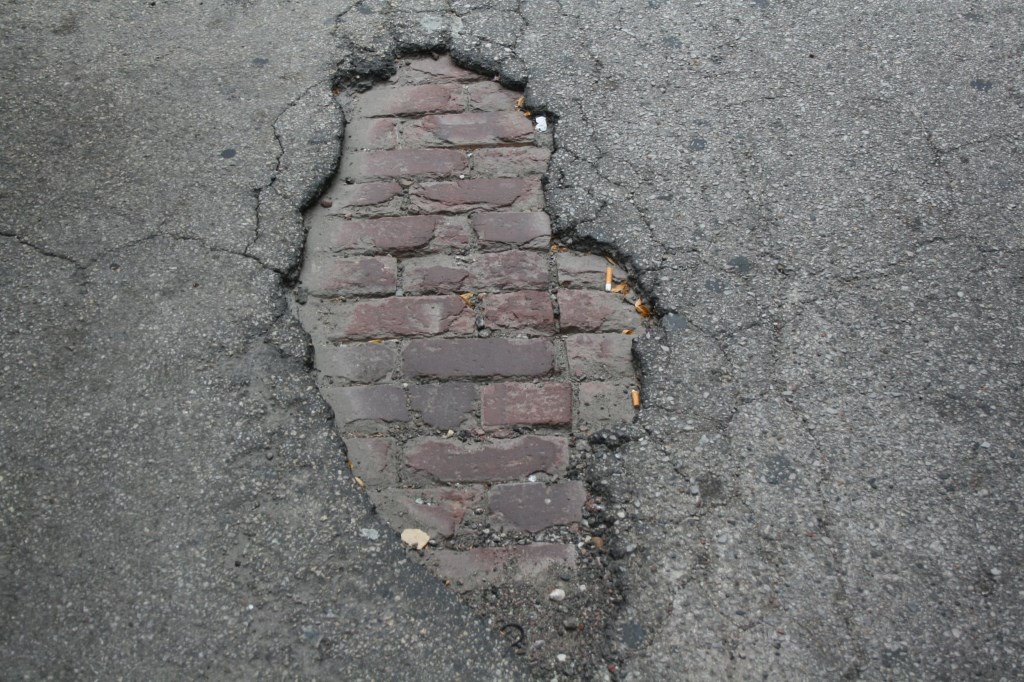 Brick pavers are exposed as the asphalt has crumbled away. Photo by Jeramey Jannene.

Proposed legislation to fix local road repairs is a bad deal for poor Wisconsinites who don’t have cars. The proposal would authorize a sales tax increase that would fall more heavily on poorer Wisconsinites because the sales tax takes a higher percentage of their income. What makes that particularly inequitable is that the bill precludes using any of the new revenue for transit (e.g. bus and van service).

The bill in question, AB 210, would create a local option for a 0.5% increase in the sales tax – under the following conditions:

In a recent Urban Milwaukee column, Steven Walters discusses the bill and describes it as the “pothole repair act,” which I think is a pretty good description – although the allowable purposes were expanded in Assembly Substitute Amendment 2 to include road and highway construction, as well as repairs. Walters explains that the bill appears to have broad, bipartisan support. In fact, it was unanimously recommended by an Assembly committee.

Funding for local services, including road repairs has been squeezed from many directions, including cuts in Shared Revenue, state-imposed limits on property taxes, a long freeze on the gas tax, and increased spending for highway construction. With that in mind, it’s not hard to understand the support for a bill that would give voters the option of approving a new source of funding for local transportation spending.

On the other hand, there a couple of significant areas of concern about AB 210 that have been raised by advocates for disadvantaged Wisconsinites and the environment:

Optimally, I think any increase in funding for road repairs (and especially for construction) should come from a user fee – preferably a small increase in the gas tax. At a time when we need to take steps to discourage energy consumption in order to reduce global warming, increasing the gas tax and boosting financial assistance for transit would be much more appropriate fiscal choices.  But if legislators are intent upon approving the sales tax option, at the very least they should amend the bill to give local governments the discretion to use the new revenue to make investments in transit services.

WISDOM, which is a faith-based group that works on social justice issues, made the following points in a recent action alert asking legislators to oppose AB 210 unless local governments are given the option to use some of the new funding for transit purposes:

Transit funding was cut by 10% in the 2012-14 state budget, which resulted in the end of some bus routes, shorter service hours and in some communities, a complete loss of transit service. The problem was made even greater when the state reduced shared revenue to local communities, leaving them with less capacity to support their local systems.

I suspect that some conservative legislators will vote against AB 210 because they won’t support a bill authorizing any sort of tax increase – even one that simply gives voters the authority to approve a local revenue source. If that assessment is correct, progressive legislators might have leverage to insist on modest changes that make AB 210 a better bill.

I hope legislators in both parties will agree with me and WISDOM that the bill should not be enacted unless it is amended to allow local governments to use the new revenue for transit.