By Brendan O’Brien, Milwaukee Neighborhood News Service - Dec 23rd, 2015 10:44 am
Get a daily rundown of the top stories on Urban Milwaukee 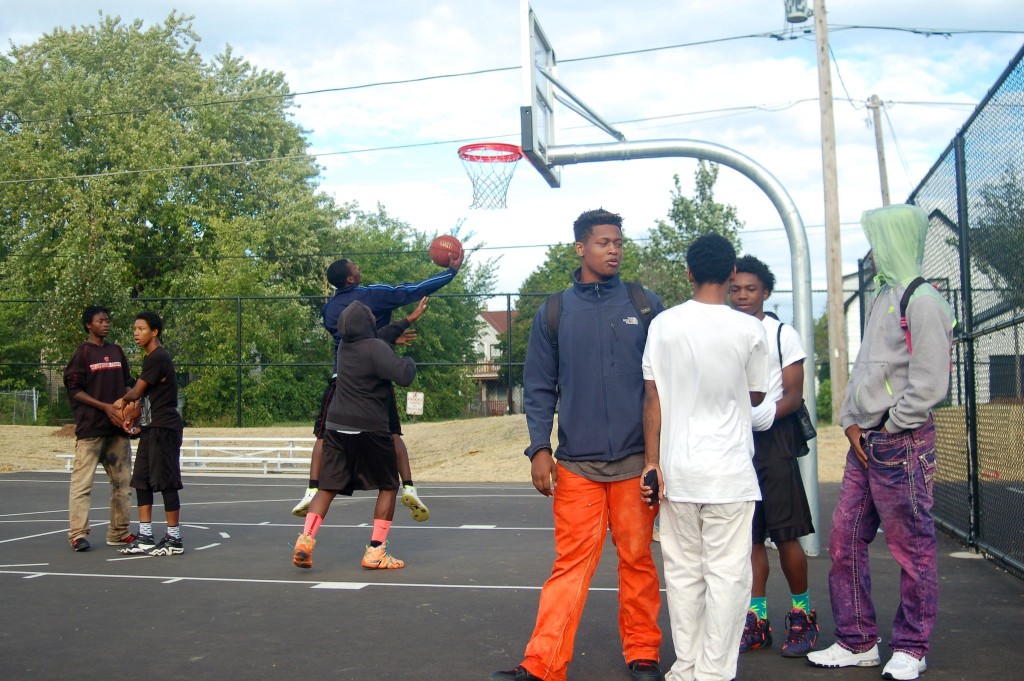 Young men wait their turn to play basketball during the opening day celebration at Moody Park. Photo by Edgar Mendez.

Milwaukee ranks in the top third of major U.S. cities in its effort to create an environment for black males to meet their educational, work and personal life goals, according to a recently published national index that measures black male achievement.

Milwaukee scored 63 out of 100 points, ranking it 16th out of 50 U.S. cities, right below Chicago and just above Newark, N.J. in the Campaign for Black Male Achievement City Index. Detroit, Oakland and Washington, D.C. were the top three cities.

The national Campaign for Black Male Achievement created the new index that measures such factors as the presence of national initiatives to support black men and boys, and funding to support this demographic group in 50 major cities. 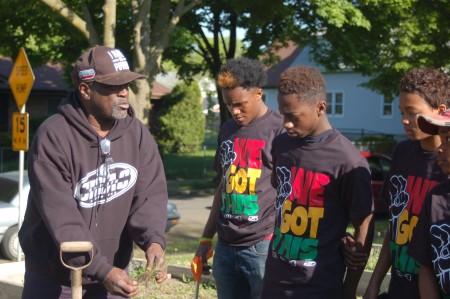 Andre Lee Ellis (left) runs “We Got This,” a grassroots mentoring program for young black men in Milwaukee. Photo by Andrea Waxman.

The index also measured city-led commitment to black men and boys and the presence of leaders and organizations working toward black male achievement. The 50 cities in 29 states are home to more than 5.5 million black men and boys, representing more than 30 percent of black males in the United States, according to the report.

What the city as a whole does well “is look across sectors, whether it is the philanthropic community, the non-profit sector, the faith community or the different levels of government. We are really engaged in those levels of perspective and we do that better than most cities,” said Jeffery Roman, benchmark coordinator of minority male achievement at Milwaukee’s Public Policy Institute.

Milwaukee fared relatively well in terms of the number of organizations and initiatives that are involved with black male achievement in the city, the index showed. It made special note of the city’s Earn and Learn program, which has employed more than 22,000 teens — 83 percent of whom were minority — and raised more than $4.5 million since 2005. It also mentioned Compete Milwaukee, a new program that bridges private sector employer demand with workforce supply. The city funded 135 transitional jobs in 2015 under this program.

But, according to Roman, while there are many voices and perspectives at the table, Milwaukee struggles to create a united front and infrastructure where ideas and solutions can flourish.

For example, Milwaukee has several organizations such as the Lifecourse initiative for Healthy Families, Beyond the Bell and the Milwaukee Fatherhood Initiative that work in different ways to improve the lives of young black men, but they do not coordinate their efforts to create an environment for black male achievement, Roman said.

“We don’t lack any services, any programs or any resources in this community. What we lack is a vision … to connect those dots,” he said.

Dell Williams, a project coordinator at the Milwaukee Fatherhood Initiative, said he sees the lack of coordination play out in the low number of safe recreational places for children in Milwaukee.

“There are a few structured things that go on … but there are not enough. There are a lot of playgrounds and buildings that could be utilized by programming for kids to have a safe environment,” he said.

Williams, however, said has seen progress in creating an environment for black male achievement in public education, namely at schools such as Dr. Martin Luther King, Jr. School, 3275 N. 3rd St., where black male teachers and community members play an active role in setting a positive example for young men.

“That’s where it starts and then it has to spill over into the community as far as jobs are concerned,” he said.

According to the index, Milwaukee lags in educating black boys. For example, only 5 percent of eighth- grade black males are at or above proficiency in reading, compared to 12 percent nationally. That spells trouble later in life for black men in Milwaukee, who earn an average of $33,000 a year, compared to the $44,000 on average made by black men nationally, the index showed.

“If there aren’t family-sustainable jobs, then there is going to be a problem with crime like we see in Milwaukee right now,” Williams said.

Williams said that while the index shows Milwaukee has a lot of work to do, he finds hope in the kind of engagement that exists in the city.

A lot of organizations “are doing a phenomenal job at trying to set an environment where black males can be nurtured to become productive members of society,” he said.