Walker and Republicans are methodically working to end any scrutiny of their actions. 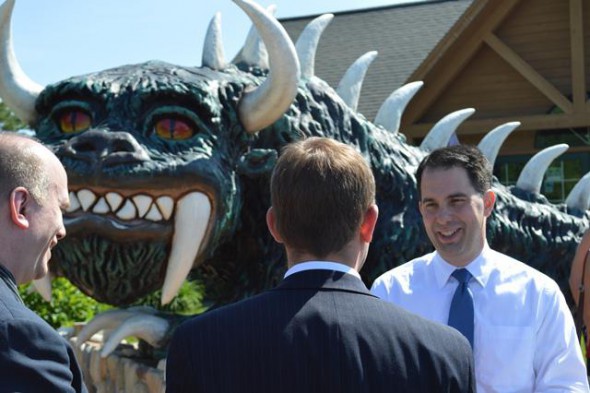 Governor Walker greets people outside of the Rhinelander Area Chamber of Commerce during the “Working for Wisconsin” tour. 7/2/13. Photo taken July 2nd, 2013. Photo from the State of Wisconsin

The latest attempt by Scott Walker to end transparency in government begins with an obscure agency called the Wisconsin Public Records Board, which has created in 1947 and which I suspect many journalists (including me) had never heard of. Its rather dull history was recently traced by the Cap Times because the Public Records Board has ironically been instrumental in making state records less public.

Over the years, this board has mostly made decisions for how to classify records that are already public under the law, with a view to make sure there is a historical record and determine when records should be sent to the depository at the State Records Center. At its meeting on August 24, however, the board voted to change the definition of what is a “transitory record.” Up to then it had been considered “Correspondence and other related records of short term interest which have no documentary or evidentiary value.”

But at the August meeting the board voted in favor of language adding many examples of transitory records, including “Routine agency communications or announcements; Information that does not direct action, or require compliance; Records that don’t relate to the recipients work or decision-making… Emails to schedule or confirm meetings or events… Interim files” and “Ad hoc reports for individual use.”

Not long after this meeting, Gov. Walker’s administration refused a records request from the Wisconsin State Journal, saying the record was a “transitory” one and “transitory messages are not required to be retained.” The State Journal had requested any communication, including electronic messages, from state officials regarding their efforts to funnel taxpayer money from the much-troubled Wisconsin Economic Development Corp. to a struggling Milwaukee construction company owned by a top Walker donor which received a $500,000 state loan it did not repay. But the newspaper request was turned down due to this new rule on “transitory messages,” which appears to create a huge exception to the open records law.

Adding further irony, the Public Records Board’s decision to add restrictions to public records may itself have violated the state open meetings law. On Monday The Wisconsin Freedom of Information Council filed a complaint with the Dane County district attorney against the board, alleging violations of the law.

Bill Lueders, the council’s president, argues in the complaint that the board failed to provide adequate notice of the meeting’s subject matter in the agenda, then failed to record the actions taken in the meeting’s minutes. “That meeting, the agenda item, was not properly noticed,” Lueders complained to WUWM-FM. “You could look at that agenda from here until eternity and not know that they were going to dramatically change the definition of what a transitory record was, so that public officials could begin destroying any record they felt like destroying.”

Walker has repeatedly distanced himself from the issue. “The Public Records Board has been in place long before the governor took office and has received no directive from our office,” Walker spokeswoman Laurel Patrick recently told the Milwaukee Journal Sentinel.

But, in fact, the governor has effective control of the Public Records Board, as he appoints four of its eight members, while a fifth is appointed by the Republican Attorney General Brad Schimel. It seems unlikely Walker’s appointees operated without his knowledge when voting to add these suddenly convenient restrictions to public records.

The scenario is similar to what happened last July, when Walker for several days avoided talking about a proposed state law that would have severely curtailed open records. Only after legislative leaders revealed they had conferred with Walker did the governor finally admit his involvement. In fact, the language in the bill was originally crafted by his staff: it was similar to the wording his office had used to deny previous records requests, arguing that documents used during the “deliberative process” by any policymakers would be exempt from public disclosure. As written into the proposed law, that would include opinions, analyses, briefings, background information, recommendations, suggestions, drafts, correspondence about drafts, as well as “notes created or prepared in the process of reaching a decision concerning a policy or course of action,” and would have protected both the governor and legislators and their staff.

Walker backed off from the bill after a hailstorm of criticism, but the governor and Republicans clearly still want to limit open records and transparency in government:

-After the legislature backed off from the July bill decimating public records, reporters learned Assembly Speaker Robin Vos (R-Rochester) had continued to work on the issue behind the scenes.

-The Walker administration continued to insist that email records involving the deliberative process were not public records and has refused to provide such information in response to 12 different open records requests by the media.

-The Walker administration used the same rationale to refuse an open records request from the Center for Media and Democracy, (which asked for records related to a failed proposal to throw out the venerable “Wisconsin Idea” and rewrite the UW System’s mission statement) and is still using that defense in response to a suit by that group demanding the records.

-The GOP-controlled Legislature recently passed a law just signed by Walker that adds a veil of secrecy to campaign donations; it removes the requirement that campaign donors disclose where they work, making it harder to trace legislation written to benefit certain businesses or industries.

-The legislature also passed and Walker signed separate laws eliminating John Doe investigations of political corruption and killing the Government Accountability Board and replacing it with an ethics commission and elections commission that cannot do any investigations without getting funding from the Republican-controlled legislature. This effectively killed the GAB and its watchdog role and will open the door to unchecked political corruption, experts have suggested.

-Walker and Republican legislative leaders are still pushing to eliminate the civil service system that has been in place in Wisconsin since 1905. The rationale for this change is specious, as I’ve noted, and the likely result is that political appointments rewarding loyal Republicans will replace merit-based hiring. These loyal Republicans will also help make sure state government can operate in secrecy, with no scrutiny from the media or anyone else who isn’t on the GOP team.

It’s breathtaking to contemplate all these changes to help give unchecked power to Walker and Republican leaders. It amounts to what may be the most radical power grab in state history.

Update 10 a.m. December 18: A new story by the Wisconsin Center for Investigative Journalism quotes two former Walker cabinet members saying a top Walker aide instructed them not to use the state phones or email for public business.